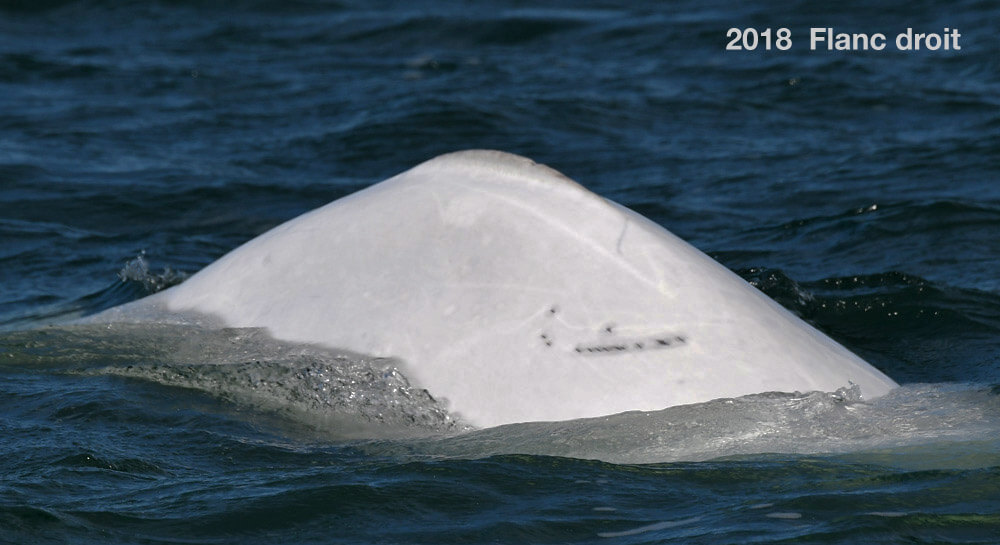 Avantage Saint-Laurent’s scar is conspicous. Several small dots form a crescent moon on its right flank. As of now, this individual has never been identified from the left flank. 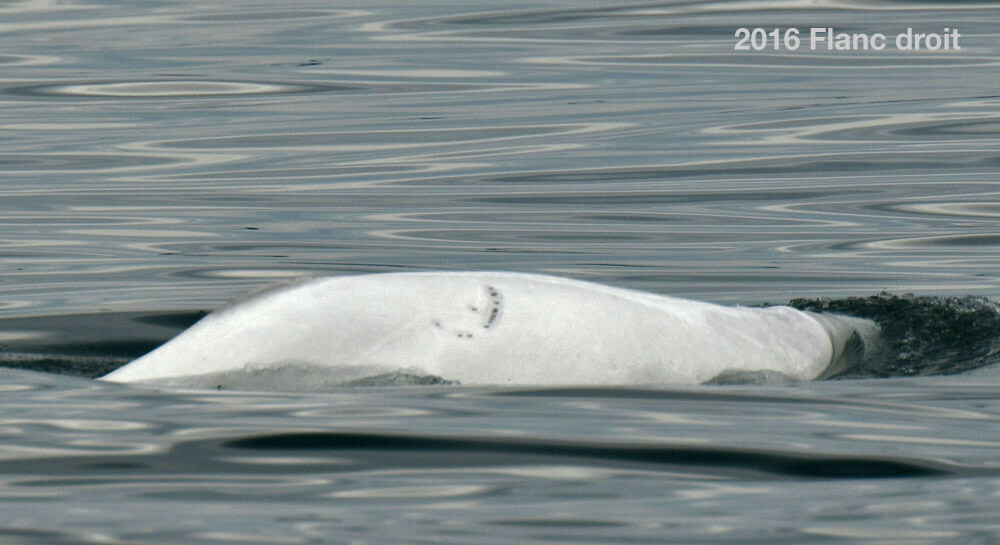 When we first encountered Avantage Saint-Laurent in September 2016, it was pale grey, meaning it was a young adult. We saw it again in the summer of 2018, and its colour was still slightly grey, almost white. Belugas fade from grey to white in colour between the ages of 12 and 16, Avantage Saint-Laurent was thus born around 2004.

In summer, there is a pronounced segregation between adult males and females; females live in community with young, while males are often found in unisex herds. To date, we have observed Avantage Saint-Laurent in various sectors in the company of females, but also with males. Without a biopsy, we cannot confirm its sex.

Did you know that Avantage Saint-Laurent is the third name given to this beluga? In 2019, it officially entered the St. Lawrence beluga photo-identification catalogue as DL2503, DL9071 became DL2503. Belugas numbered in the 9000s are recently observed animals for whom we don’t have an abundance of information. Once we have accumulated a sufficient number of contacts with the individual to be confident that we will be able to recognize it from any angle, we assign it a number in the 2000s and it becomes officially catalogued. Stratégie Maritime adopted the DL2503 beluga whale in 2019 and named it Avantage Saint-Laurent in 2021.

Aboard GREMM’s research Zodiac BpJAM, we set out at the crack of dawn. The cloudy day provides good visibility. Out on the water, the wind creates small ripples. We head upstream, and in the waters around Anse du Chafaud aux Basques, between Baie-Sainte-Catherine and Baie-des-Rochers, we cross paths with a herd of about 50 individuals composed mainly of adults.

The herd cannot be approached easily, and the animals disperse.

We start to photograph them in an effort to identify them. For the first few minutes, the belugas are treading water and then, little by little, they set course for Saint-Siméon. At the peak of high tide, the animals branch off and are now heading toward the south shore. It is at this moment that we identify the distinctive crescent-shaped scar of Avantage Saint-Laurent. On the surface, tails and heads poke out above the water. After photographing each individual, we continue on our way in search of another herd.

Stratégie Maritime adopted the DL2503 beluga whale in 2019 and named it Avantage Saint-Laurent in 2021.