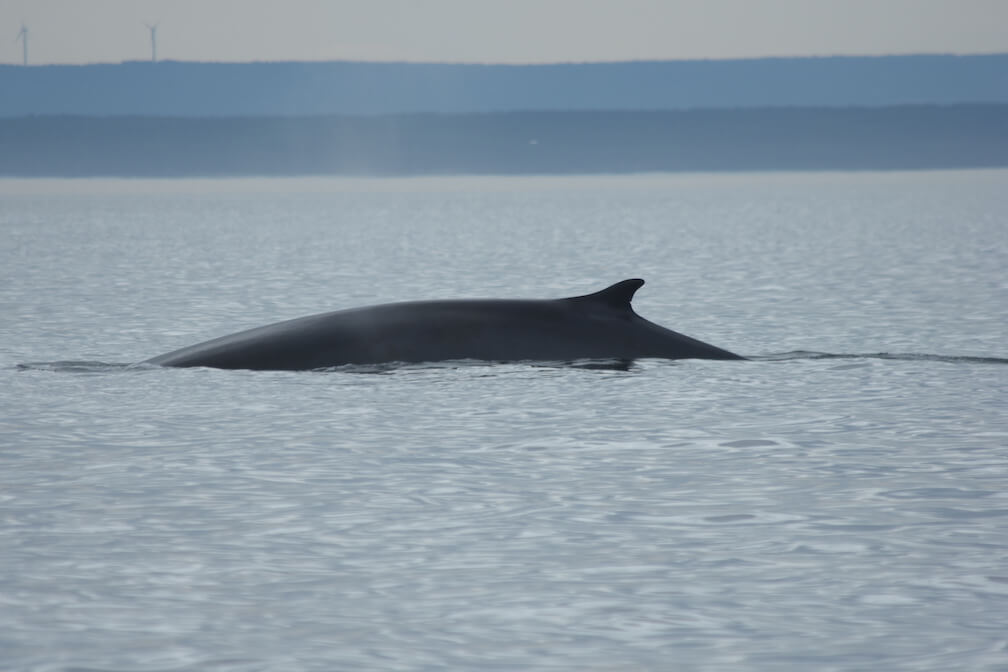 Omega is a fin whale recognizable by the conspicuous white spot shaped like an infinity symbol (or the number “8”) just to the right of its blowhole. Its dorsal fin is slightly curved and has a small notch at the base; this notch appeared in 2015. 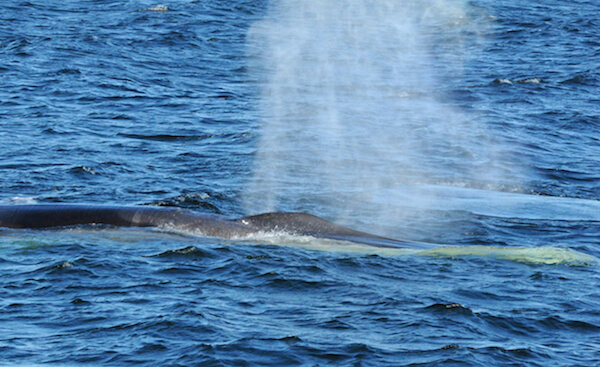 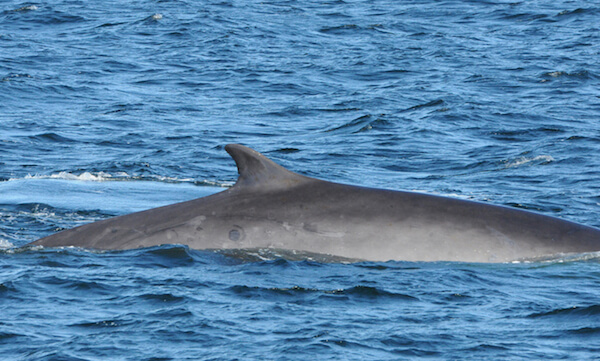 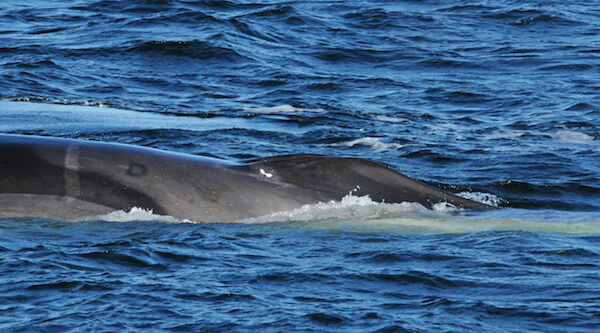 Bp929 arrived in the Marine Park in early August and is one of the fin whales that have been observed off Tadoussac in small groups numbering a handful of individuals. In 2019, she was named by captains, naturalists and scientists Omega.

Bp929 was observed in the area last summer in August. This year it returned in June! In 2015, Bp929 came back to the Estuary with a notch at the base of its dorsal fin. A deep cut can be seen on its peduncle, i.e. the base of its tail. These scars are most likely attributable to the rubbing of rope wrapped around its body. Since 2018, the Mingan Island Cetacean Study (MICS) has been using drones to study entanglements in fin whales and blue whales. Preliminary results show that nearly half of all individuals show entanglement marks. Bp929 and its fellow right whales are therefore more likely to find themselves ensnared in ropes than previously believed. In this species, more than 80% of individuals get entangled at least once in their lifetime.

Bp929 arrived in the Marine Park in early August and is one of the fin whales that have been observed off Tadoussac in small groups numbering a handful of individuals.

The abundance and availability of prey such as fish and invertebrates are the main influencing factors of the summer distribution of whales. Food preferences vary from one species to another: zooplankton (krill, copepods, amphipods) or small fish (herring, capelin, sand lance, mackerel, etc.).

The blue whale is rather stenophagous, which means its diet is very restricted and composed of a small number of different prey. In the North Atlantic, this giant of the seas feeds on krill, more precisely three species of krill: Thysanoessa inermis, Thysanoessa raschiiand Meganyctiphanes norvegica. It also sometimes feeds on copepods.

The fin whale on the other hand is more opportunistic and may vary its diet according to the time of year and the feeding areas it frequents. For example, in Loreto Bay (North Pacific) in winter, fin whales feed almost exclusively on krill. In summer, they hunt schools of fish in the northern Gulf of California.

The stomach contents of some humpback whales in the northern hemisphere were analyzed and, although prey varied from one individual to another, the stomachs were often filled with a single species such as herring, capelin, sand lance or pollock. Some individuals may even eat benthic organisms (those that live in the seabed), which is more unusual for a whale. Humpback whales have a variety of techniques for hunting schools of fish, the best known of which is the formation of a net or curtain of bubbles to concentrate their prey. They also sometimes slap their tails on the water surface to frighten and concentrate their prey. This way, their “bites” are maximized.

Minke whales are the most opportunistic whales with the most varied diet. They adapt their diet according to the availability of prey in their environment, sometimes feeding on krill and sometimes on fish. They have a preference for organisms higher on the food chain such as carnivorous fish/prey. Their greater metabolic needs require this kind of prey, which contains more energy than zooplankton. Minke whales develop highly specialized techniques depending on the type of prey they are hunting and the environment in which they are feeding.