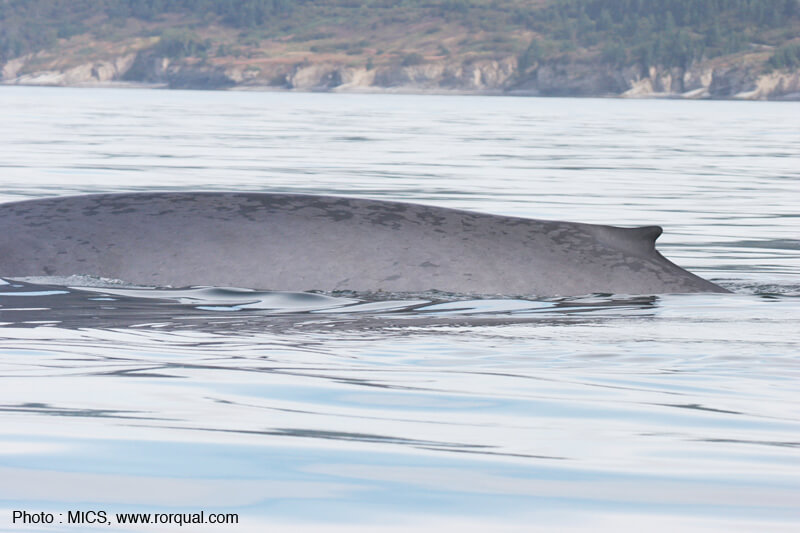 Since last July 28, the Saguenay-St. Lawrence Marine Park has been host to no less than four blue whales, including Bird of Prey. Bird of Prey is a male that has been known since 1991 to researchers at

Sur le site du MICS, where he also bears the identification code B261.

Bird of Prey, a seemingly irregular and somewhat nomadic visitor, has until now been observed mainly in the Estuary, with sightings in 1991, 1992, 1993, 1994, 1999, 2001 and 2005, as well as in the vicinity of Gaspé in 2006. Further, we should mention that these two sectors are surveyed by transects this year by a team composed of Fisheries and Oceans Canada, MICS and Alaska Sealife Center in the context of the 2nd season of satellite telemetry of blue whales (see Portrait de baleines from last July 21). Will they succeed in placing a satellite tag on this strange bird?

Largest animal of all time, the blue whale is now protected, having become rare due to overhunting which persisted until 1955. To aid its recovery, we must notably avoid getting overly close to this wary behemoth so as not to disturb its next meal, or, if done repeatedly, affecting its health or its ability to reproduce. This measure is part of the : Marine Activities in the Saguenay-St. Lawrence Marine Park Regulations, and members of the Eco-Whale Alliance have undertaken to follow it even outside the Protected Marine Area. A little boost for this mythical whale!

The blue whale consumes a tonne of krill a day and thus feeds nearly continuously when it encounters them. Krill, small planktonic crustaceans, drift with the currents and accumulate in immense clouds in certain favourable zones, including in the Marine Park, which is a particularly rich feeding area.

Not to be missed: the jaws of a blue whale on display at the CIMM in Tadoussac: 6 m, or a quarter of the length of the animal!