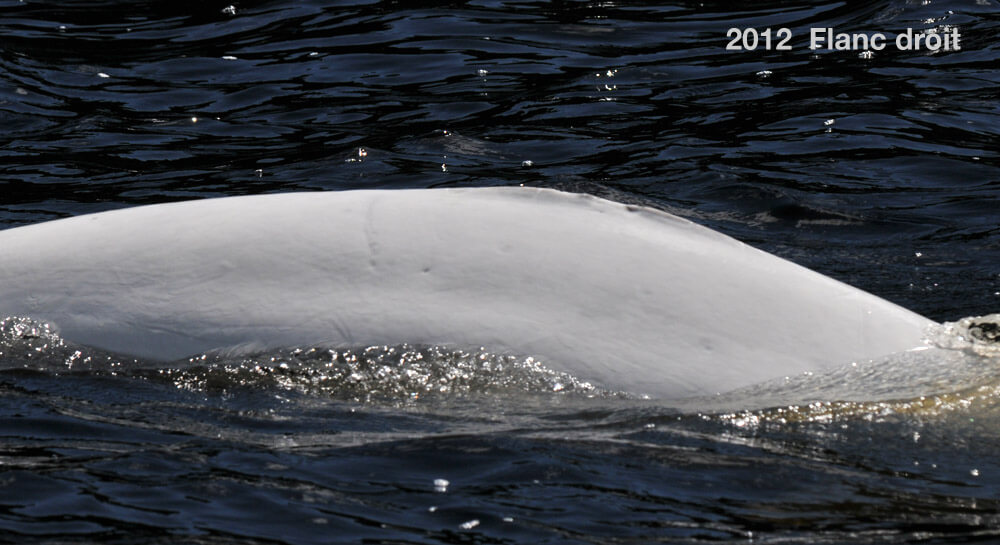 Adopted by clients of Maison Simons

Artsea’s crest is recognizable from both sides by its two large jagged gashes. On the left flank there is a black spot where the two gashes end. Her right flank shows a white line and a spot at the beginning and end of the gash. 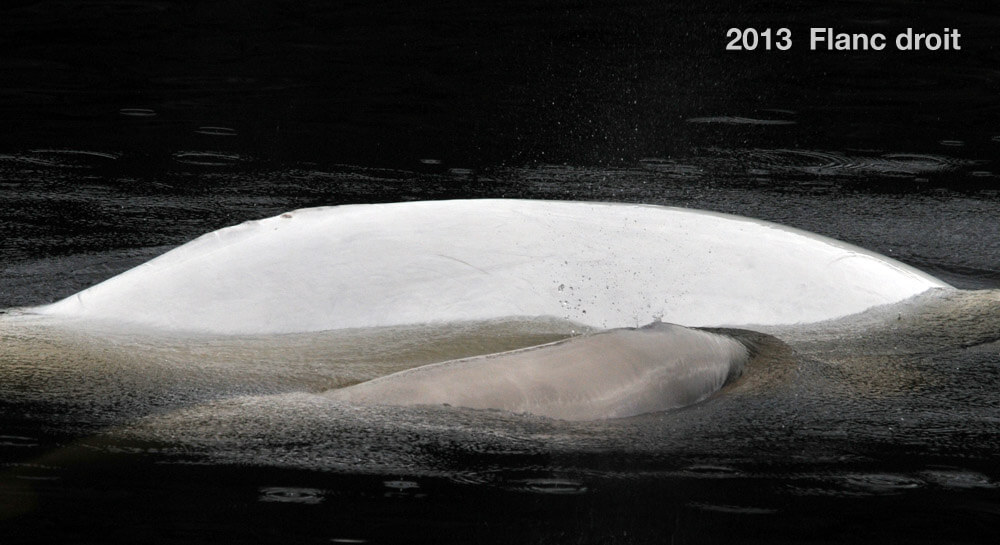 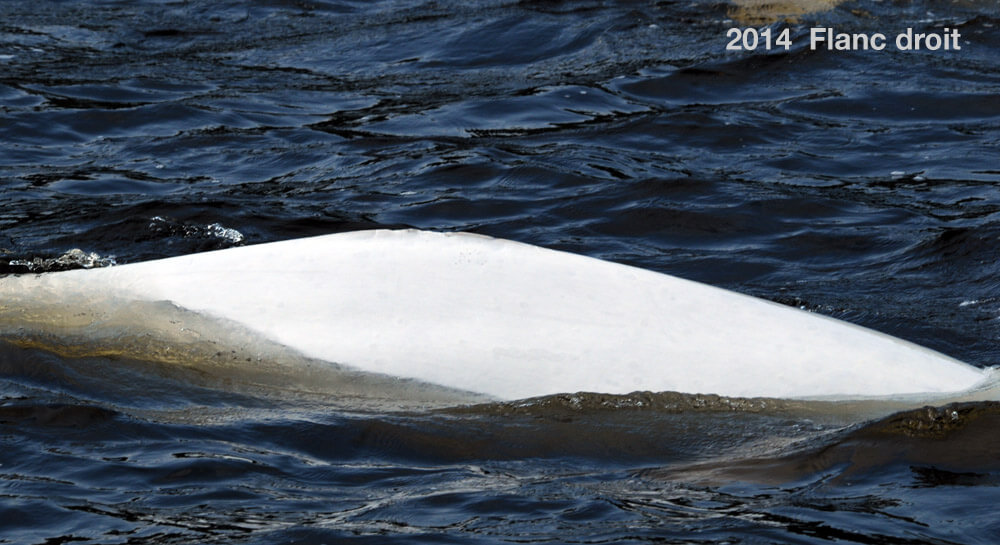 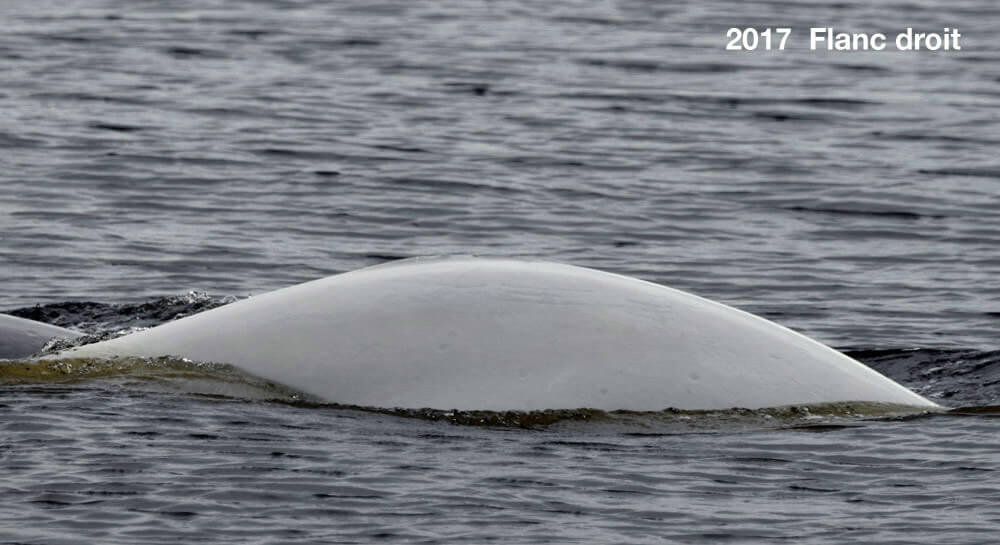 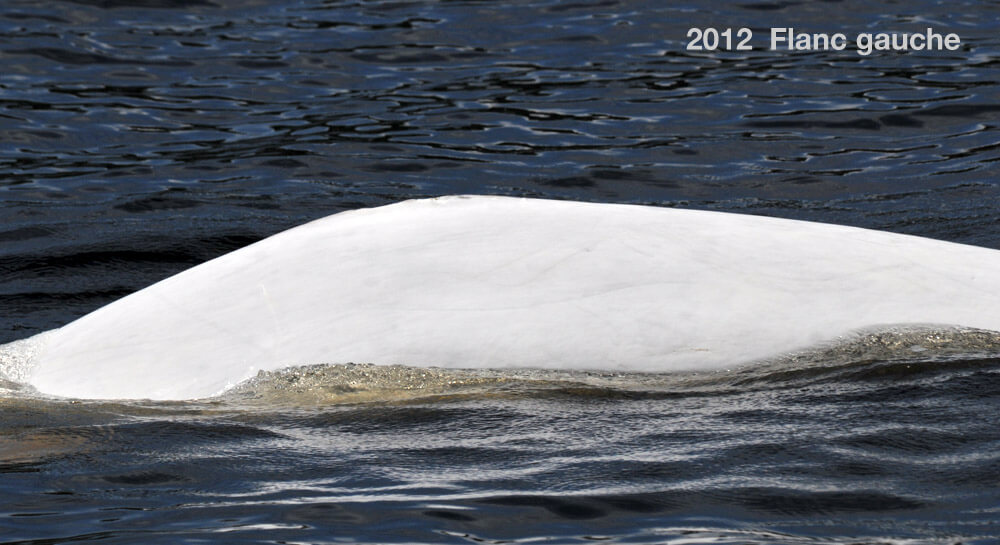 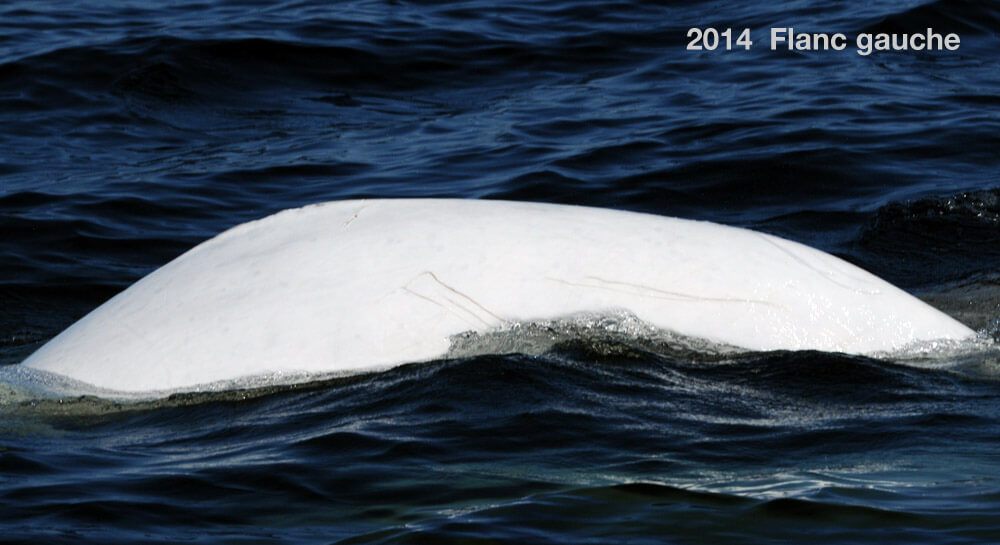 At the time of our first encounter, Artsea was gray and small, signs that she was still very young. When we observed her most in 2015, she was still slightly gray, but had reached her adult size. The transition from gray to white in belugas generally occurs between between the ages of 12 and 16 years. All this leads us to believe that Arsea is approaching her twenties.

Her size and her associations suggest that Artsea is a female. In their summer range, females form large communities in which they care for newborns and young. Artsea has been regularly seen in groups of juveniles and adults, some of which were accompanied by calves. She was also observed with a newborn in 2013, but it is impossible for us to say whether it was hers!

Our research assistants undertook the meticulous analysis of some 13,000 photos collected throughout the summer of 2018. Thanks to this exercise, we were able to conclude that we spotted Artsea at least five times, including four sightings in the Saguenay! Below is an account of one of these encounters.

Today, we’re heading up the Saguenay on board the Zodiac-like research craft BpJAM. We are carrying out a project that aims to study beluga behaviour with the help of drones. Mathieu operates the craft and photographs the belugas while Albert flies the airborne camera whenever needed. A herd of belugas moves in behind the Zodiac. We observe: the animals are mostly juveniles. We also identify a newborn. Given that calving takes place in July, it must be just a few days or a few weeks old. Amongst the females present we identify Artsea and Dorothy. Last year, Artsea gave birth to a calf; will we manage to recognize her offspring in this group? We release the drone to observe the animals, but the wind picks up. Part of the herd moves deeper into Baie Sainte-Marguerite. This year, watercraft are forbidden from entering the bay in an effort to offer belugas a peaceful sanctuary. Fortunately, the team posted on top of the tower can photograph them for us. A new group joins the heard, which brings our count up to 35 individuals.

The Bleuvet is sailing between Pointe Noire and Îlet aux Alouettes. Waves of about a foot high rock the boat and a 15 km/h wind picks up. Nevertheless, visibility is a good 5,000 metres and gives us hope of spotting belugas from afar. Incidentally, a herd of about fifteen individuals appears on the horizon. Among them, we can make out adults, young and two café-au-lait-coloured newborns. The animals are diving in every direction, forcing us to focus on one small group. Good news! Artsea is swimming with a newborn at her side, together with three adults, another newborn, and a sizable young gray. Quickly, we must return to the marina, as our chief technician Michel Moisan needs to prepare for his departure for Alaska, where together with Robert Michaud he will lend a hand to a team of researchers studying the belugas of Cook Inlet.

Artsea is at the mouth of the Saguenay Fjord. She is swimming in the company of some thirty individuals. The herd is composed of adults and juveniles, including Blanchon, a female from the Saguenay community. At first the animals are in two distinct groups, but eventually the animals splinter off into pairs. With the animals scattered all around, collecting data is not so straightforward. After 3 hours with the herd, it begins to pour and we return to port. We haven’t spent much time in the field , but a lot of lab work lies ahead.

The clientele of Maison Simons adopted Twik (1990) and Artsea (2017). Shop the collection created for the adoption of Artsea.