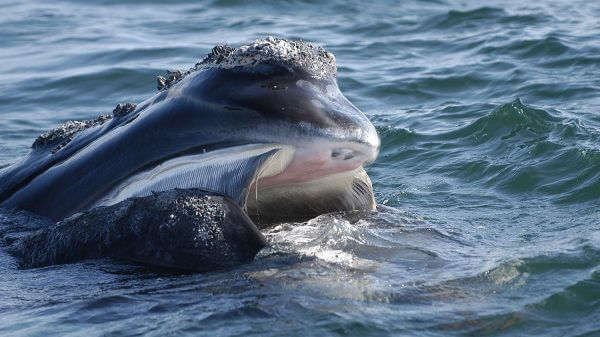 In recent months, the North Atlantic right whale has been much talked about. An unprecedented number of whales in Cape Cod Bay in recent weeks and an abnormally low number of newborns observed this winter off the coasts of Georgia and Florida are causing surprise and raising many questions among researchers and the public.

The global population of right whales is estimated at approximately 500 individuals. Since 1980, the species has been considered endangered by the Committee on the Status of Endangered Wildlife in Canada (COSEWIC). On April 14 in Cape Cod Bay, 217 right whales were observed during an aerial survey. That’s a record for the number of right whales ever observed in a single day! Researchers at the Center for Coastal Studies in Provincetown are brimming with excitement, as this is a golden opportunity to photo-ID the whales and analyze their health. Researchers are also trying to understand what leads the whales to congregate in such numbers. They suspect it is linked to an abundance of the zooplankton that right whales feed on. On April 14, the zooplankton concentration in the bay reaches up to 72,000 organisms per cubic metre of water, a level not seen in 32 years!

Is this unprecedented number of right whales in Cape Cod Bay a sign that the population is recovering? Unfortunately, no. Instead, researchers believe that the right whales’ situation is becoming more critical. The number of newborns observed this year in the right whales’ winter calving area off Georgia and Florida was the lowest in 17 years. Only four newborns were observed in aerial surveys, while the annual average is 17. A bad year does not necessarily mean reproductive issues for the population since the number of births can fluctuate considerably from one year to another, but researchers have observed below-average numbers of newborns every season since 2012. Since 2010, the calving rate has decreased by nearly 40%. Why? Researchers believe that incidental catches in fishing gear and longer migrations in search of food may be contributing factors.

In 2015, 83% of all right whales showed scarring or were dragging ropes, evidence that they had found themselves snared in fishing gear at one point or another. Bycatch is the leading cause of mortality in right whales. As for non-fatal entanglements, they can compromise reproduction and lead to a deterioration in the health of a whale long after the event itself.

According to some researchers, the decline in births might also be attributable to the longer migration of an increasing number of individuals from their winter calving area to Cape Cod Bay in the spring and then to the St. Lawrence in the summer. In the past five years, fewer right whales have been observed during the summer in the traditional feeding grounds between New England and Nova Scotia. Could there be a decrease in the abundance of food for right whales in these feeding areas? On the other hand, more and more right whales are being observed in summer in the St. Lawrence, notably off the coast of Percé, in the Magdalen Islands, in Chaleur Bay, in the Bas-Saint-Laurent, and in the St. Lawrence Estuary. Is the increasing number of observations proportional to an uptick in the number of right whales in the St. Lawrence River? And if whales are spending more energy moving around in search of food, are they left with less for breeding? Researchers from Fisheries and Oceans Canada, Dalhousie University and the US Oceanic and Atmospheric Observing Agency have been tracking right whales for the past five years and are trying to find answers to these questions.

A study published in recent weeks suggests one approach – which does not suit everyone! – to substantially reduce the risk of right whales getting caught in fishing gear in Canadian waters. You’ll find out more in our forthcoming article on right whales, which will be published next week on Whales Online!