My week at the whale warehouse 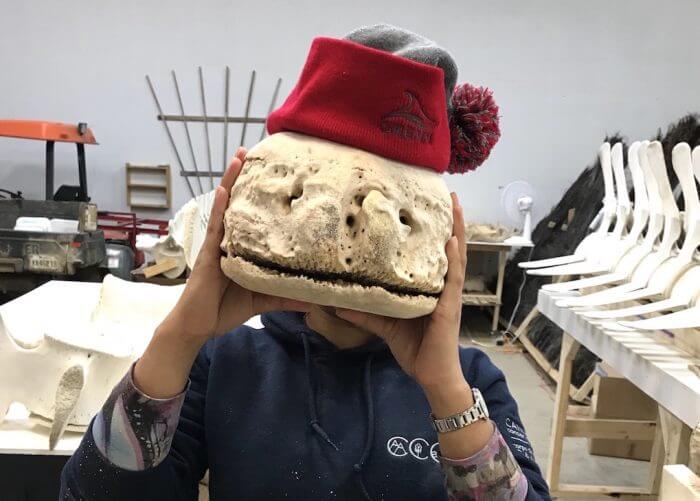 Caudal vertebrae of whales are among the smallest vertebrae. This fin whale caudal vertebra was still bigger than my face. © GREMM

It all started with Marie-Ève, my Editor-in-Chief, asking me, “Would you like to spend a week with skeletons, Jass?”

Next thing I knew, I was at GREMM’s skeleton facility, the whale warehouse located at Domaine des Ancêtres of Ferme 5 Étoiles in Sacré-Coeur. Michel Martin, GREMM’s senior naturalist and skeleton articulator, took me under his flipper and taught me more about whale bones than I could ever imagine in a once-in-a-lifetime opportunity.

From my four years of university in marine biology and time spent on the water as a naturalist, I knew that whales are giants and their bones differ from species to species. But it was not until I saw the bones of GREMM’s three specimens lying on wooden pallets that I realized just how massive the giants really are. There laid jawbones of a fin whale, a juvenile humpback whale and a North Atlantic right whale, and I felt like a speck of dust next to them.

I also met Patrick Bérubé—a jack-of-all-trades and skeleton articulator—who, along with Michel, has been working on the three whales for years now. Though, only recently have they undertaken this enormous project on a full-time basis.

Thrilled about the jawbones, I curiously stepped into the warehouse where there was a wall of tools on the left and hundreds of bones on the right. I took a deep breath—and surprisingly, simply a subtle smell of chemicals accompanied the porous, porcelain-like bones.

“The worst part is already over. The bugs and chemical treatments have cleaned up the bones,” Michel tells me.

There were intervertebral discs on one table, carefully arranged vertebrae on another, and piles of ribs on the walls. They belonged to three different whales that had stranded at different times over the years on the St. Lawrence shores. The oldest of the three being a 16-metres, 32-tonnes fin whale that stranded in September 2008. Next one was Piper, the North Atlantic right whale that washed ashore in 2015. She was 13.41 metres long and weighed 34.6 tonnes. GREMM was involved with the whole process of giving her a second life at their Center of Interpretation on Marine Mammals (CIMM) in Tadoussac. The youngest of the three was a juvenile humpback whale that washed up on the shores of Côte-Nord region near Godbout in May 2017. This individual was estimated to be between 10 to 14 months old.

Placed next to each other, Balaenidae (right whales) looked truly different than the Balaeinopteridae or rorquals (humpback whales, fin whales). As I made my way to the back, I felt dwarfed and humbled by Piper’s tall, black baleen. Made of keratin, these plates act as a filtering mechanism for mysticetes. They were 3-4 times the height of the baleen of the humpback whale. They were also longer, thinner and straighter in comparison and Piper used them to consume smaller prey than those of her rorqual warehouse-mates.

In addition, Piper’s bones were denser and heavier than the fin whale’s even though the fin whale was larger in size. In essence, seeing the bones helped me understand the whales’ different lifestyles. The fin whale’s lighter, more streamlined bones allowed it to travel at high speed: a perfect adaptation for the “greyhounds of the sea”.

The bones had undergone thorough multi-year treatments before their articulation process. They were put in troughs at Ferme 5 Étoiles—a long-time supporter of GREMM’s skeleton projects—after necropsies. During this stage, nature’s tiny scavengers cleaned the bones before they were placed into bins with weak solution of hydrogen peroxide to clean out the remaining organic matter. It also helped extract fatty oils out of the bones in order to prevent them from dripping oil later.

Michel took a quick daily temperature and humidity reading and it was time for us to put our gloves on to start rebuilding the whales. With chemicals working their magic, the organic “glue” attaching the discs to the vertebrae melts away. Our job was to put them back together. The relief of each disc sits perfectly against the recess of its respective vertebra.

We carefully arranged the humpback whale’s discs according to shape and size on a table and went through the piles of discs, one by one, with patience. “That’s a match!” we yelled in excitement every time.

A lot of work goes into getting the bones ready for display and aesthetics play a huge role in that. Using a steel-bristled brush and a scraper, we meticulously spot-cleaned each of the almost 50-pound rib bones of the right whale while bleach did the trick for whitening the spots.

We also used pressurized air to spew out any remaining dirt from the nooks and crannies of each jawbone and removed the algae that had claimed them during the dormant times. The only way to do it was something not everyone can say they have done: pressure-washing whale bones.

Piece-by-piece, we cleaned the skeletons to prepare them for their upcoming phase. Next spring, Michel and Patrick will work on the fin whale at the CIMM while its visitors get to see the process firsthand and ask questions about it from the two experts. By 2020, all three ocean giants will find their new habitat at the then expanded CIMM where they will continue educating and inspiring people who visit them for years to come. 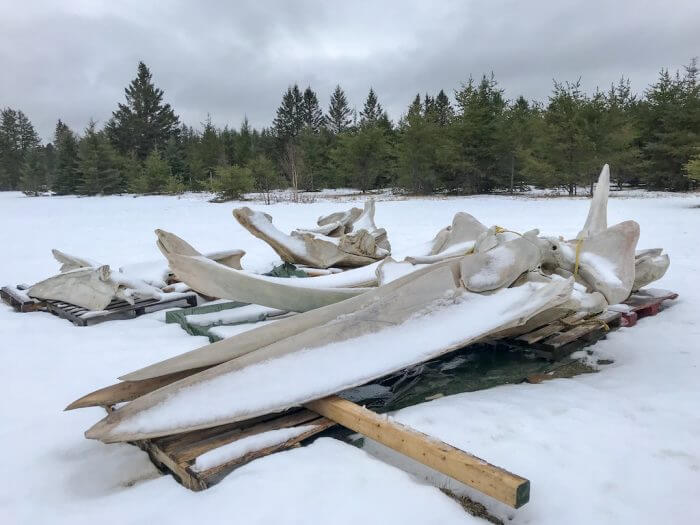 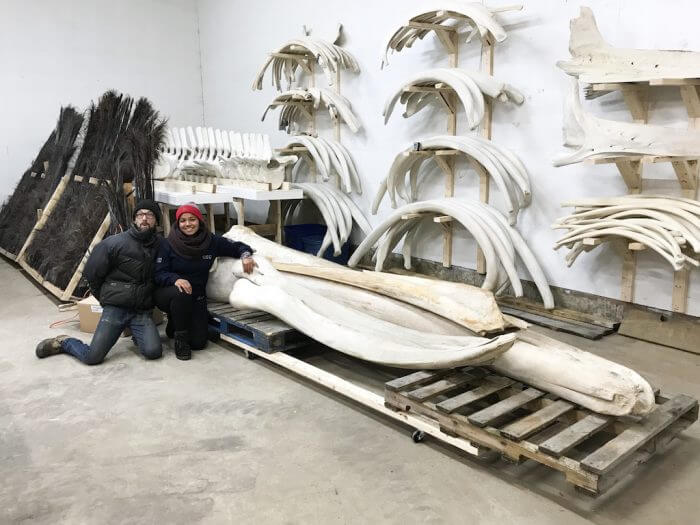 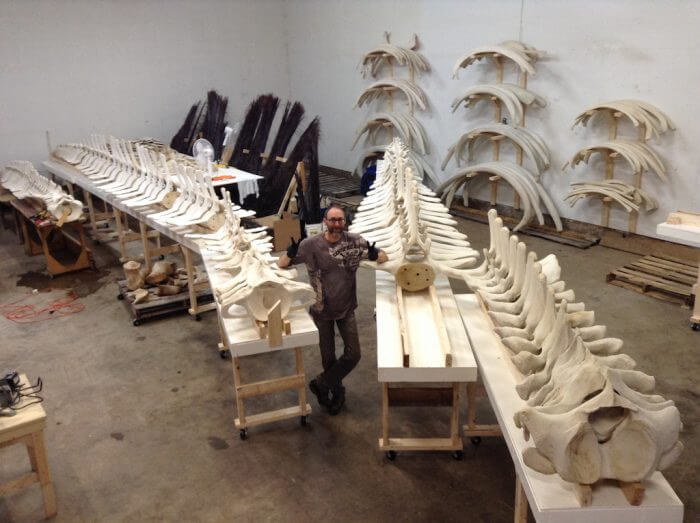 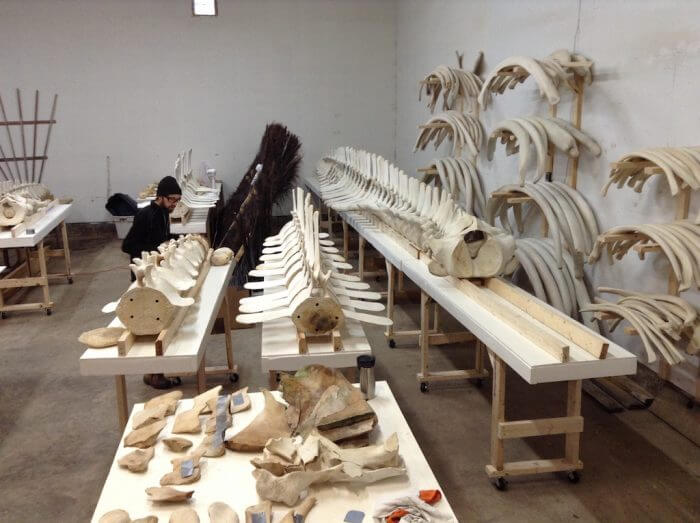 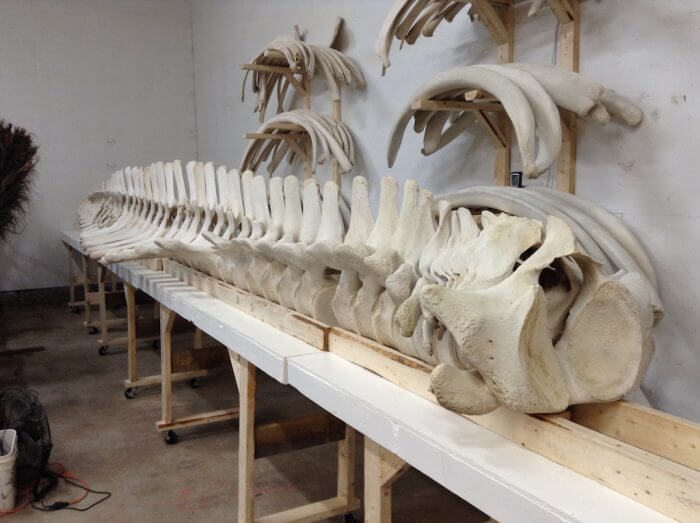 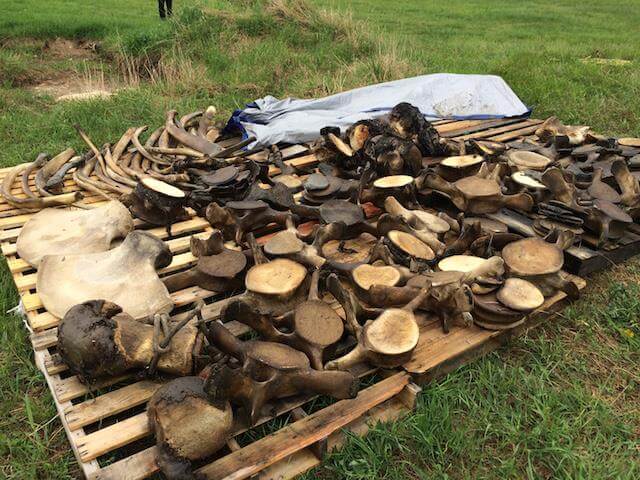 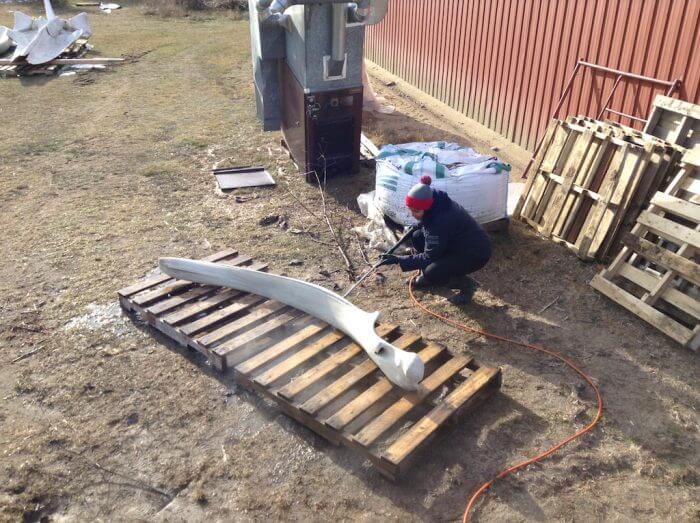 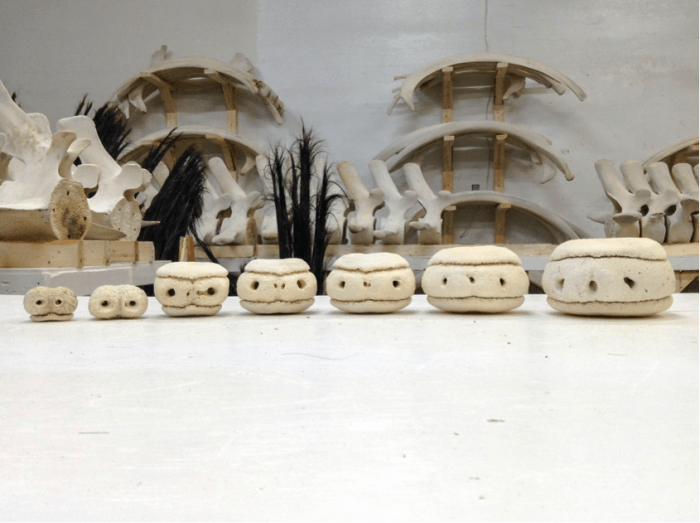