“My first whales of the season!” 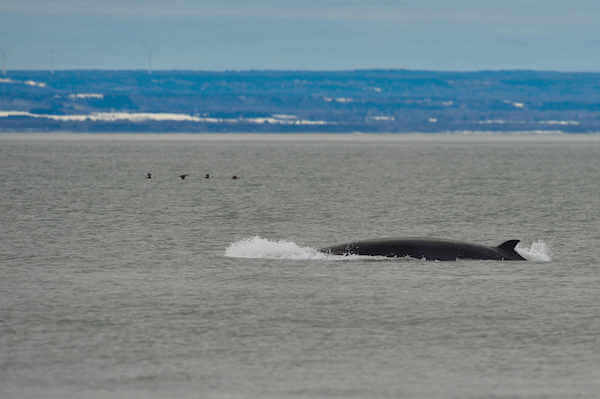 These same words were on the lips of a number of observers! Here they are, back in the St. Lawrence after spending the last few months in other parts of the world.

For some species, such as the fin whales observed this week in Gaspé Bay and the two minke whales seen off Les Bergeronnes and the mouth of the Saguenay, respectively, the journey was a long one and probably punctuated with periodic “snack breaks” since they left their wintering grounds in more temperate waters. It is generally there that they give birth. However, this model of “traditional” vertical migration between north and south is not as simple as it seems, reveals one study published in the Mammalian Review. Migratory species exhibit a wide array of migration patterns.

Harbour porpoises and dolphins usually migrate “horizontally”. In winter, they move offshore from coastal areas in order to avoid the ice. Belugas alternate from one favourable sector to another depending on the time of year. On April 8, about twenty belugas are seen in Tadoussac. Later that same day, a herd of adults and young was seen off Cap de Bon-Désir.

Within the same population, some individuals migrate and others do not. They may be non-breeding individuals such as juveniles, “non-competitive” males, or non-pregnant females that will not mate that year and are prolonging their feeding season. This winter, as we recall, blue whales and humpbacks were reported several times off the North Shore. Also, on April 9, two blue whales are spotted three kilometres off the coast of Godbout.

In Les Escoumins, one collaborator takes note of herds of harp seals. These seals are preparing to leave the Estuary and head north on a journey of several thousand kilometres. Several species of birds have also arrived in the Estuary: brant, Canada geese, common eiders, black scoter (Melanitta americana) – until recently considered conspecific with its European counterpart, the common scoter (Melanitta nigra) – double-crested cormorants and ring-billed gulls.

In mammals as well as birds, the timing of migration seems to be linked to the hormonal system, which is affected by the changes in climatic conditions (length of day, influx of fresh water, etc.) observed in spring and autumn. Other factors may also include the availability of food and the formation of ice.

In any case, the great migrants are back!