Leave it or learn 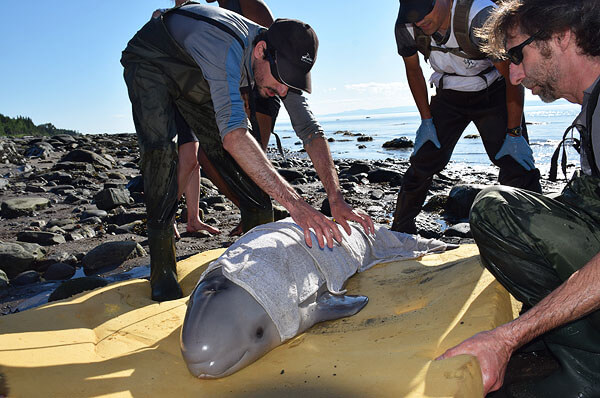 Last June 30, when a newborn beluga orphan was found on a beach in Rivière-du-Loup, a team from the Group for Research and Education on Marine Mammals (GREMM) transported the animal offshore in an attempt to reintegrate it into a group of females and find it a foster mother. Why did the experts decide to respond this way?

Leave it or Learn is the title of Alain Belhumeur’s short documentary about the first rescue attempts of a young beluga orphan. This documentary, seen by thousands of visitors to the Biodôme de Montréal, describes the philosophical tribulations and concerns of researchers regarding the plight of the population of St. Lawrence belugas. How should experts respond when a young beluga is found stranded alive? Can we save belugas one by one? What is the value of one individual in an endangered population? Must we always let nature take its course? The answers to these questions are not straightforward and opinions are divided. Over the years, as we learn more about the belugas of the St. Lawrence, the approach of researchers who closely monitor the evolution of this small endangered population has evolved and will continue to evolve.

The first case of a live beached beluga goes back to 1991. After receiving some initial care on the beach, the newborn orphan, discovered in the bay at Forestville the day after the tail of Hurricane Bob passed through the St. Lawrence, was transported to the Aquarium du Québec. The initial goal was to return the animal to its natural environment as soon as possible. The longer it remained at the Aquarium, the less plausible a reintroduction attempt would be. Unfortunately, the animal died at the Aquarium ten days later. A second live stranded beluga whale was found the following year and brought to the Biodôme de Montréal, where it died after four days. Between 1992 and 2007, three young belugas were found stranded alive, but their state of health was too poor for them to have a chance of survival.

In 2008, during a visit by Robert Michaud (scientific director for the GREMM) and Janie Giard (scientific coordinator of the Quebec Marine Mammal Emergency Response Network) to the Vancouver Aquarium, the birth of a beluga has helped researchers refine their approach. Kila, a female beluga and first-time mother, abandoned her young after calving. It was Kila’s mother, Aurora, who took care of the newborn. Adoption and spontaneous lactation, which has been observed on a few occasions in captivity, are possible.

A few months later, in 2008, Marine Mammal Emergencies receives a report of a beached newborn beluga in Saint-Siméon. Inspired by the adoption of the newborn observed at the Vancouver Aquarium, and after discussion with their colleagues from Fisheries and Oceans Canada and the Université de Montréal’s faculty of veterinary medicine, GREMM researchers, assisted by the Saguenay-St. Lawrence Marine Park team, attempted to save the newborn by releasing it back into the sea among a group of females and young. The newborn’s cries attracted other belugas. It was accepted by four beluga groups during the course of the day. In the fourth group, it was a female accompanied by a 3-4-year-old young that looked after it. As a mother, she lifted it gently with her pectoral fin and kept it in her field of view at all times. However, researchers quickly lost contact and still do not know, after six years, whether or not the intervention was successful, i.e. whether this or another female “adopted” the orphan.

Between 2008 and 2015, several live beached belugas were discovered, but all of them were in too poor a condition to attempt a relocation and died quickly.

On June 30, 2016, a female beluga just a few hours old was found on the beach near Rivière-du-Loup. After a cursory evaluation by video with Martin Haulena of the Vancouver Aquarium, GREMM researchers deemed that the animal was in good enough condition to attempt a relocation. In less than 6 hours, the newborn was transported aboard the GREMM research vessel Bleuvet and returned to the water among a group of females and young. In order for it to have a chance to survive, the newborn must be adopted and nursed by an adult female. If it is not adopted, it will quickly die. In fact, newborns are highly dependent on their mother’s care.

Biopsies were conducted on young belugas released back into the sea in 2008 and 2016. Using DNA extracted from these samples, researchers hope to have the chance to track them in the years to come and thus understand how their stories unfold.

Although the chances of success of such rescues are very low, for now, researchers are gambling that they are still worth attempting, given the critical state of the St. Lawrence beluga population. However, researchers would like to review the entire procedure and evaluate various options that would make it easier to assess the chances of success of these efforts. Various telemetric monitoring options are being considered, though the methods employed must be the least invasive possible to avoid endangering the survival of young animals. Other options should also be evaluated, such as a brief period of retention to better assess the animal’s state of health and administer care, or take more time to find a promising group for the release attempt. If they are deemed unfit to be released back into their environment, should we perform euthanasia to minimize their suffering or even consider transferring them to aquariums that already have belugas? All of these options are possible. With the recent uptick in cases of female mortality in the perinatal period, the question is becoming an important one. Not only might the number of cases rise, but the situation of belugas is becoming increasingly critical.

Researchers are planning a workshop with international experts within the next year to clarify these difficult choices.

Leave it or Learn (documentary by Alain Belhumeur)

Call of the Baby Beluga (documentary, The Nature of Things, CBC)

The Quebec Marine Mammal Emergency Response Network (Marine Mammal Emergencies; 1-877-7baleine), receives emergency calls and coordinates interventions whenever a marine mammal is found dead or in difficulty. Through its broad network of volunteers across the province, the Network dispatches a volunteer to the site as quickly as possible to take stock of the situation and ensure the animal’s safety and that of the public, pending the arrival of experts. Depending on the type of case, the Network notifies one of its specialized teams, which will be responsible for the intervention. For cases involving live stranded and stray belugas, GREMM acts as specialized team.