Large Rorquals and Ducks by the Thousands 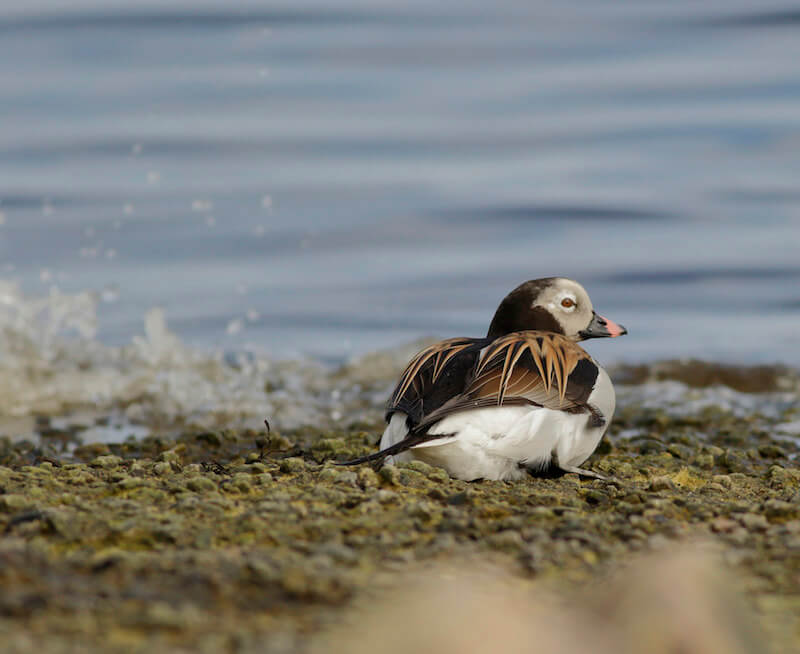 Thousands of long-tailed ducks line the waters of the Estuary. Skilled divers, they plunge to depths of up to sixty metres to gather mollusks and crustaceans. This time of year, males are in the process of acquiring their breeding plumage, which they’ll flaunt for the next two months. They have a brown head, neck and back, and grayish cheeks. In fall and winter, their head and neck turn white and a brown patch extends from the cheeks to the upper neck. In flight, the male’s long central tail feathers are conspicuous. In winter, the female has a white head with a dark spot on her cheek, while the rest of the body is dark. In summer, her colour pattern remains essentially the same, but darker. Males and females also have transitional plumages between summer and winter. These are the only ducks in the region to have such a wide variety of appearances throughout the year.

Not far from Prince Shoal Lighthouse, along a tide rip representing the boundary between the green waters of the St. Lawrence and the darker waters of the Saguenay, “little” birds (though the gannets seen among the long-tailed ducks, scoters, razorbills, gulls and kittiwakes are the largest seabirds in the North Atlantic) meet the “giants” of the sea: about ten minke whales and at least three fin whales have been noted here.

From Matane to Baie-Comeau via Pointe-des-Monts, René Roy, a long-time collaborator of the Mingan Island Cetacean Study (MICS) and Whales Online, together with a MICS researcher, resumes his explorations in the St. Lawrence. In his first “Field Notes” of the season, he details his encounters with two fin whales, a minke whale, three porpoises and four blue whales, all in a single day on May 6! One of the blue giants is identified near Matane: B093, a male that MICS has known for ages and seen many times in the Estuary. Moreover, last August, B093 was recognized in the Marine Park with Jawbreaker and B197.

Along the Charlevoix coast, belugas are seen. One observer spots them off Saint Irénée through the mist and numerous whitecaps. In Cap-à-l’Aigle, a resident splits his observation time between a solitary beluga and a raft of common eiders. These sea ducks nest on islands in the St. Lawrence, particularly those in the Upper Estuary. They line their nests with their down, which is the source of the famous eiderdown quilts!