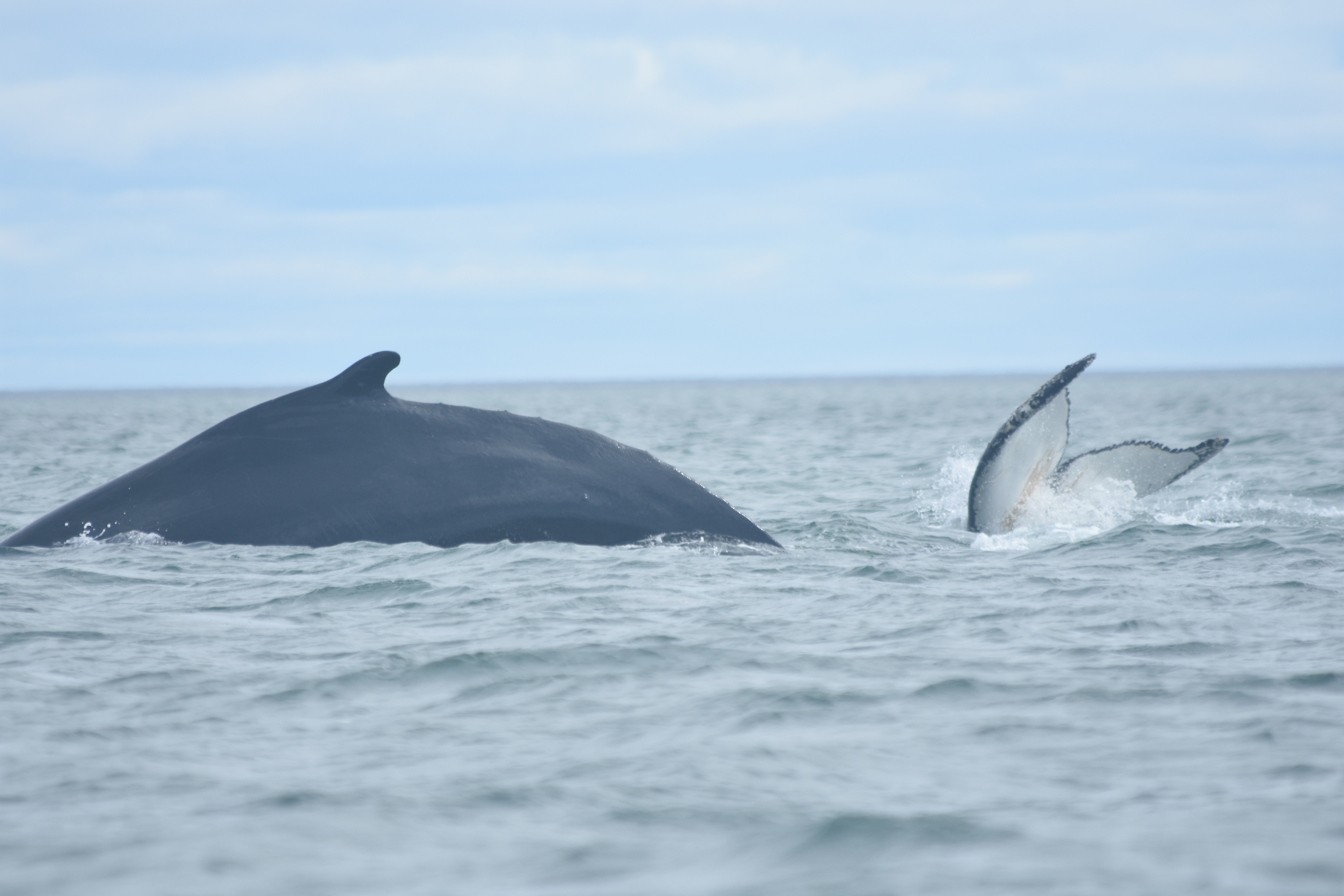 Porpoises, seals, sharks, small fish and seabirds… even when big blasts are conspicuous by their absence, the St. Lawrence remains a nugget of biodiversity. For several days now, the handful of humpbacks that were frequenting the Mingan Archipelago seem to have deserted the area. Only a solitary whale with an odd-looking, folded-over tail fluke was spotted by members of the Mingan Island Cetacean Study (MICS).

Despite this noteworthy absence, upon his return from a jaunt between various islands of the St. Lawrence, mariner Jacques Gélineau exclaims: “It’s alive out there!” In the course of his outing, he had the good fortune to encounter ten or so minke whales, including a female and her calf. He witnessed the attacks of porpoises and grey seals on a school of fish trying to flee these hungry predators. Additionally, he noted the presence of thousands of moon jellyfish, recognizable by the four horseshoe-shaped gonads visible in the centre of their umbrella. Lastly, he encountered a puffin, happy to return to its nest with a juicy fish dangling from its colourful bill. The Gulf is teeming with life for those who take the time to observe.

Off the coast of Sept-Îles, CERSI researchers also tally several minke whales and a few porpoises, but no large rorquals. Despite being slightly discouraged, they were nevertheless treated to an incredible visit by a porbeagle, which swam around their boat for several minutes. This small, bluish-grey shark – an endangered species – is one of seven types of sharks that frequent the St. Lawrence in summer, along with the basking shark.

In fact, on Monday, it was a basking shark that was turning heads as it foraged between Percé Rock and Bonaventure Island. Just like whales, this shark feeds by filtration, swimming through plankton with its mouth wide open. The next day, a North Atlantic right whale was detected a few kilometres away, near Île Plate. Even if the right whale is a mammal and the basking shark is a fish, this does not prevent them from sharing the same meal. It is therefore probably the influx of small prey such as copepods that triggered their presence. 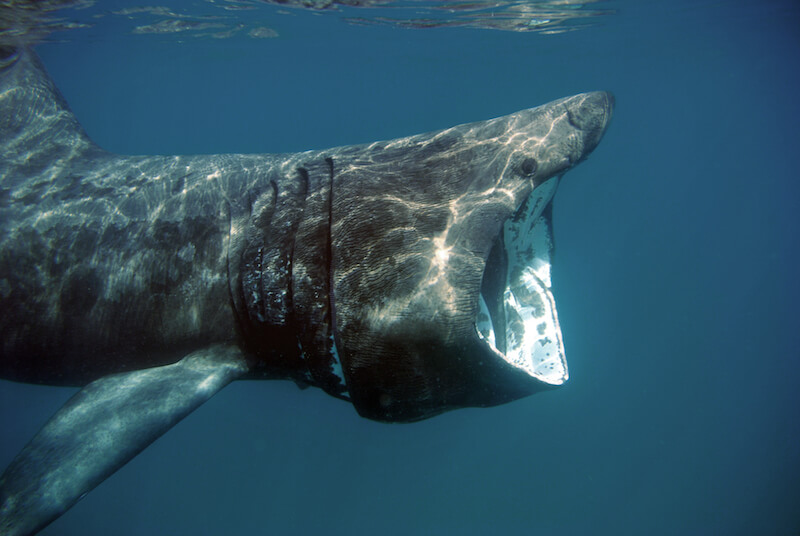 A few days ago, an employee of the Pointe-des-Monts lighthouse reported having observed dolphins. Unfortunately, the sighting was not sufficiently documented to determine whether they were white-beaked dolphins or Atlantic white-sided dolphins. Both these species live in the cold-temperate waters of the North Atlantic and are frequently seen in the St. Lawrence. Their body shape, colouring, and dynamic, bouncy swimming style are quite similar. However, they could also have been common or striped dolphins, which are rarer in cold water but are spotted in the St. Lawrence on occasion.

As for belugas, it’s been quieter this past week. Observers based in Saint-Irénée, Rivière-du-Loup, Cacouna and Les Escoumins have been reporting solitary individuals or small, scattered pods. Capelin may be less plentiful, or perhaps these white whales have simply been more difficult to spot due to the blustery winds and strong waves.

A forest of geysers

Resting on a beach in Gaspé Bay, an observer admits that she has not had the chance to cross paths with a single whale this week. She consoles herself with the hypnotic vision of northern gannets dive-bombing a school of fish. However, large rorquals are not far away. Off the coast of Cape Gaspé, several scattered humpback and fin whales have been reported amongst the schools of sand lance, which come and go with the tides.

On Tuesday, MICS collaborator René Roy sets sail along the northern shore of the Gaspé Peninsula. Six nautical miles off Pointe à la Frégate, he happens upon a group of more than fifty  whales.” About thirty fins, twenty humpbacks and many minke whales,” he estimates. “I was in the heart of a veritable forest of geysers.” The veteran seafarer he is, he spots a few old acquaintances like Paloma and Cédille, the latter accompanied by a calf.

“When there is food somewhere, word gets around. Whales attract more whales!” exclaims René Roy.

In the heart of the Saguenay-St. Lawrence Marine Park, whale-watching cruises are in full swing, thanks to the arrival of a number of familiar dorsal fins in the Estuary. With regard to fin whales, GREMM’s research assistants were able to identify Zipper, Ti-Croche, Piton and Bp935 this week. We also recognized a few humpbacks, including Chewbacca, H858 (locally known as “Queen”), H859 and H909 (sometimes nicknamed “Seventeen”). We’ve lost count of the minke whales, and we witnessed the arrival of the season’s first stealthy, black-backed porpoises. 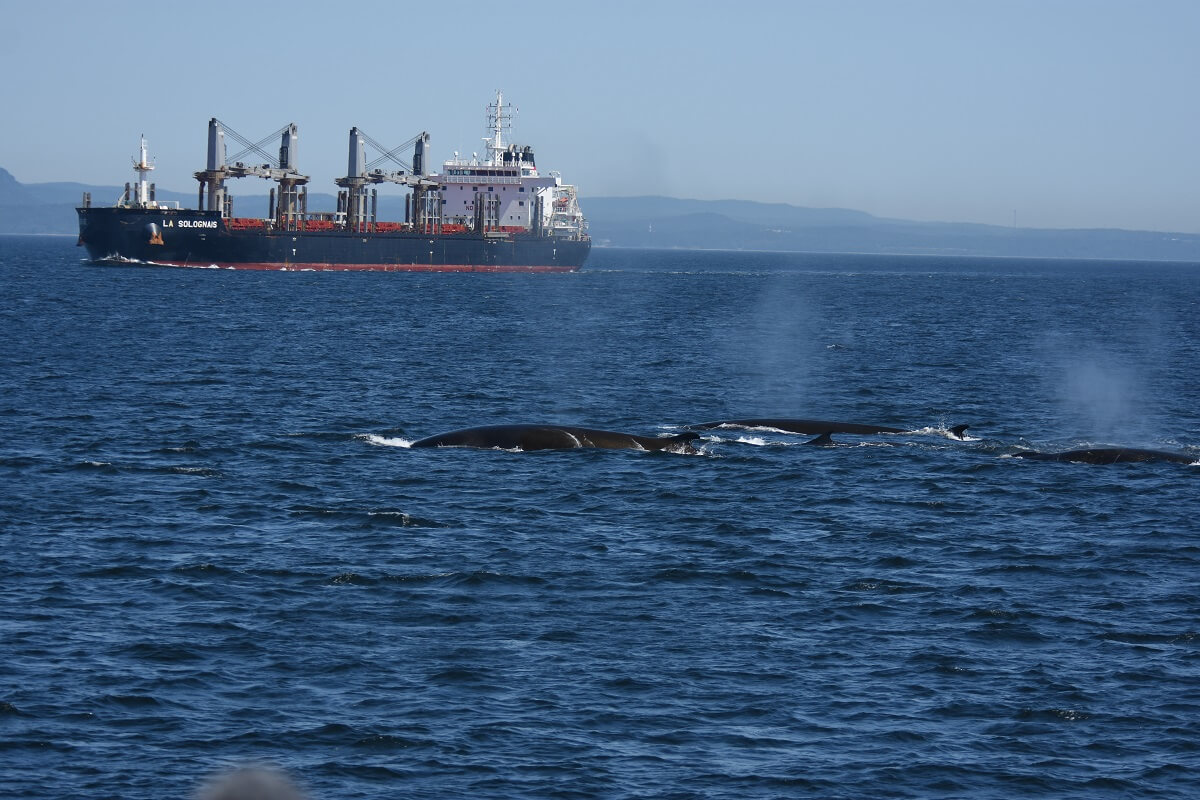 On July 5, off Tadoussac and Les Bergeronnes, photographer Renaud Pintiaux is spellbound: as the sun beams down on the waves and the wind lashes at the frothy sea, he spots a herd of a hundred or so foraging grey seals. As the tide rises, these impressive pinnipeds plunge into the heart of a school of capelin, sharing their feast with a myriad of gulls, numerous minke whales and nearly a dozen fin whales. “Wind, waves, sun, action and lots of fun!” sums up the observer. 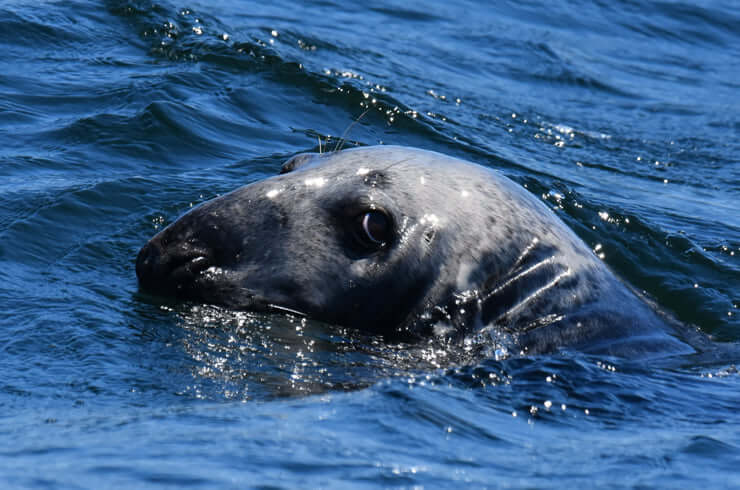 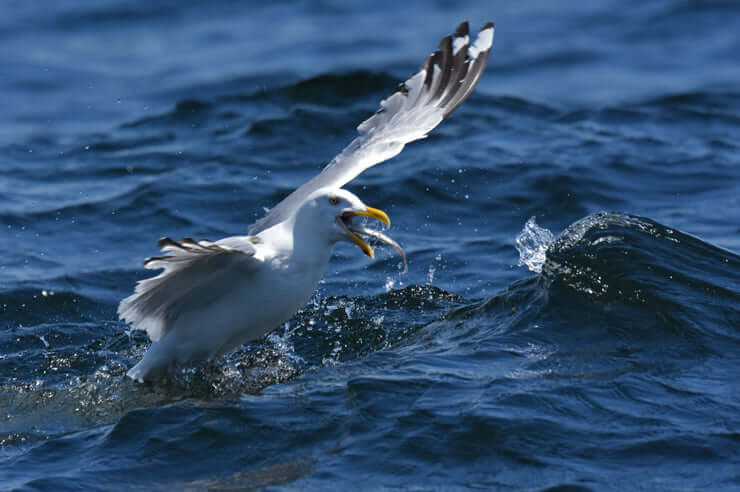