In Groups or Alone? 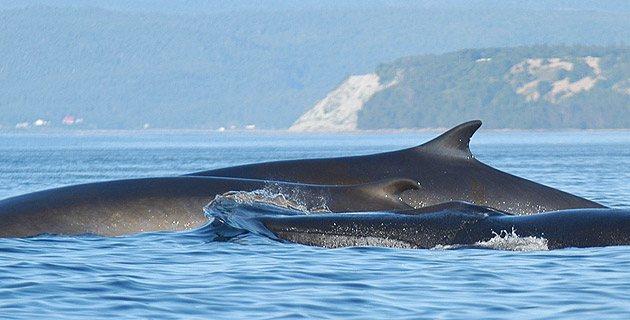 The global fin whale population is believed to be recovering, according to the International Union for the Conservation of Nature (IUCN). However, the population visiting the St. Lawrence may not be out of the woods just yet. © GREMM

“Harbour porpoises are everywhere, every day,” reports a collaborator from Franquelin. These cetaceans, which measure 1 to 2 m long, are nearly impossible to count, as they are numerous and scattered. The same is true for these “mereswine” in Sept-Îles. In the Marine Park area, the “usual” groups of 5 to 10 porpoises have given way to larger herds numbering hundreds of individuals. Rather wary, porpoises show little curiosity toward boats and rarely leap out of the water, unlike the dolphins with which they are often confused.

Near Gaspé, hundreds of white-sided dolphins are spotted. Swimming in compact formations, they leap repeatedly over the waves in the boat’s wake. Minke whales occasionally show this behaviour. Off the coast of Gros Cap à l’Aigle, a St. Lawrence captain watches a minke whale swimming in the wake of her ship for about ten minutes.

On August 29, whale-watchers in the Gaspé Peninsula discovered a multitude of white-sided dolphins off Cap-des-Rosiers. Dolphins hunt small fish near the water surface. When feeding, they often associate with fin and humpback whales. The same day, there are also 5 humpback whales, 5 fin whales, 25 minke whales, a North Atlantic right whale, bluefin tuna and about ten harbour porpoises.

Abundant prey concentrated in a particular location attract large numbers of rorquals, which are otherwise rather solitary by nature. The blue whale, for example, is a relative loner and nomadic. It moves in pairs or small, short-lived groups. On August 26, off Pointe-des-Monts, our collaborator René Roy and Mingan Island Cetacean Study (MICS) researcher David Gaspard identified a total of six blue whales. The giants are gorging themselves on krill. The crew identified Phoenix and B212 among the group.

Fin whales are observed alone, in pairs, or in groups of 3 to 20 individuals. The presence of food and tidal cycles influence their behaviour and distribution. In the Mingan region, the MICS team tallies 17 fin whales in a single day on August 27, not to mention 15 humpbacks, a blue whale and a number of minke whales.

The humpback whale is the most social of all rorquals. In summer, gatherings usually occur where food is plentiful. For the past few weeks, the same two humpbacks have been frequenting the Bay of Sept-Îles. Four other individuals are also found in the region, including the male H755 and the female Tic Tac Toe and her calf. In fact, among rorquals, humpbacks show the longest-lasting bond between mother and calf: over one year. In the Estuary, the female Tingley and her newborn are recognized by several captains in the Marine Park on August 29 and 30 and by René Roy on August 22 while sailing off Colombier. The same day, this “horizon scanner” also identifies the blue whale Crinckle and the humpback H725.

Several species of toothed whales form complex societies in which tight bonds exist between individuals. This is the case for belugas, which live in groups that vary in age and sex. But sometimes animals find themselves alone, hundreds of kilometres from home.

This was the case for a beluga seen solo this week near Port-Cartier. Almost at the same time, the GREMM team was also advised of the presence of a young beluga in Pleasant Bay, Nova Scotia – the same area where another beluga had been reported two years earlier. In the cases of both Port-Cartier and Pleasant Bay, the animals are not sociable and keep their distance. The situation is not problematic for now, but is being closely monitored. Belugas that find themselves outside their normal range sometimes develop social behaviour toward boats, which becomes a cause for major concern in terms of the risk of collision.

Where did this beluga in Pleasant Bay come from? To find out, researchers resort to biopsies or photo-identification. The animal shows a conspicuous marking on its body, but it was not recognized amongst the individuals featured in the St. Lawrence beluga catalogue. In the past, belugas seen in the US and the Maritimes were mostly from the St. Lawrence population. In 2015, one of the three stray belugas observed in Narragansett Bay, Rhode Island was identified as an individual from the St. Lawrence. Speaking of St. Lawrence belugas, herds have been streaming by in the mouth of the Saguenay this week, much to the delight of observers posted on the rocks in front of the Marine Mammal Interpretation Centre in Tadoussac.

Not a herd, but a school of some 50 Atlantic bluefin tuna is seen on August 21 off Cap-des-Rosiers. These enormous fish can form schools of hundreds or even thousands of individuals. Lightning fast, they hunt sand lance, herring and mackerel. Great predators, they become in turn the target of fishermen. The Atlantic bluefin tuna is endangered and its main threat remains fishing. The St. Lawrence is its feeding grounds; in winter it returns to breed in the Gulf of Mexico.