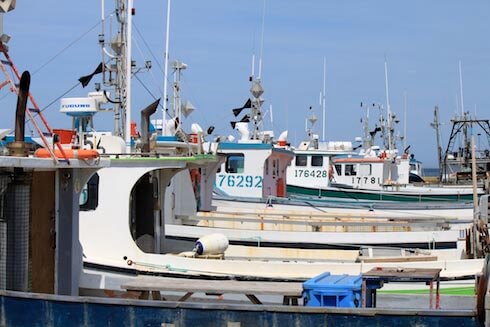 “The view is endless!” reports one observer in the Gaspé region, already getting the whale-watching boats ready for the upcoming season. The St. Lawrence River is ice-free, but no whale spouts have been reported. Instead, fishing boats are the ones turning heads; offshore they abound, as the commercial fishing season is in full swing in the Estuary and Gulf of St. Lawrence. As early as March 23, Rimouski and Matane residents were among the first to be able to enjoy the taste of fresh crab recently landed on the quays of Zone 17. This year, fishing began earlier than usual due to the lack of ice. At about the same time, snow crabbing was getting under way in Zone 12 A, from Mont-Louis to Cap-Gaspé. In the week to come, the Sept-Îles region will join those areas open for fishing.

And, beginning tomorrow, Friday, April 1, the Gulf of St. Lawrence will be open to shrimpers. This is a time of year when traffic in the Gulf is impressive. In Quebec northern shrimp are caught by trawling and, like lobster, is also one of the David Suzuki Foundation’s “Top 10 sustainable seafood picks“. It is also eco-certified by the Marine Stewardship Council (MSC). Scallops are another species harvested commercially this time of year; fishermen from the Magdalen Islands have been after them for several weeks now, while those in the Côte-Nord region will soon have their chance to do the same. Then, Magdalen Islanders will theoretically set out to sea on April 30 to kick off their lobster season.

Harp seal hunting is said to be a “wash-out” for the Îles-de-la-Madeleine sector. According to Fisheries and Oceans Canada, the vast majority of seals have avoided the region, notably due to the lack of ice. A few hunters ventured out to sea during the week preceding Easter and came back with about 200 seals, while the quota is 15,000 animals. Magdalen Island hunters are slowly turning to gray seals, the marketing of which has been authorized for four years. If Islander hunters are worried about seeing the ice cover disappear, the situation is completely different in the Newfoundland region. A team from Fisheries and Oceans Canada found good ice conditions when flying over southeastern Labrador and northern Newfoundland. This is where most of the harp seals are being observed.

In this regard, since March 17 and until April 23, the photo exhibition Hakapik is being presented in Montréal. The exhibit includes thirty or so black-and-white photos obtained from news reports of seal hunters dating between 2012 and 2015 in the Magdalen Islands, off the coasts of Newfoundland, and Nunavut. The Magdalen photographer and hunter explains that his project aims both to document and reflect on the very nature of this traditional activity rooted in the history of maritime communities and northern Canada in particular.