Gaspésie Invaded by “Jubartes” or “Megaptera” 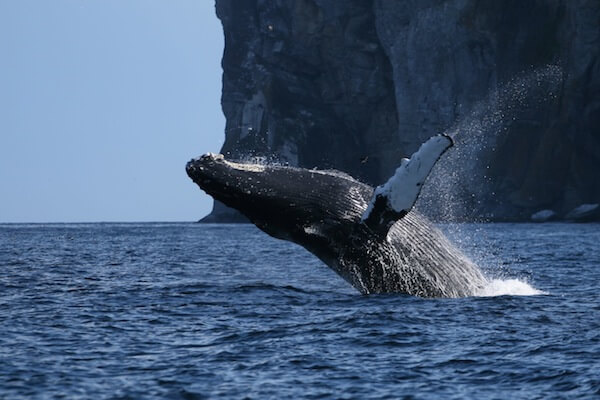 No doubt about it, everyone who has been plying the offshore waters of the Gaspé region lately has one word on the tip of their tongue: humpbacks! Their appearances are described as follows: a balloon-shaped spout erupts at the surface and a tail glistens in the sun on the horizon; a dorsal fin on a dark hunched back emerges from the water surface and a long pectoral fin is lifted into the air. The French nicknames “jubarte” and “megaptera” stem precisely from these two physical particularities: the name “jubarte” is of Latin origin and means “hump” – the dorsal fin usually shows a hump at its base, whereas the Greek term “megaptera” translates as “large winged” – a reference to the extremely long white pectoral fins that measure one third of the body length of these whales.

On June 9 in Gaspé Bay, René Roy crosses paths with the faithful BBR (Boom Boom River), also well known in the Estuary by the name Gaspar. She is in the company of a young humpback that has yet to be identified. And, all week long, offshore observers have been encountering other humpbacks, not to mention fin whales, blue whales, minke whales and harbour porpoises. On June 15 in Percé, six humpbacks are feeding just off Bonaventure Island and its famous gannet colony. Late in the afternoon that same day, whale cruise operators cross paths with seven individuals on their last outing of the day! According to the guide-interpreter on board, these whales were gorging themselves on schools of capelin. Gannets are all taking advantage of this feast, as are minke whales. At the other end of the Gulf, in Sept-Îles, minke whales are observed as they share their meal with humpbacks.

In the Estuary, a scan of the horizon yields a different result: it’s quieter, at least for now. In Franquelin, our collaborator observes just three minke whales and four harbour porpoises. This lull shouldn’t last long, however; if historical use of this sector – especially by minke whales and large rorquals – is anything to go by, there should be more action here in the next few weeks. On June 19, between Les Escoumins and Tadoussac, one naturalist exclaims: “Hallelujah, they’re here.” She’s just returned from a trip offshore where minke whales abound all around the boat, most of them surface feeding! The day before, the area was practically devoid of life and the thick fog only made it that much more difficult for captains and naturalists to locate animals in this “pea soup”. It all goes to show that no two days on the water are the same!