From the St. Lawrence Estuary to the north Atlantic: the odyssey of the blue whale Symphony 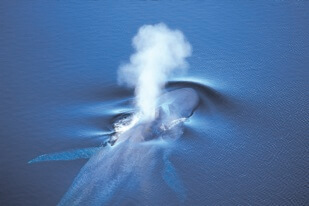 For more than five months, researchers have been tracking the migration of this female thanks to a signal emitted by an Argos transmitter attached to her back. This record-long monitoring has provided the first data that can be used to identify the wintering grounds of those blue whales that frequent the St. Lawrence in the summer. Since 2010, in an effort to protect this endangered population, telemetric monitoring has been carried out on 18 different individuals to map out the species’ essential habitat.

The Argos transmitter was placed on the back of the female blue whale B244 (“Symphony”) on November 4, 2014 by a Fisheries and Oceans Canada team; the animal was in the St. Lawrence Estuary, off the coast of Forestville. Scientist Véronique Lesage of the Maurice Lamontagne Institute is piloting this project, which is being carried out in collaboration with Richard Sears of the Mingan Island Cetacean Study (MICS) and researcher Russ Andrews of the Alaska SeaLife Center.

“We purposely wait until later in the fall to begin tagging in order to identify the autumn and winter ranges frequented by blue whales, as we don’t know anything in this respect, explains Véronique Lesage for Whales Online. Given that the Canadian government is obligated to protect critical blue whale habitat under the Species at Risk Act, we felt compelled to conduct research in this regard at Fisheries and Oceans Canada.”

Although a number of blue whales have been tracked quite late into the fall beyond the northwestern part of the Gulf and the Estuary, for more than five months Symphony has been providing the very first data concerning areas frequented by blue whales in the winter in the Northwest Atlantic. Two weeks after being fitted with the transmitter, she left the St. Lawrence and headed toward the Atlantic. Her journey can be seen mapped out and described in detail on the MICS website . She travelled to US continental waters, off the coast of the Carolinas, where she spent several weeks. After travelling up to the entrance of the Cabot Strait when it was congested with ice, she turned south again and is currently in the deep (5000 m) Atlantic waters, somewhere between Bermuda and Nova Scotia.

Last summer, like a number of other members of her species, Symphony spent time in the rich waters of the St. Lawrence to feed and stock up on her energy reserves. Migrating south in the fall allows her to reach more temperate waters, most likely to reproduce.

18 tagged whales at the heart of a project

This satellite monitoring is part of a vast project initiated in 2010, and will officially end when Symphony’s transmitter stops working. The respective teams of Véronique Lesage and Richard Sears tagged 18 blue whales. Considering how difficult it is to keep these tags attached for extended periods, deployments have generally been of short duration, ranging from a few to 70 days, with an average of three to four weeks. Symphony, who has had hers for over five months, has set a new record in this regard.

The objective of this project is to boost local research efforts being made by MICS, Fisheries and Oceans Canada (DFO) and the Group for Research and Education on Marine Mammals (GREMM) to identify areas used by blue whales beyond the coastal zones of the Estuary and the northwestern portion of the Gulf. “The tags allowed us to determine the areas used in the Estuary and in the Gaspé region, which confirms certain historical data, but also identifies areas farther offshore that had not previously been recorded, continues Véronique Lesage. The trackings also allowed us to establish the average amount of time the whales spend in different regions and to better understand their movement patterns between regions. We have also been able to identify new use areas along the Scotian Shelf, the Cabot Strait and in southern Newfoundland, including the Grand Banks.”

Transmitter: how it works

The Argos transmitter measures 5 cm and is filled with electronic components coated in an epoxy resin. It is watertight and is able to withstand water pressure when the animal dives into the deep. It is mounted onto an arrow which is shot using an air rifle from the deck of a boat. The arrow’s two titanium bolts are intended to lodge themselves in the cartilage of the blue whale’s dorsal fin. But good marksmanship is essential here, as the fin is quite small (15 to 20 cm) in this whale which measures on average some 30 metres. The bolts are short enough that they will only embed themselves in the whale’s blubber, and not in its muscle. Fitted with an antenna, it transmits a location signal from the animal to satellites of the Argos system which send the information back to land-based data processing centres to which Ms. Lesage has access.

For the long term

Véronique Lesage hopes to continue the tracking program: “Tracking Symphony constitutes a tremendous advance in our knowledge of blue whale migration, but it only concerns a single individual. Increasing the sample size would perhaps paint quite a different picture of the wintering grounds, but one thing that is clear is that Symphony has shown us how small the Northwest Atlantic really is for these great beasts. They can cover hundreds of kilometres in very little time. The data collected are therefore extremely telling, but it is clear that sustained efforts will be needed to increase monitoring of animals that can be tracked as far as their wintering grounds. Thus, although the project has ended, the DFO will continue its efforts in coming years by tagging additional animals in the fall when the weather allows.”

In this regard, Véronique Lesage is in the process of finalizing a paper that will be published in the journal Marine Mammal Science. She will present the results at the 21st Biennial Conference on the Biology of Marine Mammals which will be held in December 2015 in San Francisco.