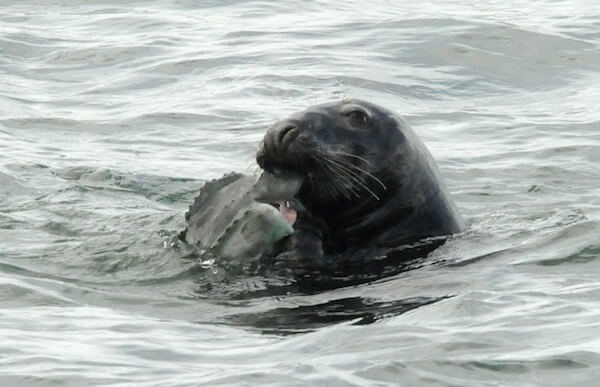 Gray seal with a lumpfish in its mouth © Renaud Pintiaux

Harp seals by the hundreds on the ice at Sainte-Flavie and Pointe-au-Père, groups of harp seals off Les Escoumins, gray seals in the ice breaks in Franquelin and a harbour seal on the rocks at Tadoussac‘s Pointe de l’Islet; what are all these seals doing in the Estuary in the middle of winter? Harbour seals live here year-round while the other two species are visitors that come mainly to feed.

Like whales, seals are skilled underwater hunters. Their hind legs are used to get a “foothold” on the water, propelling them with great power, while their front legs help to stabilize them and make pinpoint turns. Like whales, seals have a number adaptations to remain underwater for long periods, reaching depths of up to 400 metres in the case of gray seals and harp seals. Harbour seals, on the other hand, dive in shallower water, i.e. around 30-40 metres deep.

What do they hunt? Their menu consists of crustaceans and fish such as capelin, herring and sand lances, as well as cod, plaice and halibut. Depending on the abundance of prey, they hunt alone or in groups. When small enough, prey are swallowed underwater, but larger ones are brought back to the surface where they are consumed in pieces. Some of the world’s seal species, such as the leopard seal, even attack other species of pinnipeds, small cetaceans such as porpoises, and birds. Unusual observation: on January 12, a News from Afield collaborator discovers a gull feeding on a drifting seal carcass near the wharf in Tadoussac.

Far from the St. Lawrence, on Argentina’s Valdes Peninsula, kelp gulls also attack marine mammals, but these are large and living prey: southern right whales! The birds feed on bits of skin measuring several centimetres from the backs of these whales. St. Lawrence whales do not face this threat, as the gulls here do not exhibit such behaviour.

Speaking of whales, over 150 belugas were spotted on January 17 off Cap de Bon-Désir. Further details to come in the Field Notes of our collaborator who reported the observation!