First Whales Observed in the Estuary 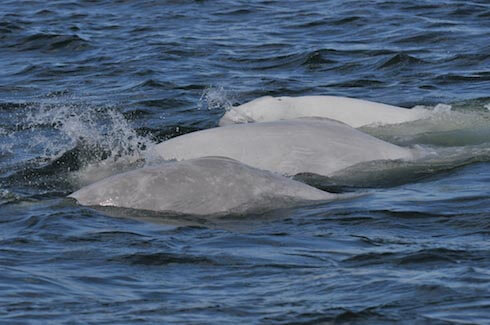 It was with contagious enthusiasm that a boat captain from Les Escoumins phoned the Whales Online team: “I could have written, but I was only too happy to report this observation verbally! I’m currently watching four belugas near our boat!” This observation is the first for whales in the Estuary since the beginning of 2016. Belugas are year-round residents of St. Lawrence, so it wasn’t a complete surprise, but it is nevertheless an observation that provides a glimpse of the imminent return of whales to the Estuary.

One detail mentioned by this observer was the colour of the skin of one of the individuals within the group: dark gray, almost blue. This is what is referred to as a “bleuvet” in French. Indeed, specific terms apply to belugas at certain stages of development which are characterized by changes in colouration. The “calf” or “newborn” has brown skin. The beluga calving season runs from June to September. When animals are one year old, their skin turns bluish-gray; they are then called “bleuvets“. Older juveniles (from approximately 2 years until adulthood) are called “grays”. The skin of juveniles gradually changes from gray to white in adulthood. This change usually occurs between 8 and 14 years for females and between 16 and 18 years for males.

Where do belugas spend the winter?

The group of belugas was swimming in circles, moving around without any apparent direction. Were they returning from a sector farther downstream? Might they have been heading toward the Saguenay Fjord? As a matter of fact, icebreaking in this sector by the icebreaker Amundsen was initiated on 14 March. This helps prevent ice jams and flooding that can occur during the spring thaw. The Pierre Radisson also participated in this annual event.

Over the past thirty years, knowledge of the distribution and summer habitat of belugas has grown; in summer, the beluga population of the St. Lawrence is concentrated in the Estuary and the Saguenay Fjord. What happens once they leave this sector in late fall? Where do they congregate? What are the driving factors for their choice for a particular sector to spend the cold season and what is that area? These questions remain, even after more than 30 years of research on St. Lawrence belugas. In October 2015, a new project was launched, Belugas on the Move, which sought to understand where and how belugas live with the onset of winter. Unfortunately, the project was not as conclusive as researchers had hoped. The satellite tags placed on six male belugas stopped transmitting after about ten days. The question therefore remains, as does our researchers’ motivation to find the answer!