At the time of his most recent interview with a Whales Online intern in the fall of 2018, Michel Martin, senior naturalist at the Group for Research and Education on Marine Mammals (GREMM), was cleaning whale bones and just beginning to piece together their bodies with the help of his skeleton assembly colleague Patrick Bérubé. Their goal: to prepare three new skeletons for Tadoussac’s Marine Mammal Interpretation Centre (CIMM), which will be added to what is already the largest collection of mounted whale skeletons in Canada! Since then, the two specialists have nearly completed their tedious task, and a new intern is interviewing them. I met with Michel to clarify the tasks that await them between now and the opening of the exhibit in spring and to reflect back on this great adventure that has lasted over two years.

Located at the “Domaine des Ancêtres” of the “5 Étoiles” farm in Sacré-Cœur, the enormous garage once provided a storage place for tons of potatoes and, more recently, snowmobiles. Currently, it is filled with a well-organized but difficult-to-navigate collection of vertebrae, rib cages, skulls and various other whale bones. These bones will be prepared and packaged for safe transportation to CIMM, where the two individuals will undertake the official assembly. Certain parts, such as the pectoral fins or hind section of the tail of the fin whale, were pre-assembled in the workshop and already give us an idea how much space these enormous bodies will take up in the museum.

Calm yet excited, Michel and Patrick are now tackling the steel reinforcements developed with the collaboration of engineers to ensure that the skeletons hold securely in place, even in the event of an earthquake. These final preparations mark the end of the days in the warehouse, since the remainder of the work will be carried out at CIMM. Although they might be a bit nostalgic to leave this space specially tailored to the needs of their project, they’ll hardly miss the temperature fluctuations or the stench of decay.

Michel smiles as he remembers the initial state of their messy “pile of bones”. The latter had to be moved and organized, an arduous task that required the two gents to be physically fit. Imagine: 14 whale ribs weighing 15 to 25 kilos each, lifted one by one across the floor of the warehouse. A real marathon! This heavy lifting was coordinated with painstaking organization, analysis and reflection, all of which were equally important. 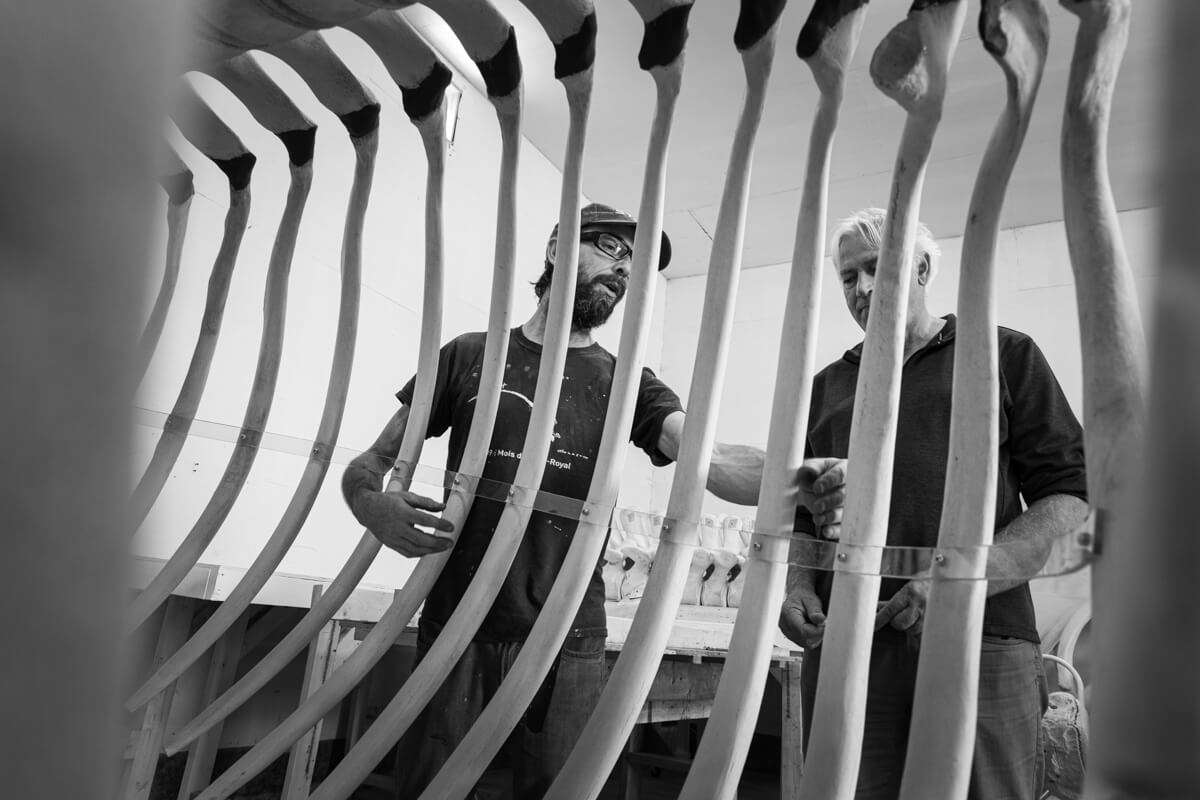 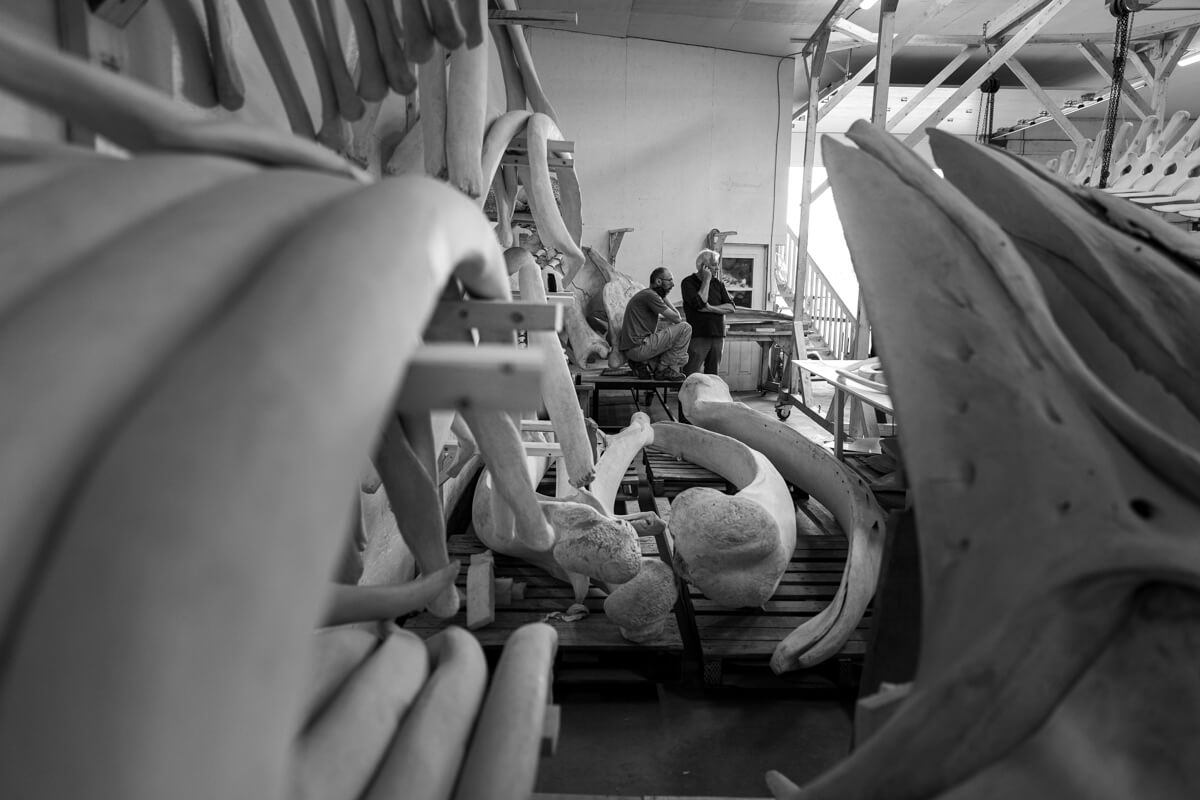 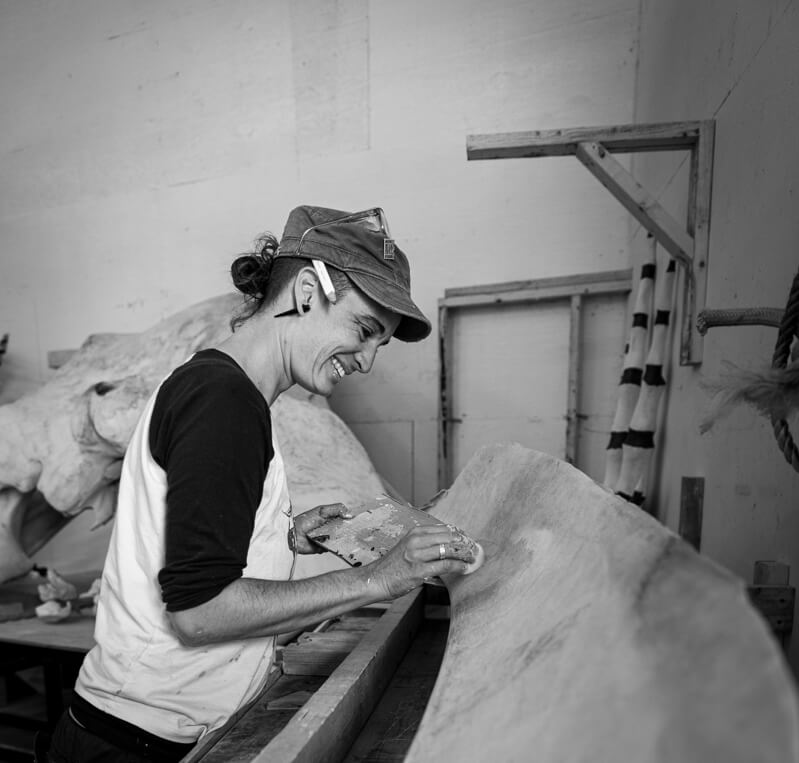 In his many years at GREMM, Michel has had the opportunity to observe hundreds of whales and has already assembled the skeletons of small marine mammals, but this major project represents a milestone achievement in his career. I ask him whether his perception of cetaceans has changed since he has had the opportunity to handle their skeletons. “For sure, it’s quite special to see the entire anatomy of a whale. It really allows us to appreciate the particularities of each individual.” Thus, on the skeleton of the well known North Atlantic right whale Piper, there is decalcification, which may have been caused by a ship strike, and on the skull of the humpback, a delamination that suggests an infection. “Piecing together the skeleton of a marine mammal means piecing together its history,” explains Michel.

We already know what the display of the three giants will look like: the North Atlantic right whale will be on the ground, under the fin whale, which will be suspended, while the humpback will hang between the two vertically, in a feeding position. However, before undertaking the final assembly, we will have to wait until the work is completed at CIMM and for the engineers to issue their authorizations. Visitors will have the chance to see and touch the skeletons this coming spring.

Despite their eagerness to complete this project, Michel and Patrick are also sad to see it come to an end, given their attachment to these skeletons that they have gotten to know over the past two plus years, and which they have been able to bring back to life through their hard work, their ambition and their stories.

Special thanks to Sylvain Fortier and Sandrine D’Anjou Dumas, who also helped reconstruct the three skeletons. 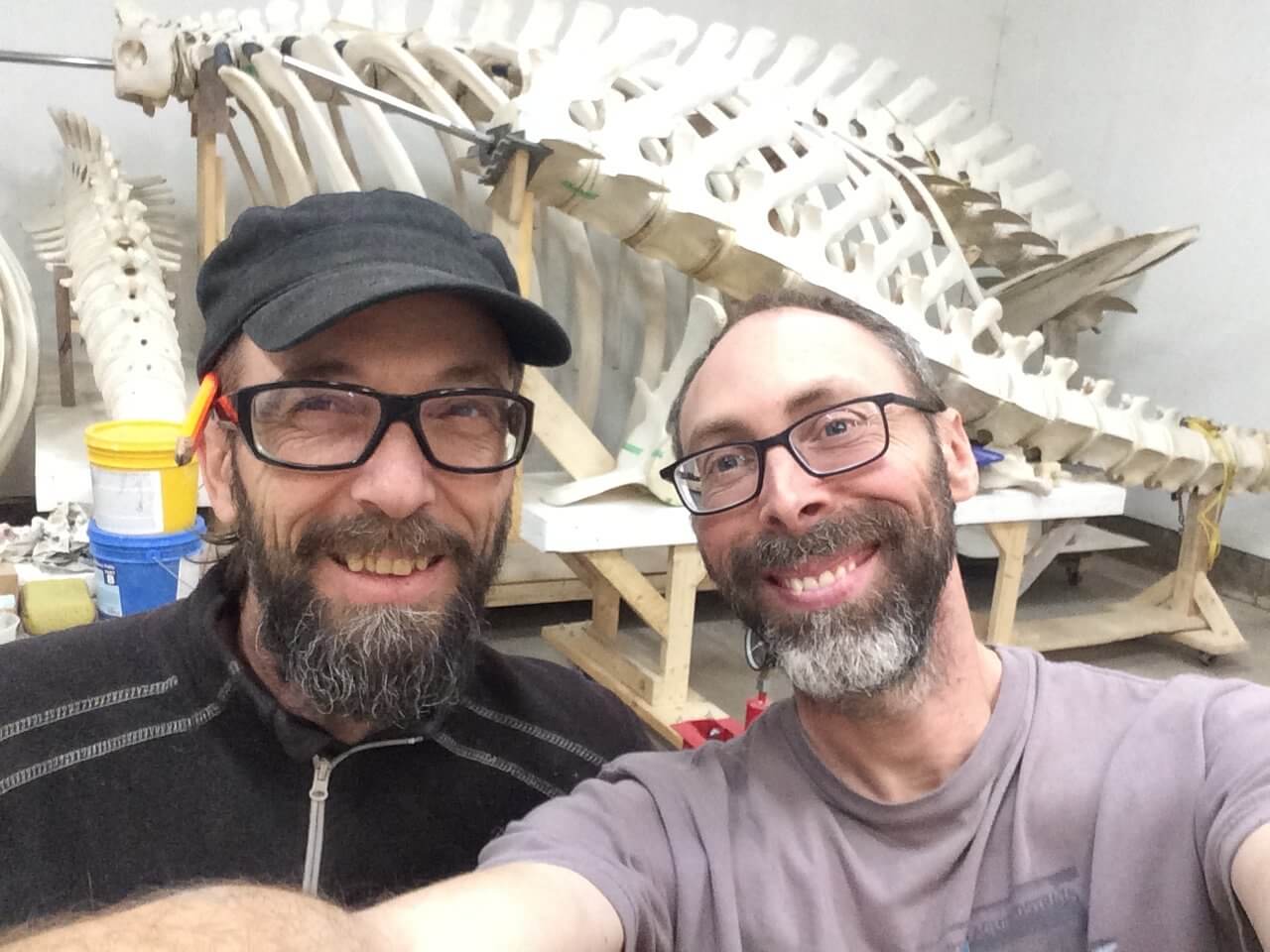 Fin whale vertebrae waiting to be put together. © GREMM

The vertebrae of the fin whale are assembled. © GREMM 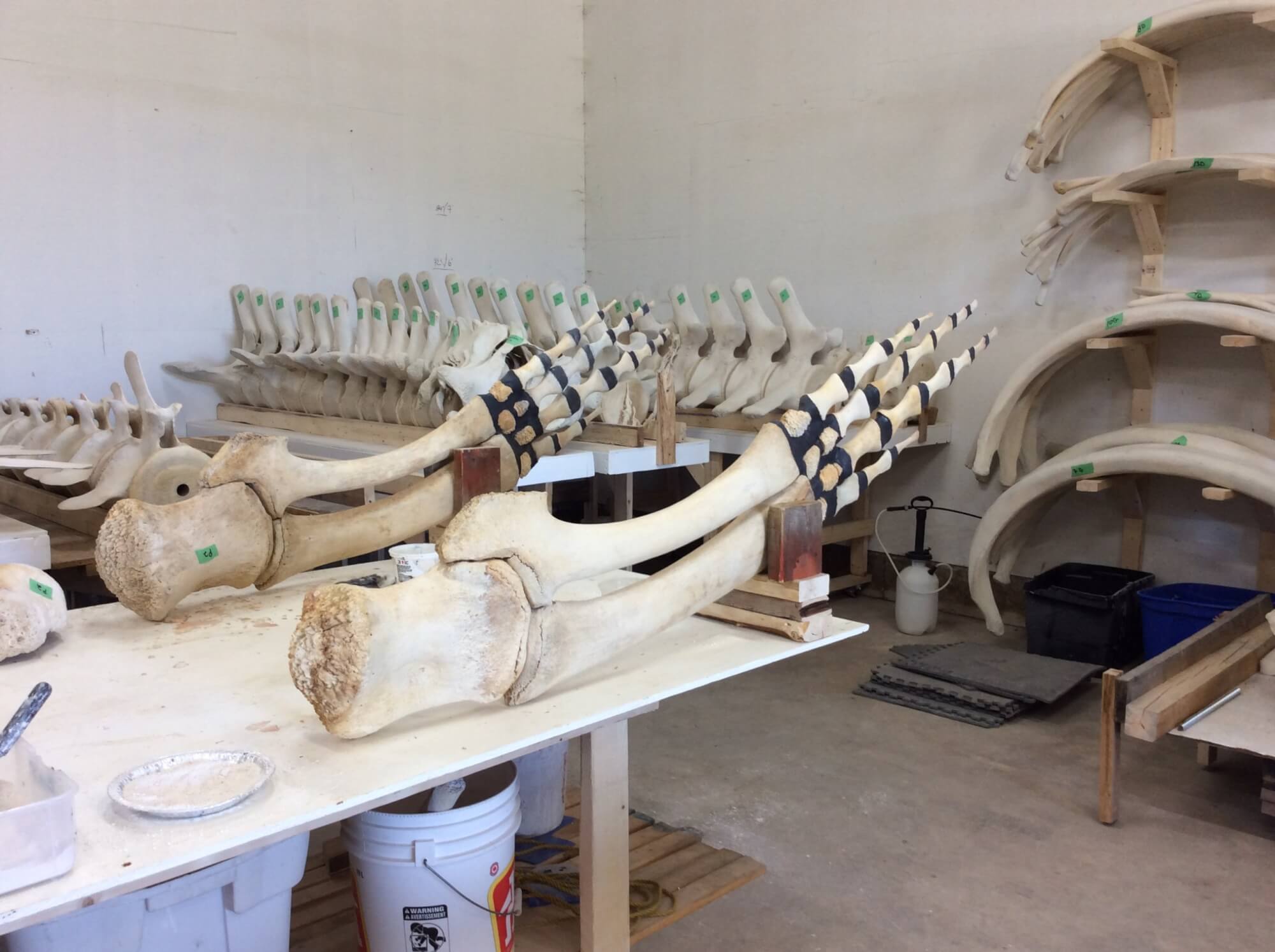