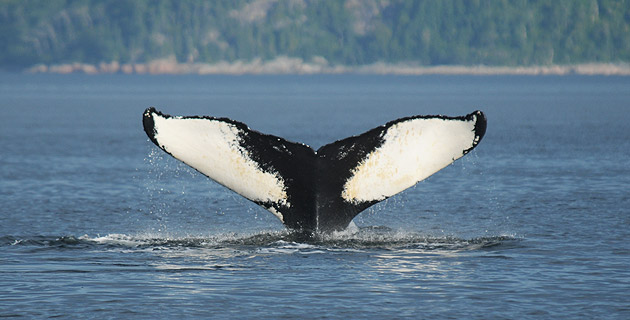 “This summer has been a busy one in Sept-Îles!” exclaims a resident observer from Gallix, near Sept-Îles. Since 1989, he has spent much of his time on the water in search of whales and working on marine mammals and other topics related to the Saint Lawrence for the Mingan Island Cetacean Study (MICS). Several fin whales that he knew from his early days seem to be back this summer. This week, he also crosses paths with three humpback whales, three minke whales, a fin whale, two blue whales, porpoises and a basking shark.

In 1997, exactly 20 years ago, the MICS team got to know the humpback H531, which the organization named La Souffleuse (in French). Since then, this female has been seen many times in the Gulf and Estuary and here she is again in the Mingan sector, accompanied by a newborn. Tic Tac Toe is also there with her calf. Highly mobile, the same humpbacks can be identified in several regions of the St. Lawrence within a given season. For example, Tic Tac Toe was identified earlier this summer, in June, in the Marine Park region. In 2002, joint MICS and GREMM data enabled La Souffleuse to be tracked over a journey from Tadoussac to the Mingan Archipelago and back again, i.e. 1,200 km in less than 15 days!  In addition to these two pairs of humpbacks, the MICS team also noted the presence of a dozen or so other humpbacks, some twenty fin whales, minke whales and porpoises. Two North Atlantic right whales are also noted.

In Franquelin, a collaborator also observes a mother-offspring pair, but of a completely different kind: razorbills. The head, neck and upper parts of these birds are black, while the underside is entirely white. They also feature a white line extending from the base of their laterally flattened bill to their eyes. Razorbills hunt small fish such as capelin and sand lances. Under the watchful eyes of the observer, the mother dives several times in search of these small prey to feed her young. Not far from them are several minke whales, harbour porpoises and Northern gannets.

Another marine predator caught feasting: a blue whale in Les Escoumins on July 28. Its gaping mouth expands like an accordion thanks to the skin folds of its throat and belly. The appetite of these whales leads them to consume between one and four tonnes of krill a day. Surprisingly, in one gulp, they can take in a volume of water nearly equal to their weight, i.e. 90 tonnes, before expelling it through their baleen. Two blue whales are recognized in the Estuary: B197 and B324. This morning, in the same area, the author of this text encounters a humpback breathing peacefully in front of the Marine Environment Discovery Centre… The humpback Siam was seen here the day before. Could it be him?

Also worth noting in the Estuary are huge herds of gray seals. These seals have also been numerous in Percé. They share with the whales and seabirds a “buffet” of herring, capelin, crustaceans, etc. Three humpbacks, a blue whale and a fin whale are also reported in the vicinity of the imposing rock.

In Saint-Siméon, a humpback whale is spotted by land-based observers. Especially frequented by minke whales and belugas, the Charlevoix region also hosts the occasional large rorqual. Another unusual sighting is that of a herd of about twenty belugas off Pointe Paradis near Baie-Comeau on the North Shore on July 29. In summer, belugas are mainly concentrated in the Estuary between Île aux Coudres, Forestville (Haut-Côte-Nord region) and Île du Bic (south shore) as well as the Saguenay Fjord. Within their summer habitat and during the peak tourist season, a few precautions should be observed when viewing these white whales on the water: always maintain a distance of at least 400 m and, if they approach, move slowly and cautiously to maintain this distance.