Drilling near the St. Lawrence: A threat to marine mammals? 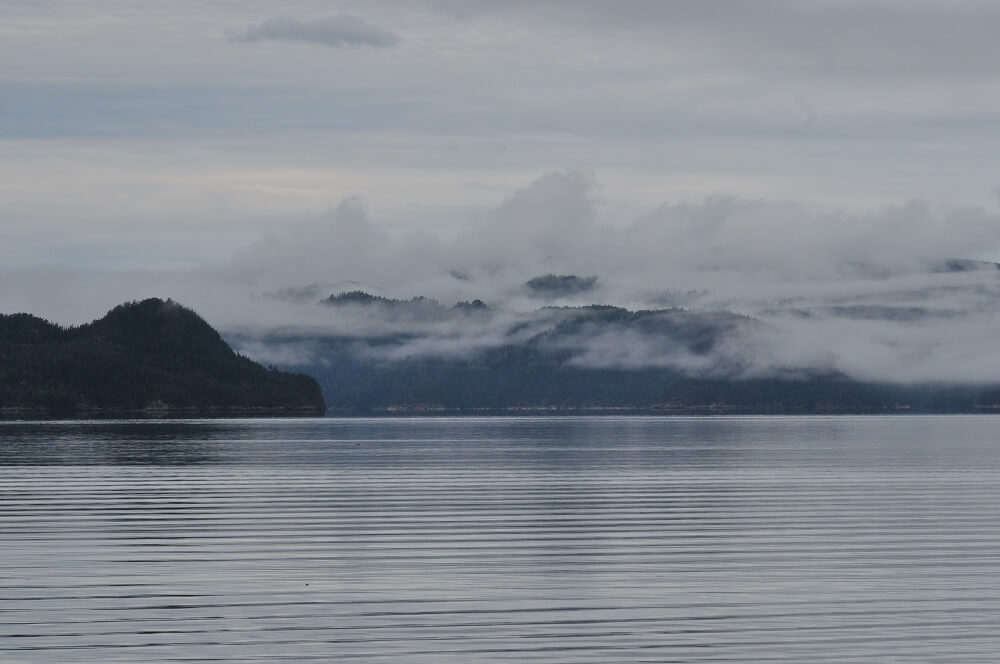 Much of Quebec’s territory along the river is already under licence for oil and gas exploration. © GREMM

Between now and Christmas, the Government of Quebec is hoping to put into place a regulatory framework for hydrocarbon exploitation in Quebec. Draft regulations for the implementation of the Petroleum Resources Act were published on September 20 and comments from individuals, groups and organizations are being accepted until December 9. Many scientists and citizens are concerned about the potential consequences of oil and gas development along the St. Lawrence River and its tributaries. Do current laws and draft regulations go far enough to protect the St. Lawrence marine ecosystem from the risks associated with this industry?

Current Protection in the St. Lawrence

In the part of the St. Lawrence upstream of the western tip of Anticosti Island, drilling is prohibited in the river and under the river, as per the 2011 Act to Limit Oil and Gas Activities. As for the Quebec portion of the Gulf downstream of Anticosti Island, it is currently protected by the 1997 moratorium. The Newfoundland and Nova Scotian portions of the Gulf are open to exploration.

What about the shores of the St. Lawrence and its tributaries? Much of Quebec’s territory along the river is already under licence for oil and gas exploration. Under the recent Petroleum Resources Act, adopted by the Government of Quebec in December 2016, a 20-metre-wide buffer on both sides of the river and its relatively high-flow tributaries is excluded from the territory under licence. However, drilling is permitted in and under watercourses and portions of low-flow rivers (natural force of less than 225 kilowatts at its ordinary flow for six months). Published on September 20, one of the draft regulations concerning aquatic environments specifies that shaft collars must be at least 40 metres from the St. Lawrence Seaway.

Fracturing 20 metres from the St. Lawrence and some of its tributaries

Hydraulic fracturing, more commonly known as fracking, is a controversial process used to extract hydrocarbons. The goal is to crack open the rock to release the gas or oil trapped inside. To accomplish this, a fracking fluid (consisting of water, sand and undisclosed chemicals) is injected at high pressure into a vertical, horizontal or angled well. Underground horizontal drilling may extend over a 2–3 km radius around the shaft collar. 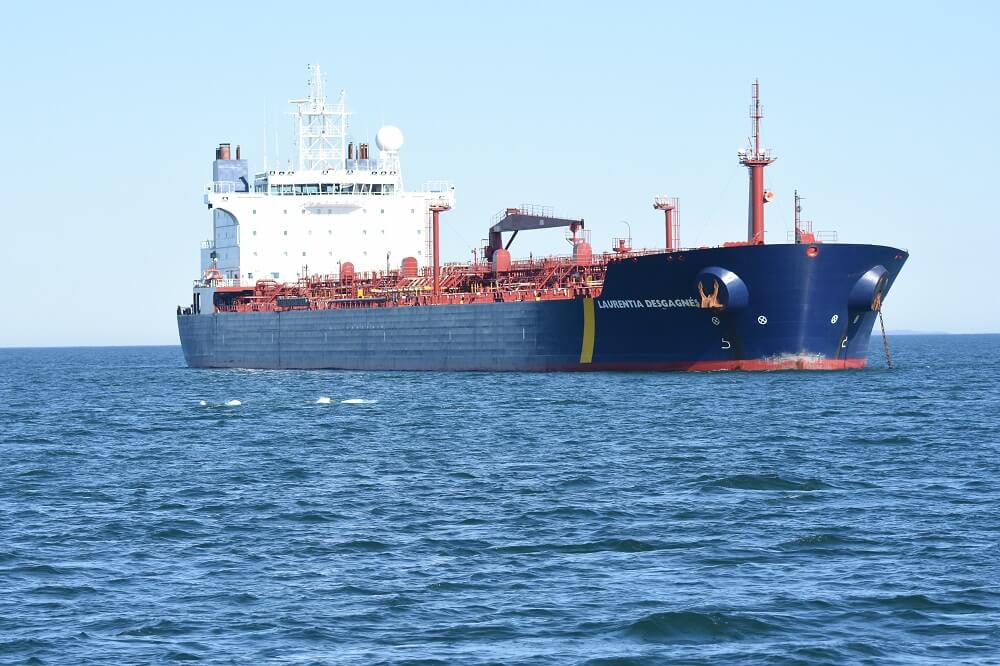 The goal is to crack open the rock to release the gas or oil trapped inside, and will be transported to ports by oil tankers. © GREMM

Does hydraulic fracking 20 metres from the St. Lawrence, as well as in and under some of its tributaries, represent a risk for marine mammals in the St. Lawrence? Can hydrocarbons and the chemicals used in the fracking fluid seep into the St. Lawrence, through natural cracks for example? Will the chemicals used be toxic? Will the oil and gas companies be capable of properly treating their wastewater? Many questions remain unanswered. The chemicals used in the fracking fluid will only be made public several years after the wells are closed. Researchers, municipalities and citizens do not have access to all the information they need to assess the potential consequences.

Looking to Our Neighbours

However, studies in areas where hydraulic fracturing is practised have been revealing potential impacts on biodiversity. A study conducted in the US Appalachian basin and published in 2013 in the Annals of the New York Academy of Sciences reveals that shale gas exploitation by means of fracking can have long-term effects on biodiversity and over an unusually large geographic area compared to other industries. The main long-term impacts, which are likely to be perceived over a large area, are habitat loss and fragmentation, chemical pollution, water quality degradation and alteration of the hydrological regime. Other effects, including noise and light disturbance and air quality degradation, may be more local and short-term.

An assessment by the US Environmental Protection Agency (EPA) — published in December 2016 and based on approximately 1,200 sources of data and information — concludes that hydraulic fracking has the potential to contaminate water resources at several stages of the process, including the accidental release of fracking fluids, injection of fracking fluids directly into underground drinking water resources, underground migration of liquids and gases, and inadequate treatment and discharge of waste.

Though difficult to evaluate the potential effects of this practice on marine species in the St. Lawrence with the information available, environmental groups seem to agree that the Petroleum Resources Act and its draft regulations do not adequately protect Quebec’s biodiversity from the risks associated with hydrocarbon exploitation. “The government is opening up Quebec’s lakes and rivers to oil and gas exploration. It will even be possible to drill right up to the edge of protected areas and national parks. Nature Québec will invest all of its energy and resources to oppose these measures that attack the heart of Quebec’s biodiversity,” declares organization director Christian Simard in a press release (in French). 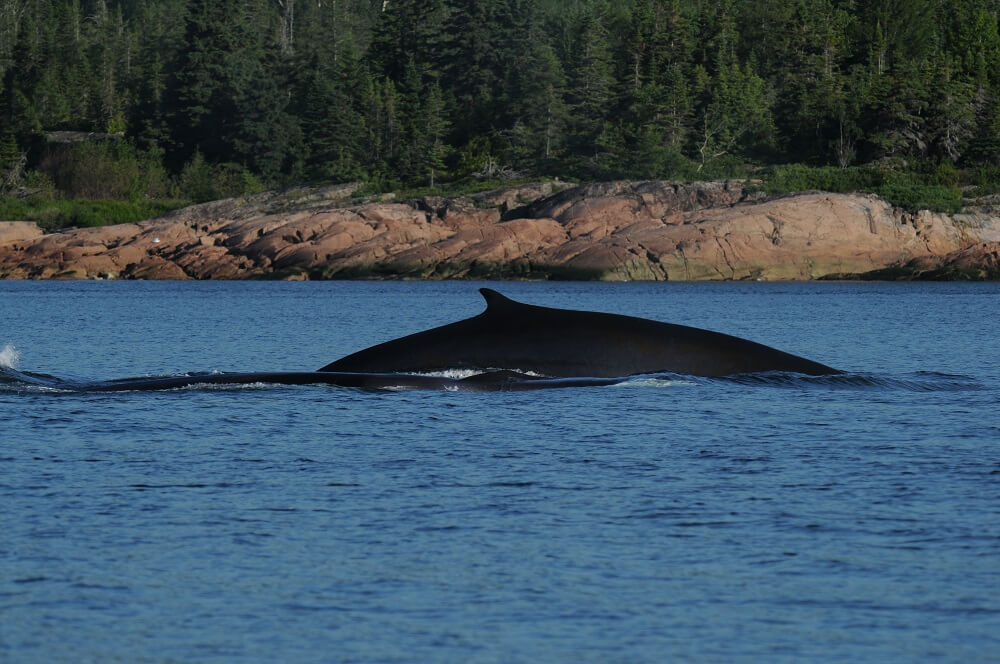 Citizens and scientists are standing together to protect their water, climate and environment, and, by extension, the whales of the St. Lawrence. © GREMM

Many citizens, environmental groups and unions — including the Centrale des syndicats du Québec, the Union des producteurs agricoles, Nature Québec, Équiterre, the David Suzuki Foundation, Greenpeace, Boréalisation, Eau Secours and RVHQ — deplore “the inevitable impacts on the environment, the global climate, biodiversity and human health that would result from the application of the draft regulations.” They demand the complete withdrawal of these regulations, the suspension of the Petroleum Resources Act and a rapid and complete exit plan for the oil and gas industry in Quebec. Between October 19 and December 4, over 31,000 citizens signed a petition entitled “No Drilling!” As was the case for the Energy East pipeline project in 2016, citizens and scientists are standing together to protect their water, climate and environment, and, by extension, the whales of the St. Lawrence.