Do dolphins get Alzheimer’s? 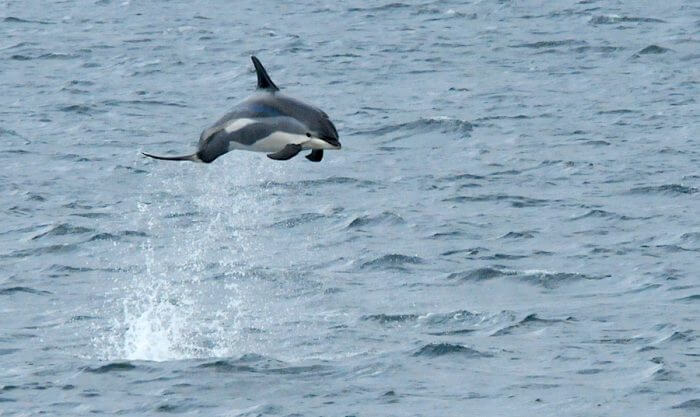 The “Alzheimer’s disease in humans and other animals: A consequence of postreproductive life span an longevity rather than aging” study shows for the first time that the accumulation of two proteins, accumulation associated to Alzheimer’s disease, is observed in the brain of a wild animal, a dolphin. On the picture, a white-sided dolphin. © Renaud Pintiaux

For the first time, a study has shown clear signs of Alzheimer’s disease in a wild animal: the dolphin. Both dolphins and humans have a long post-productive lifespan, and Alzheimer’s disease may be one of the costs of our longevity, the study suggests.

The research team – made up of scientists from the Universities of St. Andrews and Edinburgh in Scotland, the University of Florida in the US, and the University of Oxford in England – has detected signs of Alzheimer’s disease in the brains of dead dolphins found stranded along the coast of Spain. The team analyzed the accumulation of two proteins in dolphin brains: at the extracellular level, the accumulation of a protein called beta-amyloid, which causes senile plaques, and, at the intracellular level, the aggregation of a protein called tau, which triggers neurofibrillary degeneration. These senile plaques and neurofibrillary degeneration are the hallmarks of Alzheimer’s disease.

“It is very rare to find signs of full-blown Alzheimer’s disease in non-human brains,” says Simon Lovestone, a researcher at the Oxford University Department of Psychiatry

“It is very rare to find signs of full-blown Alzheimer’s disease in non-human brains,” says Simon Lovestone, a researcher at the Oxford University Department of Psychiatry and co-author of the study. This is the first time that the accumulation of these two proteins associated with Alzheimer’s have been observed in the brain of a wild animal.

Do dolphins with these signs of disease suffer from memory loss and confusion similar to what is observed in humans with Alzheimer’s? At this stage of research, scientists are unable to answer this question. This is difficult to verify in a wild species and the research team does not advocate testing dolphins in captivity.

A correlation between longevity and Alzheimer’s?

The research team suggests that predisposition to Alzheimer’s disease and human and dolphin longevity are, at least in part, the result of alterations in the way insulin works in these species. Insulin regulates the level of sugar in the blood and triggers a complex chemical cascade known as “insulin signalling”. Scientific studies have shown that extreme calorie restriction in mice and fruit flies can alter insulin signalling and extend the lives of these animals by up to three times. Researchers believe that in humans and cetaceans that have a long post-reproductive life, insulin signalling may have evolved to function in a way similar to that artificially produced by severely limiting caloric intake in mice. “That has the effect of prolonging lifespan beyond the fertile years, but it also leaves us open to diabetes and Alzheimer’s disease,” explains Simon Lovestone.

Indeed, impaired insulin signalling may cause diabetes in humans and other mammals. Studies also show that insulin resistance makes humans more prone to the development of Alzheimer’s disease.

If these scientists are correct, alteration of insulin signalling would have increased longevity in humans tens of thousands of years ago. No need to adopt an extreme low-calorie diet in hopes of extending your life: evolution has already done that!