Do Blue Whales Serenade Their Partners? 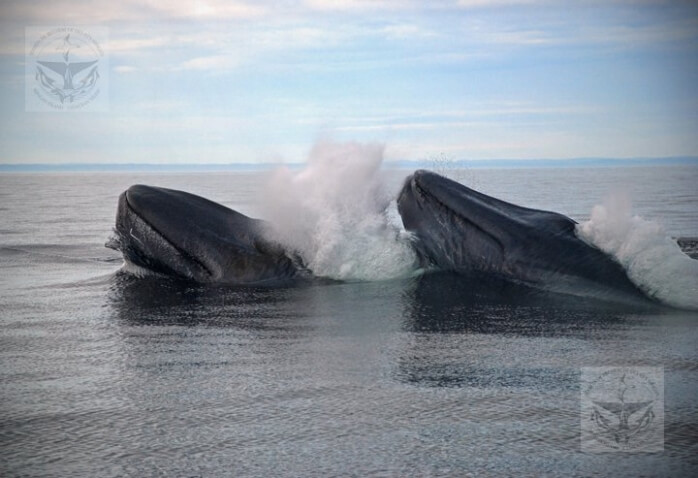 For four decades, research on blue whale behaviour has been trying to unravel the mysteries of their reproduction. A bit like the tip of an iceberg, it is possible to observe fin whales on the surface, but what about the 95% of the time they spend under water? Where do they breed, and when?

Blue whales are known for their epic annual migrations, between high latitudes where they feed in cold, productive waters like those of the St. Lawrence, and low latitudes, where they give birth in warmer waters. But for some blue whale populations, the migration route is not as clear and may not be linked to reproduction. In fact, reproduction can take place in different places and in different seasons.

A study published in Marine Mammal Science last September sheds some light on the life cycle of the mysterious blue whale. Three visual observations of blue whale trios were matched with acoustic recordings to try to understand the function of the animals’ behaviours and vocalizations. Interestingly, observations were made in both the North Atlantic (St. Lawrence Estuary) and the South Pacific (Gulf of Ancud). 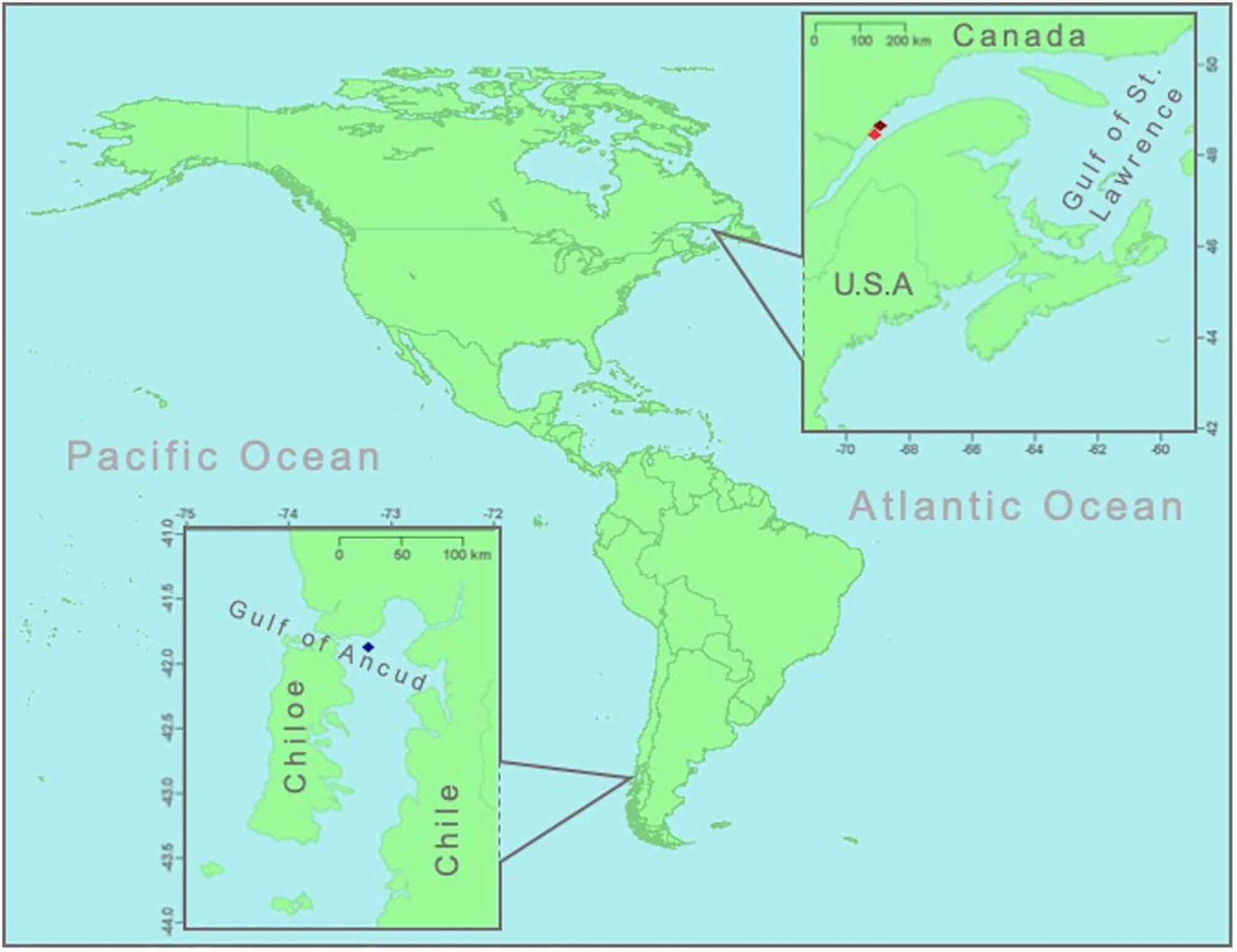 The trio where observed both on the east side and the west side of the continent. © Schall et coll

Tip of the iceberg

What researchers have seen at the surface is blue whales forming pairs in feeding areas in both the Atlantic and the Pacific, for several days or weeks before embarking on their marathon migration, potentially to warmer seas. Thanks to photo-ID techniques or biopsies, a number of duos could be confirmed as being composed of a male and a female. But these pairs can be disturbed by other males, which join in to form spectacular trios that can last up to several minutes. At the surface, the female swims at a healthy pace while two males chase after her. Imagine two blue whales, the largest animals on the planet, jostling to outrace each other. Watch out for the swell! Blue whale researcher and co-author of the study Richard Sears likes to call this type of behaviour a “rumba”.

Might this physical race between the three animals be a prelude to breeding to win the heart of (or, less romantically speaking, access to) a female? According to the experts, it’s very likely! 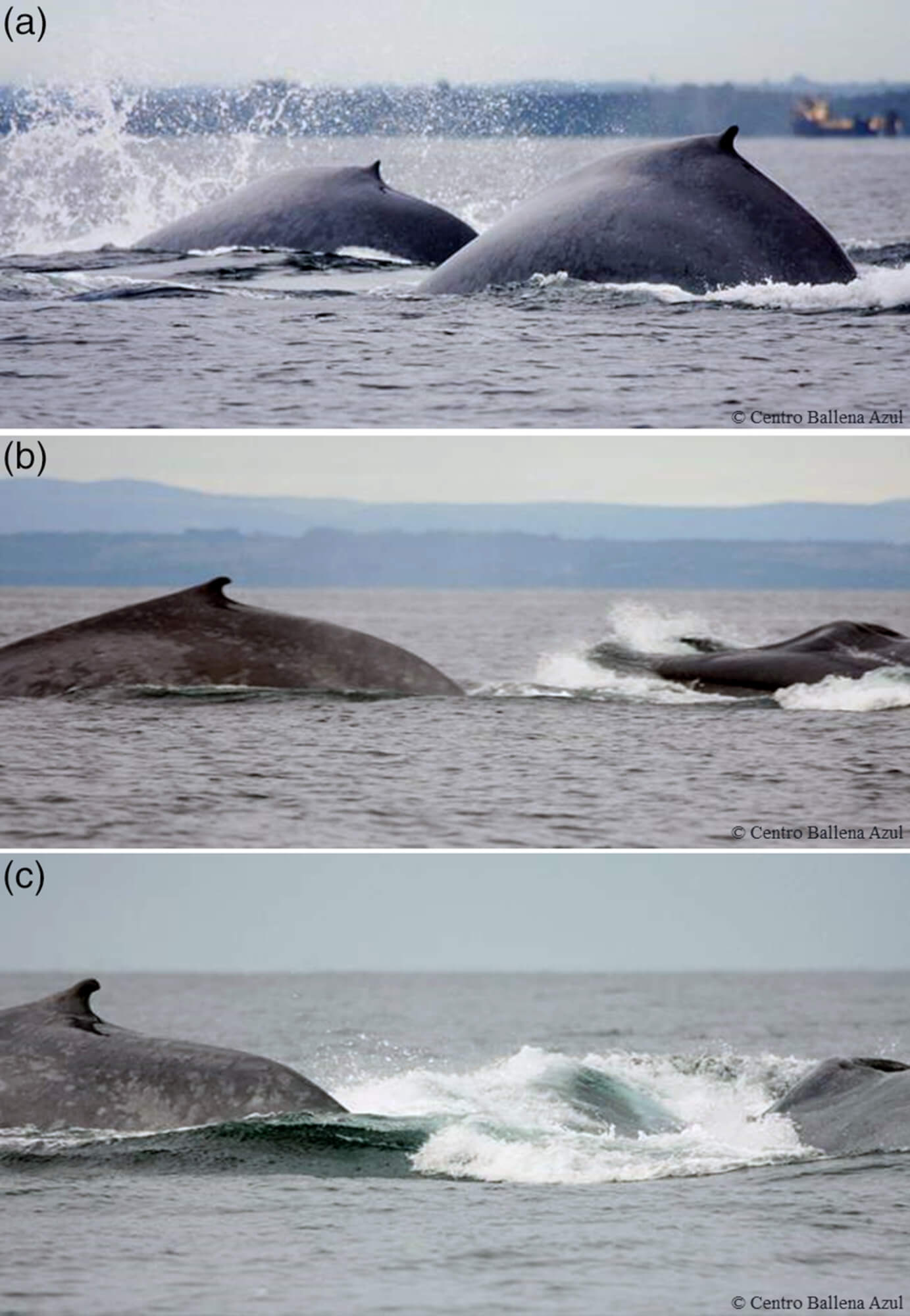 The trio from Chili performing a «rumba» © Centre Ballena Azul

D-calls: What is being said under the surface?

Besides surface observations, another clue has recently been decoded to help researchers better understand whales’ reproductive jargon. The acoustic recordings of the communications of the three trios were correlated with observations of the courting blue whales. In all three cases, the trios produced calls known as “D-calls”, which are repeatedly only when the trio is being formed.

D-calls are recorded in nearly all blue whale populations in situations where some degree of social cohesion is needed, for example between a female and her calf, and are usually produced in contexts where another blue whale is in proximity. In the cases presented in the study, the D-calls recorded near the trios were repeated at short intervals. This is the first time that calls of this sort were recorded for this species. The D-calls were produced by at least two different individuals, as some of the calls overlapped.

Do blue whales serenade to win the heart of a coveted female? Not exactly. In marine mammals, a song is a series of different types of calls emitted in a specific order. In this case, it is more like a repetition of the same type of call. D-calls are produced by both males and females, unlike in humpbacks, where only males sing during the breeding season.

Does the D-call in a trio context serve to maintain the bond between the initial pair? To express the female’s interest in one male over the other? The function of these calls remains to be clarified. But from a conservation perspective, these repeated calls could soon be used as acoustic markers to detect areas where reproductive activities take place. If our hydrophones and computers can recognize certain types of calls, perhaps we can identify critical breeding locations for blue whales, an endangered species?

According to the authors, “Such information on blue whale reproductive behaviour is extremely rare, but crucial to better understand the breeding strategies of this species.”