Diversity of Species and Behaviours to Discover 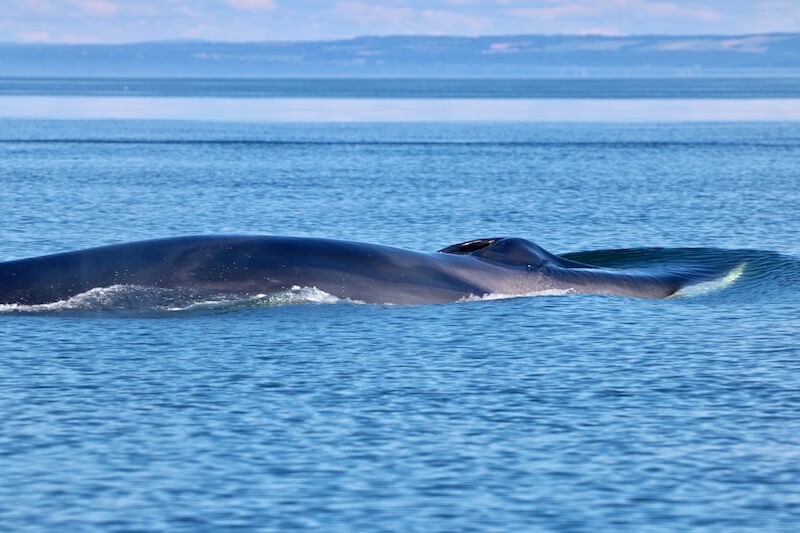 “They come here to eat.”… a phrase often repeated by captains and naturalists from the get-go when speaking to the public about migratory whales arriving from the Atlantic to spend the summer months here. “What’s on the menu?” ask the visitors. Small prey that the whales engulf by the tens of kilos with each gulp. Zooplankton composed of krill and copepods and small fish that live and move in schools. Porpoises and dolphins are fond of pelagic fish such as herring and capelin. Feeding techniques vary by species, prey and territory. As it happens, in the Estuary, Gaspar is surprised as she practises the bubble curtain technique to corral and trap her prey. The male Siam, on the other hand, surfaces on his side, his mouth agape and his ventral pouch bulging.

In Franquelin, our collaborator closely tracks the appearance of harbour porpoises at the water surface while gannets dive like meteors all around. These birds are impressive! They have excellent binocular vision thanks to their eyes positioned on either side of their bill. From the air, they scan the surface to spot schools of fish before dive-bombing their prey from a height of 10 to 40 m. To do this, they tilt and gradually close their wings to accelerate their descent. A fraction of a second before impact, the wings remain tucked backwards like an extension of their body, so as to better penetrate the water. Once under water, they capture fish on their way back up to the surface. They also have good underwater vision and can compensate for the misleading effects of the submarine environment. The modified curvature of their eyes is obtained by muscles that compress the rather soft crystalline.

The Gulf of St. Lawrence also attracts its share of great globetrotters this week. The Mingan Island Cetacean Study (MICS) team tallies six humpback whales (including a sixth calf!), a dozen or so fin whales (including a mother and her newborn), and about ten minke whales. In the Gaspé Peninsula, members of the team report nearly a dozen humpbacks. “They are mostly between Cape Gaspé and Cap des Rosiers,” says a whale-watching guide from the area.

Sometimes whales can be quite flamboyant! On July 6, off Les Bergeronnes, a minke whale breached several times, captivating naturalists and visitors to Cap de Bon-Désir. A similar observation occurred on July 10 in the Mingan Island region. Moreover, the moment is immortalized in the photo shot by one of the researchers.

Eat, breach, swim for kilometres in search of adequate concentrations food … whales need to rest, too! Some float on the surface, others slow down and stop diving, some even sleep upside down! On July 10, off Les Escoumins, Siam “logs” on the water surface. He partially emerges his body regularly to breathe. Breathing in whales is “conscious”, meaning that it is under the voluntary control of the central nervous system (CNS). Unlike us, who continue to breath even when we’re in a deep sleep, whales remain partially awake in order to maintain the necessary state of alertness to control their breathing.