Critical St.Lawrence beluga habitat to be protected at last 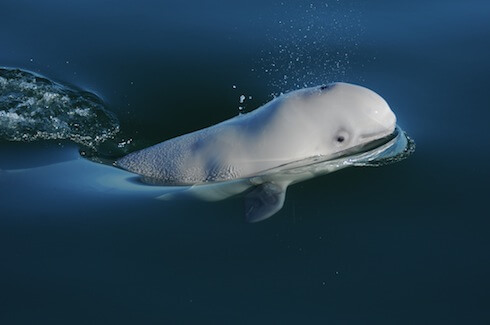 The Government of Canada has published a notice in the Canada Gazette announcing that under the federal Species at Risk Act (SARA), critical habitat of the St. Lawrence beluga will be legally protected.

The St. Lawrence beluga was listed as threatened under SARA in May 2005. Its critical habitat, in other words the habitat without which this population would be unable to recover, was presented in 2012 in the Beluga Recovery Strategy. Critical habitat is bound by the Upper Estuary, the Saguenay River upstream as far as Baie Sainte-Marguerite, and the South Channel in the Lower Estuary. This is where female whales calve and take care of their young during the summer. Females show a very strong attachment to this habitat, which is characterized by abundant prey and shallow bathymetry, and return there every summer.

Under SARA, critical habitat must be legally protected against destruction. For example, activities that might generate excessive noise or a significant decline in the availability of prey within critical habitat, and which could prevent belugas from performing vital functions such as feeding, caring for young and socializing, would constitute a destruction of critical habitat and would be prohibited.

This legal protection of critical beluga habitat should have been announced no more than 180 days after the submission of the final recovery strategy, i.e. almost 4 years ago. The Group for Research and Education on Marine Mammals (GREMM), which for the past three decades has been collecting data used to identify critical habitat and monitor this population, welcomes this announcement by the government. “The beluga population in the St. Lawrence is once again in decline and, since 2010, we have observed increased mortality in newborns. Today, we are hopeful that the protection of critical beluga habitat will reduce the threats faced by females and their calves. This is fundamental to the survival and recovery of this emblematic population”, points out Robert Michaud, GREMM President and Scientific Director.

“However, the previous federal government’s omnibus budget bill of 2012 left a loophole in the enforcement of bans regarding critical habitat,” argues Christian Simard, General Director at Nature Québec. He continues, “Indeed, a certificate delivered in accordance with a decree issued under the National Energy Board Act still leaves the door open to bypass bans concerning critical habitat”. In a May 16, 2016 press release (in French), the Quebec Chapter of the Canadian Parks and Wilderness Society (CPAWS Quebec), the World Wide Fund for Nature (WWF-Canada), Nature Québec, the David Suzuki Foundation and the Quebec Environmental Law Centre (CQDE) commend the Canadian government’s decision to protect critical beluga habitat but ask that the government “continues its ‘spring cleaning’ and permanently closes this last loophole”.