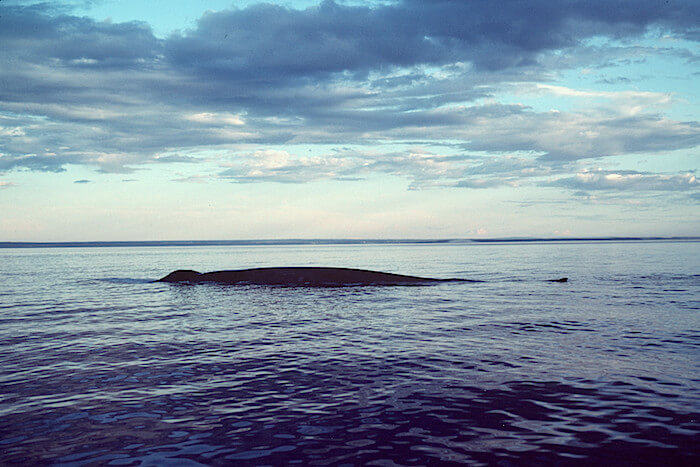 Their gaping mouth expands like an accordion thanks to the skin folds of the throat and belly, while their baleen retain a phenomenal amount of krill. Such is the description of the hearty meal consumed by a blue whale and the scene observed by our Franquelin-based collaborator on the morning of February 19.

Two blue whales are seen swimming in open waters three kilometres away. She sees them surface, turned onto their side with their mouth wide open and one of their pectoral fins pointing skyward. After watching them feast for 45 minutes, the observer abandons her lookout as the two giants head farther east. However, the sightings don’t end there! She would see them twice more later in the day.

As a migratory species, blue whales should normally leave our area for the winter, but the krill-rich waters of the Estuary and Gulf are like a magnet to them. Their appetite causes them to consume between one and four tonnes of krill a day. Surprisingly, in one gulp, they can take in a volume of water nearly equal to their weight, i.e. 90 tonnes, before expelling it through their baleen. From their rostrum to their belly, the whales are equipped with longitudinal furrows which allow their mouth and throat to stretch considerably. According to a study by Canadian and US researchers, ventral grooved blubber expands by 162% in the circumferential direction and 38% longitudinally. The elasticity of the nerves present in these parts of the body is believed to help make the gulping mechanism possible.

Another witness from the Franquelin sector reported seeing the two blue whales on the morning of February 19. Later that day, she even managed to film one of her giants, footage that she’s only to happy to share! The previous day, she had spotted a humpback whale about two kilometres off the bay of Saint-Pancrace. “The whale season has begun!”, she points out.