Can whales be counted using photos taken from outer space? Two researchers from Perth, Australia, are attempting to conduct a survey of humpback whales migrating along the west coast of Australia using satellite images taken 600 kilometres above the Earth. This new technique for tallying whales is promising.

Surveys are essential for monitoring populations and implementing conservation measures for populations at risk. They are usually performed visually by humans from a ship, aircraft or land-based site. These techniques are often costly, complex and can sometimes be lacking in accuracy.

Researchers Michele Thums and Curt Jenner decided to test a new technique for counting whales. They ordered two satellite images, which they then spent several long days combing over in order to familiarize themselves with what whales look like from space. Their observation: the satellite images, being of very high resolution (resolution of 30 cm, with approximately 40 pixels covering a whale), make it possible to identify whales with a fairly large degree of certainty. However, the process is quite time-consuming. They are currently performing a cost-benefit analysis of the technique to determine whether a long-term whale monitoring program using satellite imagery would be viable. They are also trying to develop a software program that can be used to spot whales more quickly in black-and-white satellite images.

In order to survey St. Lawrence belugas, tests were also conducted by Fisheries and Oceans Canada in 2012 using archived images taken in 2009 by GeoEye-1 and WorldView-1. Researchers had selected the images based on the distribution of belugas observed during surveys in August 2009 and the weather conditions on the days for which images were available. You can see an example of a satellite image zoom where researchers identified a group of belugas. “As this image was taken in the Estuary on a calm day, it is unlikely that these white objects are anything but belugas,” explains DFO biologist Jean-François Gosselin. “But at times or places where there are blocks of ice or waves, identification becomes more tricky. With images of this quality, it is difficult to distinguish belugas in areas where there are waves and tide rips such as at the mouth of the Saguenay. This is a problem for a survey of St. Lawrence belugas, where these situations are frequent. And for the price of satellite images, we can conduct 6 visual surveys,” he continues. For the time being, Fisheries and Oceans Canada continues to perform its surveys visually. “With more accurate images and more affordable costs, satellite images might eventually replace aerial surveys… we weren’t too far off with the 2009 images,” explains Gosselin. 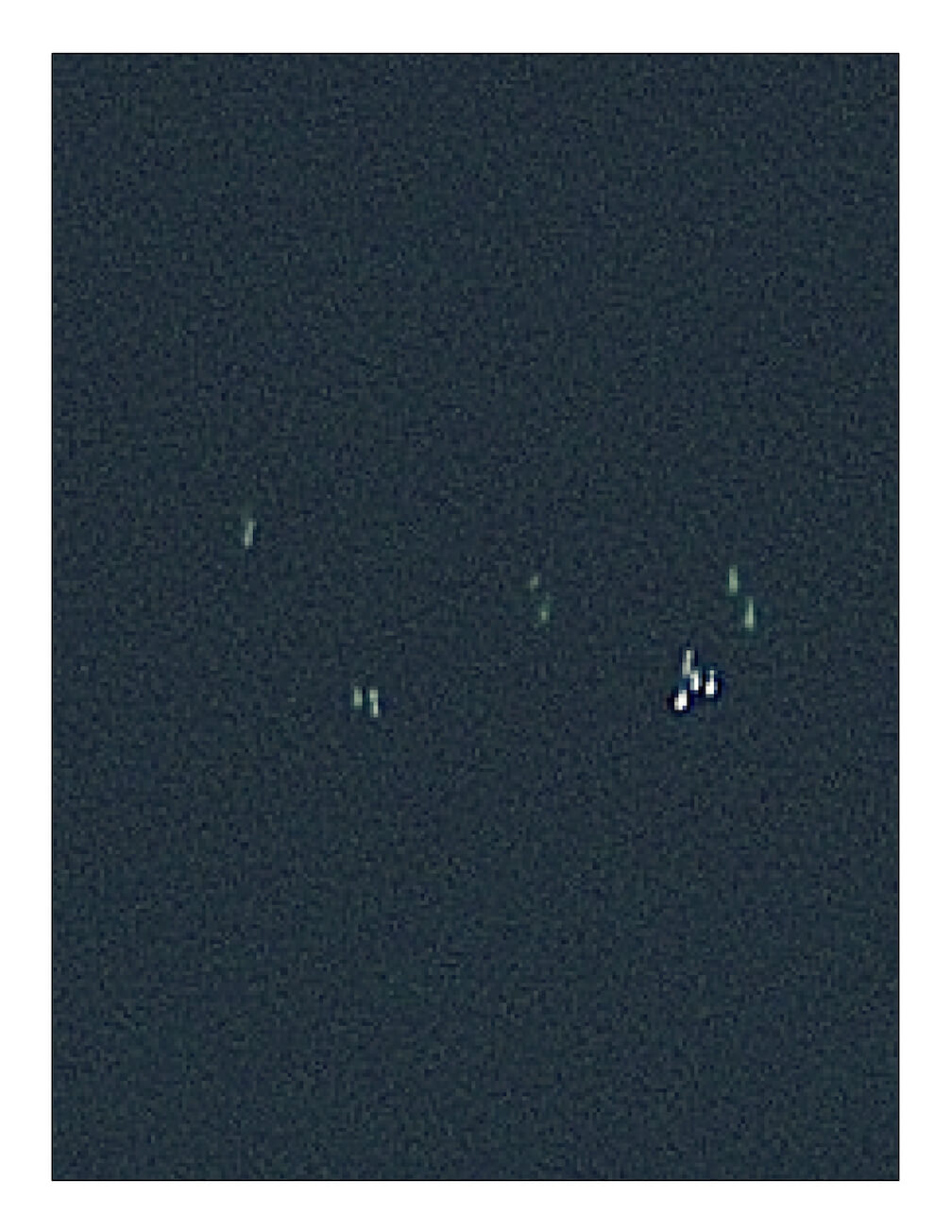 Satellite image took in 2009 by GeoEye-1, where we see a group of beluga whale of the St. Lawrence river

In recent years, better performing Earth observation satellites have been put into orbit, including the WorldView-3 launched in August 2014. Thanks to increasingly accurate satellite imagery and the development of software allowing whales to be discerned automatically, counting cetaceans from space could become commonplace.