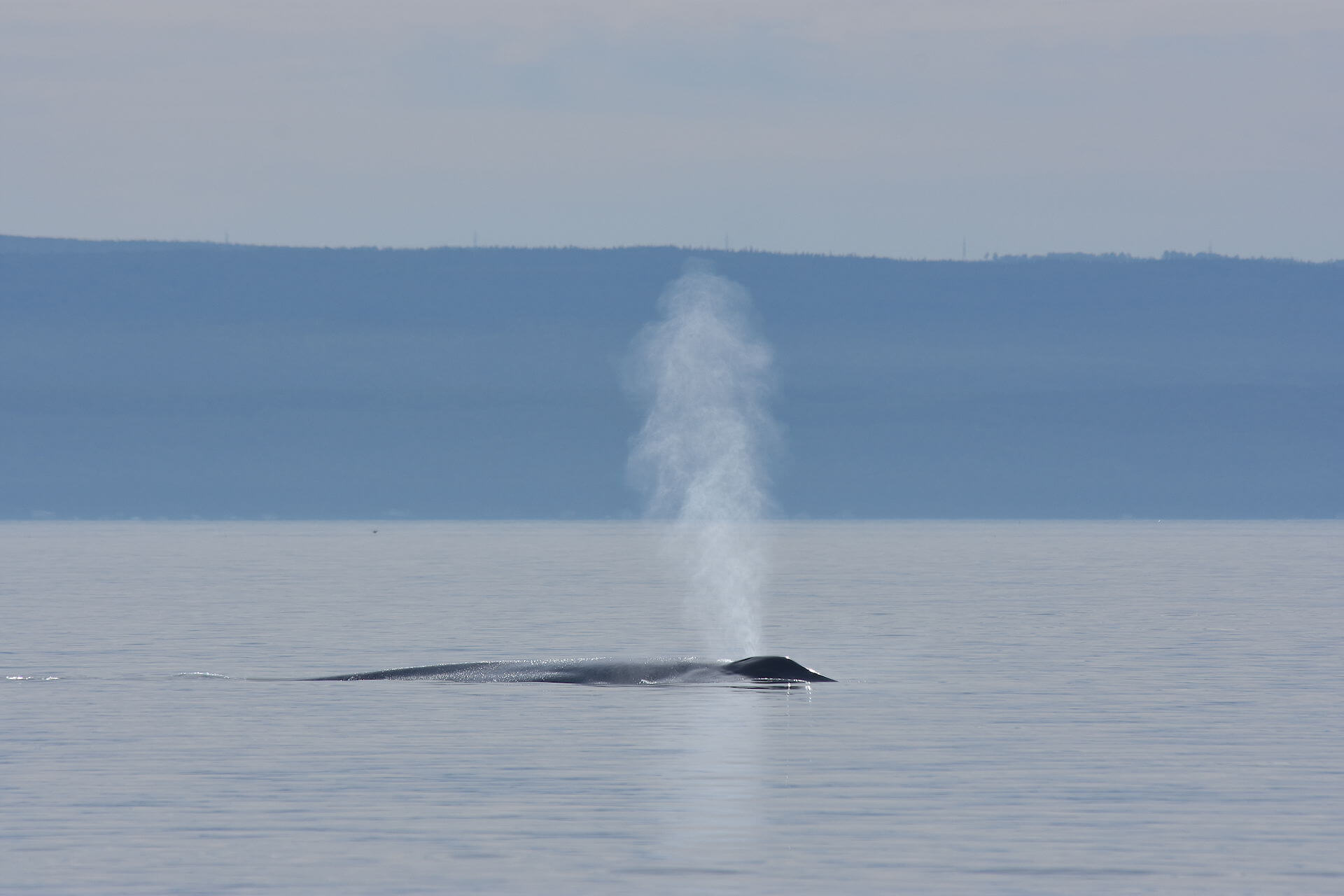 The Mingan Island Cetacean Study (MICS) team, based in Longue-Pointe-de-Mingan, is geared up for its 40th season on the water! The team heads out to sea on June 11. However, the wind begins to blow harder and harder, and the first foray of the season is cut short. All the same, they encounter two minke whales and large herds of harp seals. In recent weeks they have finished compiling photo-ID data for Northwest Atlantic blue whales. Good news: 77 individuals have been identified in 2017 – of these, 19 are new, bringing the total number of individuals in the catalogue to 525!

Speaking of blue whales, a Gaspé-based whale-watching guide reported a sighting made by the crew on board the Coriolis II research vessel of three blue whales in the Banc des Américains area (southern Gulf of St. Lawrence) one week earlier. This individual spotted tall, straight spouts that he suspects belonged to blue whales. In addition to these blows, he points out that the majority of his observations during the past week were of humpbacks. In fact, one of them was recognized: female H692, a.k.a. Paloma, who was observed on June 8. On June 12, the first fin whale of the season was found in this area and a humpback whale was seen breaching twice.

In Sept-Îles, the female humpback Manta was identified west of Île du Corossol on June 2. She’s not the only one of her kind to have been spotted: on June 3, a humpback was seen swimming surprisingly close to shore, about 800 metres off the coast. Meanwhile, numerous harbour seals have made their home in the Bay of Sept-Îles and two fin whales were reported to the Municipality of Port-Cartier on June 10. In Pointe-des-Monts, two humpback whales are observed, their tails gracefully rising in the air whenever they dive.

The presence of whales is also revealed by the trail that these giants leave behind known as flukeprints. The latter is created by the vertical movement of their tail, which creates an underwater vortex. When it reaches the surface from below, this mass of agitated water pushes the water outward, forming an oval-shaped slick patch, without the usual wavelets. As a picture is worth a thousand words, here is a video created by the magazine Hakaï that explains this phenomenon. These clues were used to identify two fin whales in the Saguenay-St. Lawrence Marine Park area on June 11.

Minke whales have also been numerous in the sector. These hungry hunters approach the coast in pursuit of schools of small fish. In Les Escoumins, the capelin have started “to roll”. Chef Daniel Vézina was present and was able to participate for the first time in this unorthodox fishing technique, which consists of harvesting these small silvery fish by the shovel-full in the middle of the night!