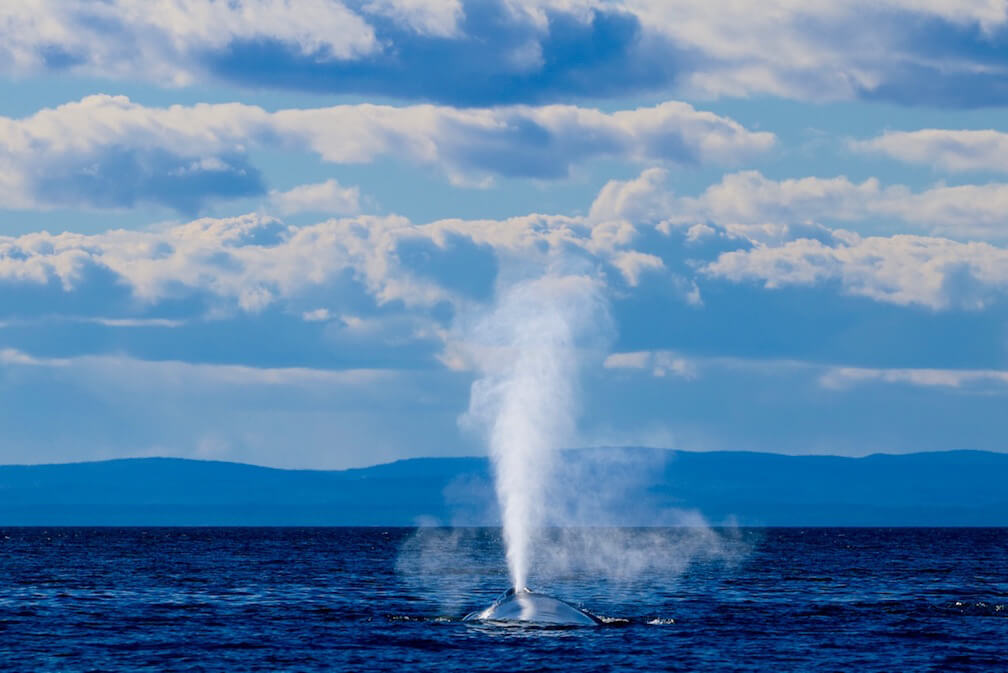 According to a recent study conducted by researchers at Fisheries and Oceans Canada (DFO) and the Rimouski-based Institute of Ocean Sciences (ISMER), vessels within 400 metres of a blue whale disrupt the latter’s ability to feed.

Largest animal of all time, the blue whale is a seasonal summer resident of the Gulf of St. Lawrence and its Estuary. The recurrent presence of this rare and impressive animal has spurred the development of an important whale-watching industry in the Estuary over the past few decades. The proximity of vessels triggers immediate behavioural changes (e.g. changes in trajectory or interruption of current activity, including breathing, feeding or caring for young) in a variety of marine mammal species. Such behavioural changes can result in increased energy expenditure or reduced energy savings in animals. When repeated or persistent, such disturbance can ultimately affect the survival or recovery of a population.

In the St. Lawrence Estuary, the blue whale spends most of its time feeding in order to build its fat reserves before embarking on its long fall migration to its breeding grounds. It is these accumulated fats that will allow the whale to breed and nurse its young throughout the winter. Does the proximity of whale-watching boats in the St. Lawrence Estuary hinder the blue whale’s ability to feed? Researchers at DFO and ISMER have attempted to answer this question by observing the behaviour of blue whales both in the presence and absence of boats. Spending over a hundred hours at sea between Cap Colombier and Les Bergeronnes, researchers tracked 33 individual blue whales, taking note of the behaviour of the whale and any boat present within 2,000 m from the animal.

The results of this study, recently published in the scientific journal Endangered Species Research, reveal that when a vessel is present in proximity to a blue whale (particularly at distances of less than 400 m, though effects are noticeable up to 1,000 m), the latter spends less time at the surface, takes fewer breaths and makes shorter deep dives.

A marine mammal must return to the water surface regularly in order to breathe. Generally speaking, the more time it spends at the surface replenishing its oxygen reserves, the more time it can spend feeding deep below. According to the results of this study, this also appears to be the case for the blue whale. If the animal spends less time at the surface due to a proximate watercraft, it consequently has less oxygen in reserve and must shorten his dives. According to researchers, if a vessel is present within 400 m of a blue whale, the animal winds up spending at least 36% less time feeding in deep waters.

The conclusions of this study are based on the average behaviour of boatmen, that is to say that it was not possible to study the degree of reaction as a function of speed or angle of approach, the type of vessel and the degree to which the animals were encircled. Nevertheless, “this study reveals that the blue whale is particularly sensitive to the presence of boats in the vicinity,” says Véronique Lesage, researcher at the Maurice Lamontagne Institute (DFO) and leading author of the study.

This study also demonstrates the relevance of a minimal approach distance to limit the effects of observation activities on blue whale feeding. In the Saguenay-St. Lawrence Marine Park, according to the Marine Activities in the Saguenay-St. Lawrence Marine Park Regulations, vessels must maintain a distance of at least 400 m from any endangered marine mammal, including the blue whale and the beluga. However, elsewhere in the Estuary, where the majority of blue whale gatherings take place, the Marine Mammal Regulations established under the  Fisheries Act prohibit disturbing whales, but do not specify a minimum approach distance. Researchers therefore suggest extending the minimum approach distance of 400 m beyond the boundaries of the Marine Park.