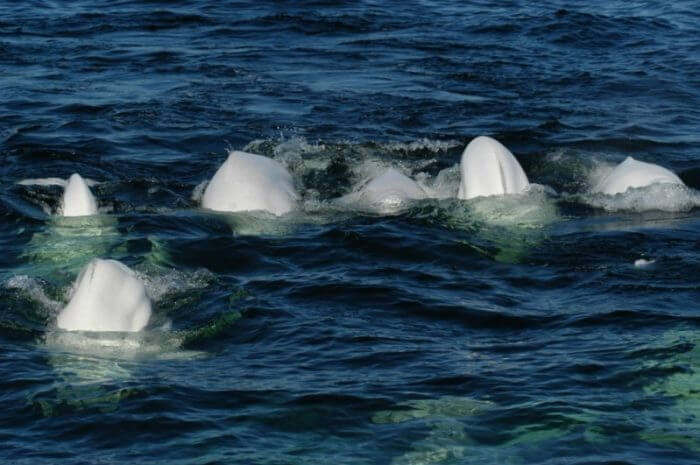 When a group of belugas travels together, their distinctive white bodies stand out at the surface of the water, making them easily recognizable. © GREMM (archives)

Yesterday a visitor at the Marine Mammal Interpretation Centre (CIMM) saw several belugas across the Saguenay Fjord through light flurries. “We saw at least 15-20 of them”, she said.

The same day, an observer aboard an excursion boat saw lots of grey seals in the Saguenay-St. Lawrence Marine Park. And right in the beginning of her tour, she also saw a minke whale, and then spotted tall, bushy blows in the distance. The blows were soon followed by a stubby, little dorsal fin with a hump — a feature peculiar to humpback whales.

The ferry passengers have also been lucky these days. From the dock of the ferry for Godbout-Matane, an observer reported three minke whales and thirty porpoises travelling in the rough waters. “There might have been more whales than that, but the sea was too rough to see clearly”, he adds.

On the Matane-Baie-Comeau ferry, another observer saw three minke whales during the ride and three humpback whales while the boat was getting closer to Baie-Comeau.

Not only that, around the west point of Anticosti Island, two separate groups of three humpback whales were spotted near Banc Parent during an aerial flight. These 45-feet (approximately 14-metre) giants feed in the productive waters of the St. Lawrence after travelling up here from their breeding grounds. The purpose of the flight was to survey the presence of right whales in specific maritime lanes. If a right whale is spotted in the lane, a temporary speed limit of 10 knots is applied. Nevertheless, none were seen that day.

The Group for Research and Education on Marine Mammals (GREMM) was also asked if they knew the fin whale that was spotted in Franquelin on Monday by an observer. The individual’s dorsal fin was crooked. However, without any photographs, it could not be identified since a lot of fin whales have crooked fins. In order to positively identify an animal, photo-identification specialists use at least five distinct characteristics: scars, shape, pigmentation, distance between two marks, etc.