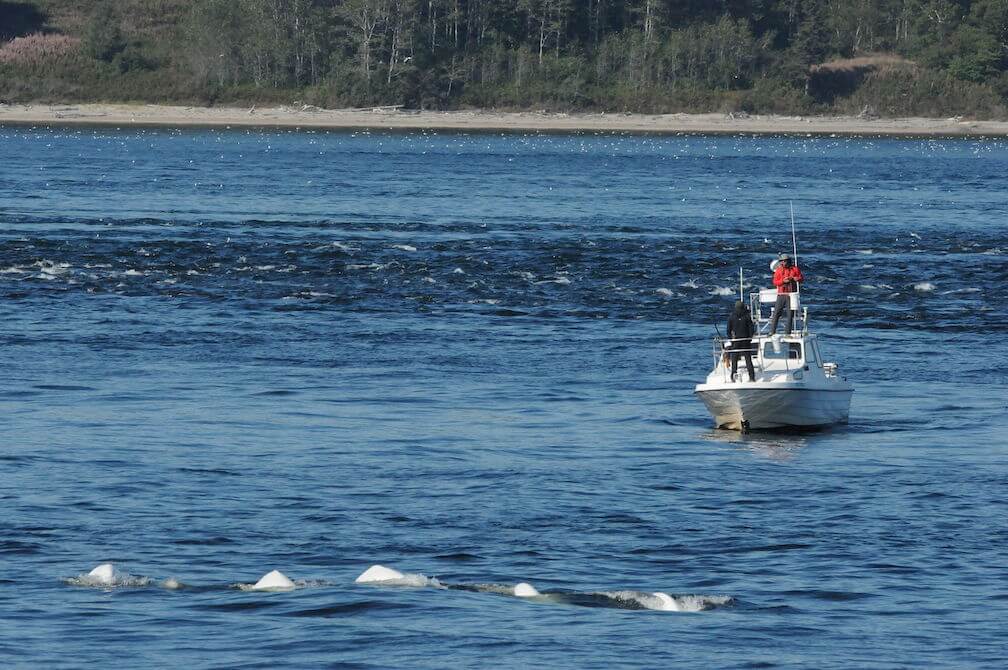 Scientific research can cause inconveniences to individual animals, but can also provide long-term gains for the species at large. © GREMM

Better understanding cetaceans to better protect them is the goal of many researchers working on these giants of the seas. However, some methods such as biopsies or tagging are intrusive and can disturb the individuals under study. Disturbing whales to better understand them, in order to subsequently disturb them less: how do we reconcile this paradox?

GREMM’s scientific director Robert Michaud explains: “The acceptability of a given study is notably based on our ability to answer the following question: Are the positive effects of this research on the target species significant compared to the disturbance caused by its protocol? This issue is also submitted to animal protection and ethics committees, Parks Canada, and Fisheries and Oceans Canada, which issue scientific research permits.

The process can be complex, as one must evaluate numerous variables for which it is not always easy to identify a weighting method. For example, to what degree is the transient pain sustained by the individual more important than noise-related disturbance to its species? Questions become all the more complex when it comes to studying an endangered population.

Let’s look at a few concrete examples. It is suspected that the immune system of juvenile belugas is affected by the contaminants to which they are exposed. This may explain why young belugas die of viral or bacterial infections more than what would be expected in a healthy population. To test this hypothesis, researchers would have to take blood samples that would require temporarily capturing belugas. This is possible, but it involves significant risks. Researchers believe that the answers that might be provided by such a project are not likely to have a sufficiently direct, positive, or significant impact to offset the risks of capture. Additionally, in this case, the principle of precaution can be invoked and the recommendation is to continue decontamination efforts to promote beluga recovery and the survival of juveniles.

In 2015, another project undergoes critical evaluation. The ravages of climate change have led to a sharp decline in ice cover in the Gulf of St. Lawrence. The scientific community suspects that this has also modified the beluga’s winter distribution. To better understand the changes in beluga habits and to determine whether such changes expose them to new risks, researchers are interested in tracking belugas in their fall migration by placing satellite tags on their backs. The tags must be attached with small crampons that pierce the skin. This technique has been used with several species of small cetaceans and has produced very encouraging results. Unfortunately, the technique comes with a risk of infection. In this case, it is considered that the potential benefits for beluga conservation are significant enough to counterbalance the risks. GREMM and Fisheries and Oceans Canada researchers are licensed to place six tags, but only on adult males as a pilot project. In the end, results are so disappointing that the project is suspended. However, it could be re-assessed if available technology were to promise better results with less risk.

A third and final example… For two years now, Fisheries and Oceans Canada researchers have been tagging belugas, this time with suction cups, to measure their exposure to ship noise and assess the impact thereof. This project was also evaluated before issuing a scientific research permit. In this case, the level of disturbance caused by repeated approaches for the tagging operation and the low impact of the tagging procedure itself were considered acceptable in light of the value of the knowledge that would be acquired. The results could be used to inform managers of the protective measures needed to mitigate noise impacts on belugas. In a project like this, researchers must also demonstrate that there are no better alternatives for gathering the desired information. 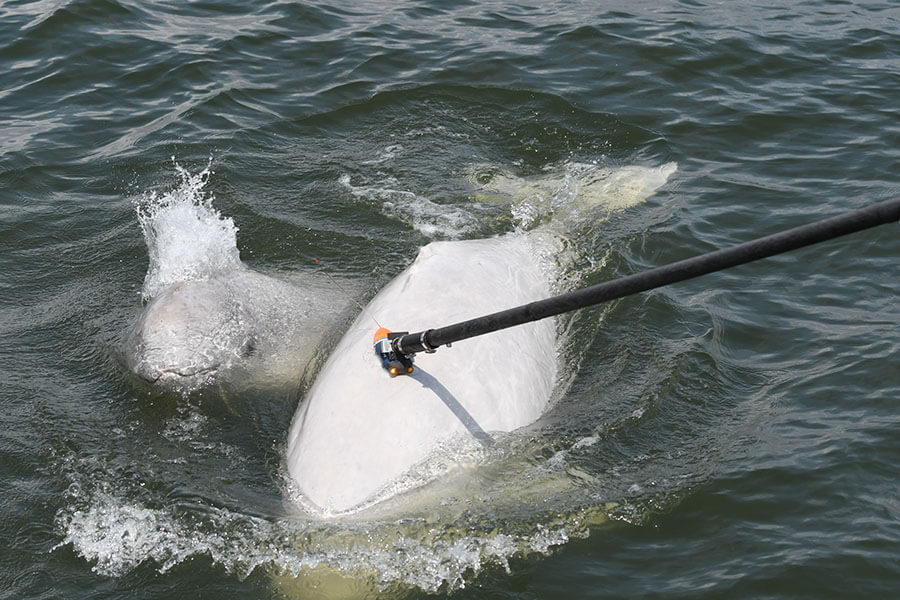 The inconvenience caused by the boat approaching and tagging was considered acceptable, especially considering the value of the data acquired to protect these animals. © GREMM

These examples shed light on the magnitude of the task for those responsible for assessing the acceptability of a protocol that concerns cetaceans. The results of the disturbance studies, combined with the development of new observation and sampling tools such as drones, make it possible to increasingly limit the impact of research work without constraining it or compromising the results obtained. On the other hand, members of the scientific community are not the only ones to study the positive and negative impacts of their actions. Many activities that affect the living environment of these animals often undergo the same process of reflection. This is particularly the case for offshore whale-watching activities, which we will discuss in a future article.