Amphibious Mammals along the North Shore 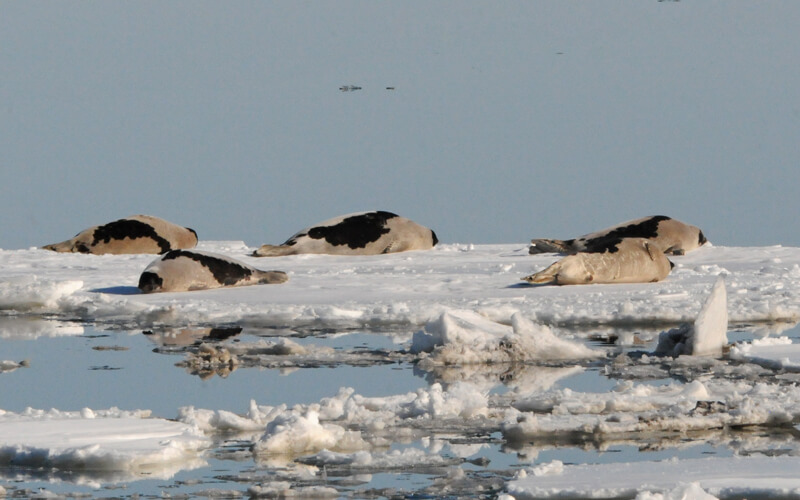 The lives of seals are split between the sea and the land. Excellent swimmers, they hunt their prey under water with ease. They are built to purpose: streamlined body, webbed feet, absence of external appendages. On land or on the pack ice, seals rest, reproduce and give birth.

This week, harp seals by the hundreds are seen off Franquelin and Sept-Îles and a few individuals are encountered on the rocks in Les Escoumins. It is quite normal to see this species in such high numbers in the Estuary in winter. They arrive in the fall to feed in the St. Lawrence and stay there until spring, at which time they make their way back to the Far North. In February, they temporarily leave the Estuary to give birth to pups on the pack ice off the Magdalen Islands. It’s not surprising that part of their scientific name, Pagophilus, translates as “ice lover”!

Experienced freedivers, harp seals generally dive to depths of 100 m, but can reach depths of up to 400 m and can travel great distances under the ice to reach their next breathing hole. Seal blood – like whale blood for that matter – is rich in oxygen-carrying red blood cells. Thanks to myoglobin, a hemoglobin-like molecule that transports and stores oxygen in their muscles, they can stay underwater for extended periods.

On the north shore of the Gaspé Peninsula, one contributor points out the absence of marine mammals in the area this past week, but emphasizes “there’s ice from shore to shore”. Lastly, in Les Escoumins, it wasn’t chunks of ice spotted drifting with the current, but rather eight belugas.