A Week of Questions and Surprises! 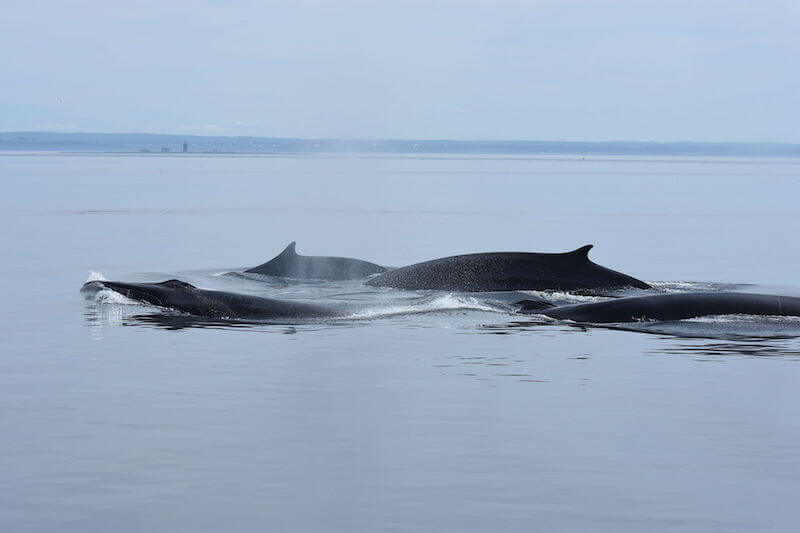 On August 9, the Mingan Island Cetacean Study (MICS) team sets out on the water, taking advantage of a lull. The day is a productive one: the crew encounters three fin whales near the western tip of Anticosti Island and ten more between Magpie and Rivière-Saint-Jean, not to mention two minke whales and four humpbacks. The fin whales are scattered. “They were probably feeding on krill,” says MICS researcher and founder Richard Sears. The type of prey influences their hunting behaviour.. When pursuing krill, which moves along with the currents, fin whales are more solitary, as their meals are easier to capture. Conversely, when they’re hunting fast-swimming fish such as capelin or sand lance, they are more clustered. The cycle of the tides also plays a role. A study carried out in the 1990s shows that, at high tide, fin whales form tight groups in the tide rips, swimming synchronously and dynamically, while at low tide they are rather dispersed and calm. For example, the scattered fin whales in the Mingan region were probably hunting krill, while the nine fin whales in the Gaspé Bay on August 9 might have been chasing fish.

The MICS team also took note of red feces. This colour is explained by a diet composed primarily of krill, a crustacean belonging to the shrimp family. Excrement produced after consuming fish is generally more brownish in colour. Whale feces is of interest to scientists, as it can shed light on the diets of these animals, or be used to gather DNA and even hormones that can serve to determine whether the whales were pregnant with or nursing an offspring.

One of the fin whales observed in the Mingan region this week had been in Sept-Îles a few days earlier. It was recognized by its unusual pigmentation – light-coloured spots on its right side, reminiscent of the appearance of the blue whale – which intrigues the MICS team. Could it be a hybrid (article in French)?

Hybrid observations in cetaceans are mostly reported in dolphins in captivity. In nature, the majority of references come from commercial whaling. Amongst baleen whales, it is mainly blue whale / fin whale hybrids that have been identified. About ten cases have been recorded to date in the North Atlantic. However, it is impossible to conclude that a whale is a hybrid without conducting genetic analysis. As it turns out, this fin whale was sampled by MICS on August 9! Thanks to a tiny piece of skin, the identity of this peculiar animal will eventually be unveiled.

Speaking of exciting results from genetic analysis, the MICS team learned this week the exact age of Tic Tac Toe: this female is celebrating her 20th birthday this year. Today, she is in the company of her third calf, once again in the Mingan region.

In Gaspé, six humpbacks are noted, while in the Estuary, the humpback Gaspar arrives as Siam appears to be leaving the area. In Sept-Îles, three humpback whales are seen in the bay on August 10.

In the mouth of the Saguenay, the presence of several harbour porpoises sparks the curiosity of observers. Are they hunting the same prey as the minke whales? Perhaps. Harbour porpoises feed on fish (capelin, herring, pollock, mackerel) and marine organisms living on the seabed (squid and crustaceans). When they swim, in our jargon we say that they are “porpoising”, meaning they accelerate beneath the surface before leaping out of the water to benefit from the lower air resistance, which enables them to swim faster while saving energy.

The term “porpoising” was used by one of our employees in Pointe-des-Monts this week when he discovered schools of striped bass. The movements of the fish reminded him of swimming porpoises. He could see the two distinct dorsal fins of the fish, the first of which features several spines. Another fish observation: a Blanc-Sablon resident captured with her drone the image of a humpback near an imposing bluefin tuna. These fish are huge, weighing up to half a tonne and are powerful swimmers, cable of reaching speeds of up to 30 km/h. The St. Lawrence is their feeding ground and for the winter they will head to the Gulf of Mexico to breed.