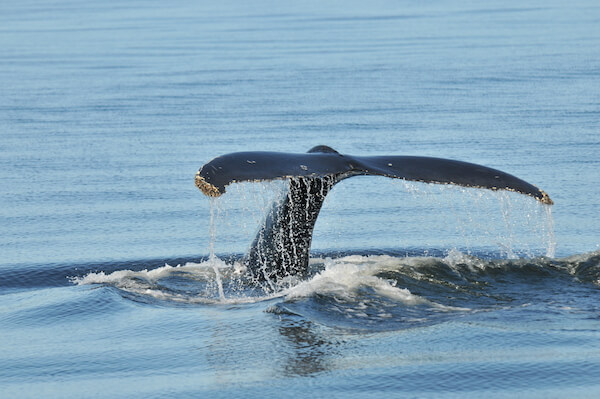 On February 4, a resident in the Godbout region on the North Shore captures on film the tail of a humpback whale. He sends this photo to the Group for Research and Education on Marine Mammals (GREMM) team in the hope that the individual might be “unmasked”, as the tails of humpbacks are not only their means of locomotion, but also their “face”. The photo passes from the GREMM team to the Mingan Island Cetacean Study (MICS), which manages the catalogue of St. Lawrence humpbacks, but to no avail; the giant’s identity remains a mystery.

Recognizing whales consists of meticulously scrutinizing photos taken under ideal conditions. This is called photo-identification. Photos are carefully analyzed, compared to those of several individuals and then matched according to a set of rigorous criteria. One of the individual “signatures” of humpback whales is the black-and-white colour pattern on the underside of their tail. In blue whales, the skin is a unique mosaic composed of various shades of blue. For other species, distinctions are more subtle and may include the shape of the dorsal fin, marbling, skin imperfections, scarring and deformities. Computers can be useful for accelerating and facilitating photo processing, but in the end, it’s always the human eye that has the final word! Over the years, this exercise has become second nature for researchers. At sea, they instantly recognize many individuals, who are like old companions to them. The humpback seen recently in Godbout may be a newcomer. A MICS researcher suggests that it may be a young individual.

Elsewhere in the St. Lawrence, it’s mainly harp seals that have been grabbing the attention of our collaborators: sometimes in small groups in the water, as in Franquelin, sometimes by the hundreds on the pack ice, as in Sept-Îles.