A head, a Tail, a Body Out of the Water! 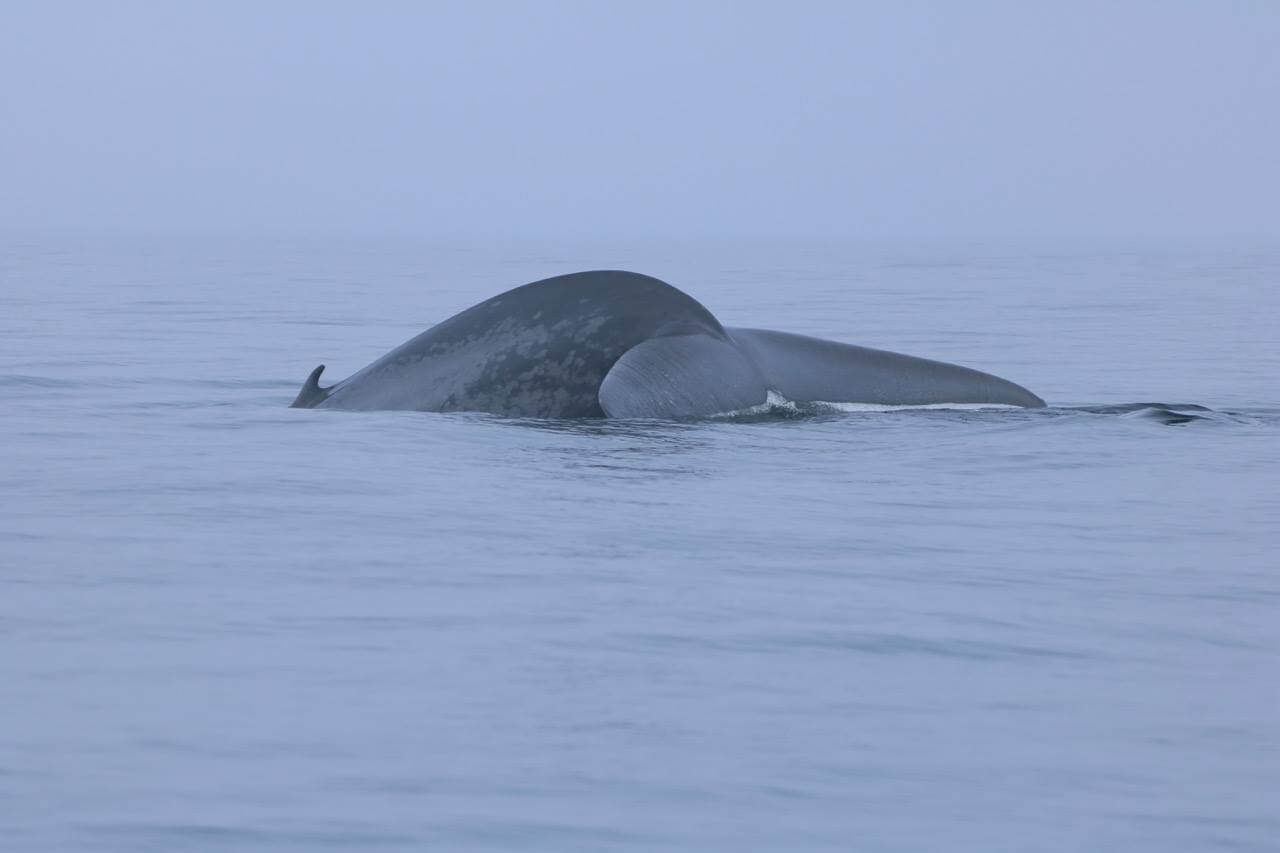 July 31: A pointed snout pierces the surface and rises like a skyscraper out of the waters off Les Bergeronnes. The fin whale observes the whale-watching boat parked a few hundred metres away. Scientists refer to this as “spyhopping”, a behaviour that allows the animal to lift its eyes out of the water and observe its surroundings. This time, it was the observers on board the whale-watching boats that were being observed.

On August 3, off the coast of Percé, it’s a great day for basking sharks! At least two sharks, if not three, were swimming between Percé Rock and Bonaventure Island. One of them has a dorsal fin nearly 1 metre high.

In Baie-des-Sables, on August 4 around cocktail hour, four minke whales break the stillness of the river. The same day, in Percé, the waters are also calm, with visibility of over 1.5 nautical miles toward the open sea. Fifteen or so minke whales are actively feeding, performing rolls and breaches amidst a frenzy of murres and razorbills! Another exceptional observation: a leatherback sea turtle – the largest of all turtle species – is seen near the Bonaventure Island bird colonies!

On August 5, the crowd of observers posted on the rocks of the Paradis Marin campground in Les Bergeronnes is visibly delighted. Just a few metres away, a humpback whale performs a spectacular breach! Only a quarter of the left lobe of its tail remains submerged before its massive body falls into the water. A number of hypotheses have been put forward to attempt to explain the purpose of breaches: demonstration of aggressiveness, long-distance communication, development of muscular capacity, ridding of parasites, hunting technique … In the background are also a host of seabirds, harbour porpoises and a minke whale. We would have loved to know what all these animals were feeding on!

Another humpback was also seen breaching, this time in the Bay of Sept-Îles on August 3. Under the animal’s throat, many barnacles could be seen. These small crustaceans tend to fall off after prolonged contact with cold water. Is it a recently arrived animal from the warm seas of the South?

On August 5, in the Basse-Côte-Nord region (Lower North Shore), a group of killer whales was filmed off Lourdes-de-Blanc-Sablon and Harrington Harbour.

Killer whales in the waters of the St. Lawrence are rather rare. These individuals probably belong to the Northwest Atlantic and Eastern Arctic population.

Also on August 5, off the coast of Matane, our collaborator René Roy is treated to another exceptional spectacle. He photo-identifies no fewer than 8 blue whales that day! On August 9, at the time of writing, one of the research assistants for the Group for Research and Education on Marine Mammals (GREMM) photographs two blue whales off the dunes of Tadoussac. Did they come from Matane? Photo-identification work is in progress!

Lastly, at the Mingan Island Cetacean Study (MICS), observations are coming in by the droves. On August 8, researcher Christian Ramp reports having observed 30 humpbacks and about 20 fin whales 40 nautical miles off Longue-Pointe-de-Mingan, all of which were in rough seas. Which individuals will be recognized from this outing? Photo analysis is due to begin shortly.

Legend for the turtles