A Forest of Spouts 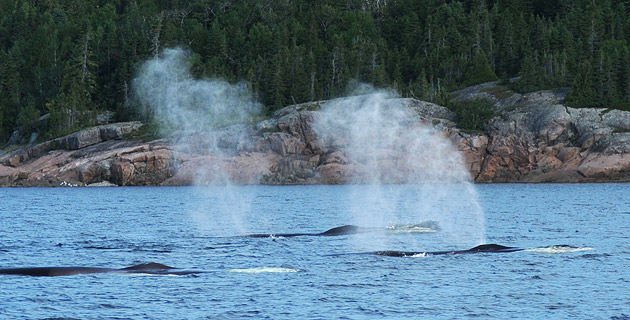 On September 23, no sooner does the cruise begin when the captain yells out “Breach!” Off Les Bergeronnes, the 15-metre long body of a humpback crashes with a loud splash on the water surface. The excitement can be heard on board as the Zodiac approaches the scene: the whale breaches again, once, twice… six times! Then, in a few seconds, the boat is surrounded by the horse-like heads of grey seals. Then the spouts begin to appear, some as close as 100 metres and others nearly 1 kilometre away. “It’s like a forest of spouts,” exclaims one passenger as she loses count of the blows all around the boat. Fin whales and humpbacks breathing in every direction, pectoral fins slapping the surface, bodies and heads poking out of the water and glistening in the oblique sunlight of late September. “The most amazing cruise of 2018!,” exclaims the captain.

Could the storm and its strong winds over the past few days have played a role in this concentration of whales, seals and birds? It’s possible. Wind stirs up waves and can alter the concentrations of whales’ prey by modifying surface currents.

In the Gaspé Peninsula, gusts of up to 120 km/h were reported. Thanks to the powerful muscles of their blowholes, whales can fill their lungs in a single second and can thus continue to breath in storms and waves. On September 24, in Percé, the wind finally calmed down and the sea regained its bluish tint. A tall spout erupts from the water about 3 nautical miles north-northeast of the gannet colony. In Gaspé Bay, about half of the cruises scheduled were cancelled on account of strong winds. Nevertheless, minke whales were observed surface feeding in the past few days, not to mention two humpbacks, two fin whales, a blue whale, and fifty or so harbour porpoises. On Sunday, a hundred or so white-sided dolphins made a noteworthy appearance.

In Baie-Comeau, a minke whale attracts the attention of residents on September 23. Another minke whale and a small group of humpbacks were seen feeding off the coast of Franquelin. One observer exclaims “Large spouts are more often seen farther offshore.”

On September 25, the Mingan Island Cetacean Study team witnesses spectacular scenes of a group of about 20 minke whales surface feeding.