A Breath of Spring 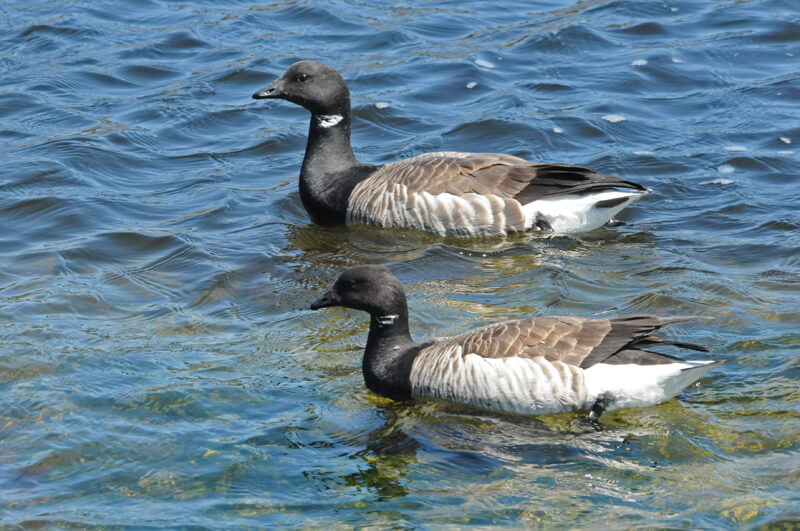 March 20 marked the spring equinox, when day and night are of equal duration, and will end with the summer solstice, which corresponds to the longest day. These lovely spring days, with their radiant sunshine and mild temperatures, inspired several observers to scan the shores of the St. Lawrence last weekend in search of signs of life offshore… on the ice, and in the air!

On March 21 at Cap de Bon-Désir near Les Bergeronnes, a hundred or so harp seals are gathered on the ice. Two belugas are also spotted. A collaborator films the scene and describes this moment of “tranquillity” in his most recent Field Notes (link). And what could be more eloquent than the arrival of brant to announce the return of spring? This small goose of the coasts lacks the white cheek of the Canada goose. The adult is characterized by an inconspicuous white neck patch with black stripes. This bird is returning from the US east coast and will migrate to the Arctic, where it will nest this summer.

The mouth of the Saguenay River has become the scene of piles of ice following spring icebreaking operations in the Fjord. Carried out by the Canadian Coast Guard, this annual activity aims to clear ice from the rivers to prevent ice jams and floods. The remaining waters of the Estuary are generally open and the Canadian Ice Service predicts that the situation will remain essentially the same in the days to come.

In the Gulf, ice is more abundant, though its concentration and thickness vary depending on the sector. At Sainte-Thérèse-de-Gaspé, the shoreline is still frozen. “Ice and more ice,” says one resident, “but here it is not too solid,” he cautions. Another observer reports a rumour of two humpback whales near Gaspé Bay on March 22. The Whales Online team hopes to learn more!

In Cap-Chat, one of our collaborators takes advantage of the warmer temperatures to put his kayak in the water and zigzag through the maze of ice stretching out in front of his home. “I was hoping to hear a spout. I would’ve even settled for a porpoise!” he writes. Even if there’s no sign of marine mammals that day, there is still life in the air! Mallards and hooded mergansers, as well as black-backed and Iceland gulls are all noted.

On the other side of the St. Lawrence, in Port-Cartier, the giant of giants is spotted on March 18: a blue whale is near Îles de Mai.

And that’s just the beginning! As spring sets in, the “traffic” of migratory species will gather pace in the St. Lawrence!