A Breath of Fresh Air in Gaspésie 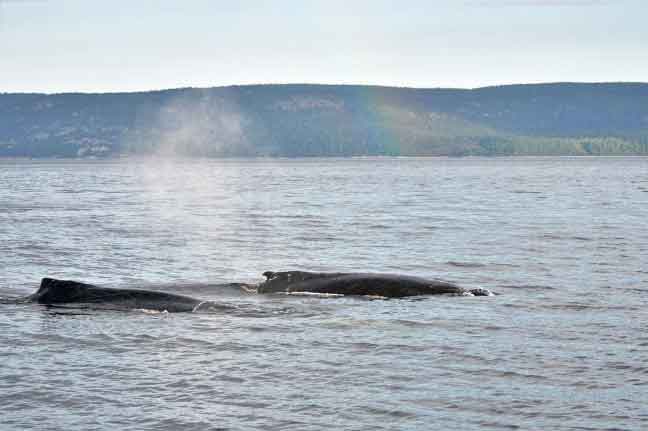 Good news: five newborn humpback whales have been sighted so far off the Gaspé Peninsula: “a figure that is already higher than last summer,” points out a researcher from the Mingan Island Cetacean Study (MICS). A few mothers are identified: Tingley, Bad Chemistry, La Souffleuse – also known as – and Irisept, a first observation with a newborn in 20 years of encounters! The MICS team has also captured superb images of the pair by drone, where one can also see the tracking tag on Irisept’s back. This female is the 8th humpback to be tracked underwater thanks to a tag secured with suction cups.

Even though they are weaned between the ages of 6 and 10 months, young humpback whales stay with their mothers for a year or even two to acquire basic hunting skills, discover migratory routes and learn other elements essential to their survival. This maternal care is the longest of any of the baleen whales. In the Estuary, Tic Tac Toe is recognized on June 23. At times she is accompanied by a small individual. Is it her calf? Or an independent juvenile who joins her on occasion? We still do not know.

Still in the Gaspé, a dozen humpbacks are observed – particularly west of Rivière-au-Renard – as well as a few fin whales and a blue whale near Gaspé Bay. “We’ve been encountering a trio of large rorquals nearly every day,” says a whale-watching guide with reference to his observations of humpbacks, fin whales and blue whales. In Sept-Îles, two humpbacks and two fin whales are spotted.

In the jargon of those who work with cetaceans, the minke whale is not included in the “large rorqual” category. However, its size is nothing to balk at. It measures 6 to 9 m long – the length of a limousine – and tips the scales at 7 to 10 tonnes, which is equivalent to the weight of two elephants. On June 27, observers at Pointe de l’Islet and the Pointe-Noire Interpretation and Observation Centre (Parks Canada) study ten or so minke whales at the mouth of the Saguenay River. Nearby are several groups of belugas.

In the Gulf of St. Lawrence, specifically at American Bank, researchers from Fisheries and Oceans Canada cross paths with three humpbacks and a few fin whales. A team from the National Oceanic and Atmospheric Administration (NOAA), in the course of an aerial survey in search of right whale carcasses, tallied 14 right whales – living this time – on June 26. The crew even spots a great white shark devouring one of the dead right whales.

Speaking of this predator of the seas, another great white closely follows the watercraft of two young rowers – one from Quebec, the other from Ireland – shortly after they set out on their journey across the Atlantic, on June 24, east of Newfoundland’s Grands Banks. The mission of the project is to raise public awareness on the health of the oceans and its inhabitants.

Just like a number of whales, the great white shark of the Atlantic is on the endangered species list. Man is its main predator. Great whites are prized by sport fishermen, and are caught accidentally by commercial operations. However, in Atlantic Canada, shark regulations prohibit sport fishers from keeping any sharks they catch, with the exception of spiny dogfish. It is one of seven shark species found in the St. Lawrence.