A Blue Whale At Last! 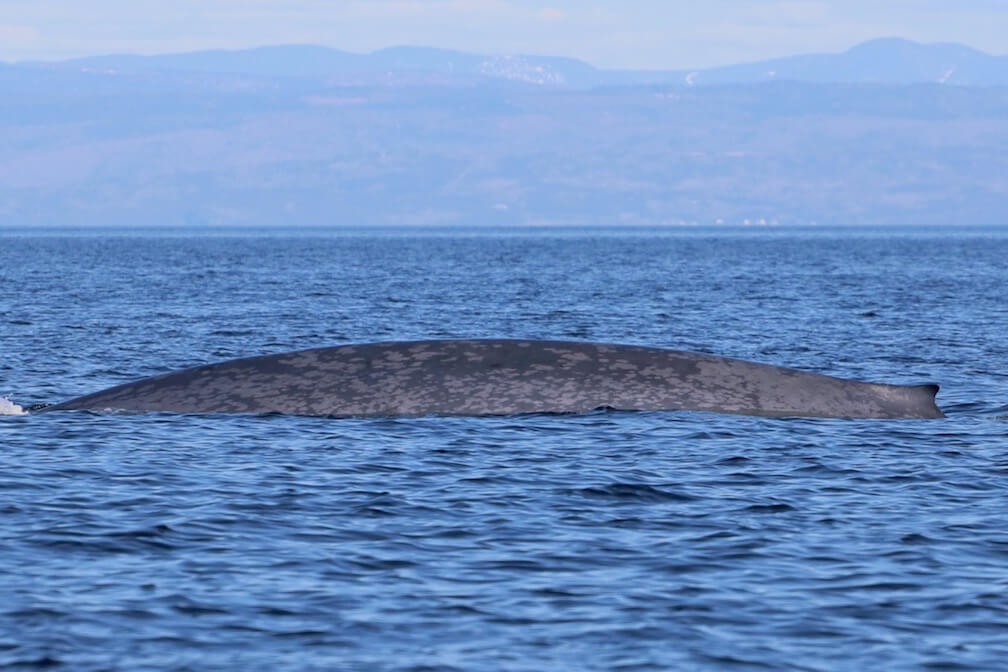 I finally encountered my first large rorqual of the season! And it was about time: I had already travelled 240 nautical miles (about 445 km) in the span of three outings. On Thursday, May 23, I made yet another 95 nautical mile-loop between Matane, Grosses-Roches, Pointe-des-Monts and Franquelin. It was on my way back, 14 nautical miles off Matane, that I saw a large spout “at 10 o’clock”, as they say in sailor lingo, or almost 90° to my left. What luck, as I spotted it off to the side at a distance of about 2 nautical miles.

Judging by the height of the spout, I knew it was a blue whale. I was so afraid it would dodge the lens of my camera after having gotten my hopes up so much. Because I don’t watch blue whales just for kicks! I do photo-identification work for the Mingan Island Cetacean Study (MICS). I gazed at the horizon while maintaining an approximate course and using a boat that was more or less in the same direction as a reference point. When I finally saw the large spout, though still a ways off, I was quite relieved and sure I would be able to draw closer. I was now able to better estimate its position as well as its speed and direction.

It was moving from southwest to northeast at 4.5 knots. Consequently, I was able to take pictures from the animal’s left side during its fourth breathing sequence and from the right side during the fifth, all while keeping up with its cruising speed. It was surfacing every 8 minutes and was not very generous in its number of breaths (3 or 4), which didn’t do much for my cause.

My first photos were good enough for an ID, but not to add to the MICS catalogue. As I continued to head northeast at 4.5 knots in anticipation of its next breath, it suddenly stopped after the seventh sequence to surface behind me, at exactly the same position as its previous breath. Why did it stop so abruptly? Maybe it found the food it was looking for? Perhaps it was fleeing before it finally realized I was not a threat? There is no way to know.

It mostly remained at this location from that moment on for its subsequent breathing sequences. I was able to take better quality photos while hardly having to move. It had become quite cooperative. Photo-ID mission accomplished, I continued to observe it surface several times all around the boat, just for the pleasure of it.

Back home, I was able to match this individual as B389, which I first encountered on September 7, 2007 and which I had not seen since then.

This foray also allowed me to observe for the first time a minke whale that executed two full breaches off Pointe-des-Monts. The event happened too suddenly and quickly for me to see it coming. Unfortunately, I did not have the time to take any pictures. It is quite spectacular to see this “small” and slender-profiled whale out of the water. I was also able to observe huge numbers of migrating ducks, especially Long-tailed Ducks and all three species of scoters, as well as a few harp seals.

The ice has broken up, as we say, and the season is well underway.