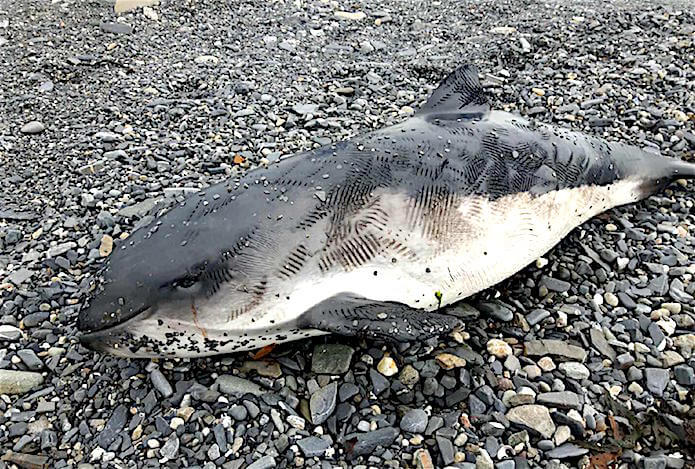 With the beginning of the school year, the crowds of vacationers are thinning out on the shores of the St. Lawrence, but a few hardy individuals are still on the lookout at sea and on land. Marine Mammals Emergencies has handled a variety of interesting cases in the past few weeks.

A harbour porpoise carcass in L’Anse-au-Griffon has sparked strong reactions since Sunday. The small cetacean was so fresh that residents thought it was a plastic whale! But the most striking fact is that it bore scratches all over the body and fins, an observation brought to the attention of Stéphane Lair, veterinary consultant for the Quebec Marine Mammal Emergency Response Network. The photos reminded him of the case of a harbour porpoise found dead in 2009 in Pointe-au-Père, which showed similar marks and which had undergone a complete necropsy.

In a short article published in the journal Aquatic Mammals in 2012, the team from the Université de Montreal’s Faculty of Veterinary Medicine (FMV) explains that the parallel and evenly spaced lacerations observed on the porpoise’s skin are characteristics of the marks made when a whale slides its teeth across the skin of another whale. It has been documented that harbour porpoises are occasional victims of attacks from bottlenose dolphins in Great Britain and white-sided dolphins in California and Washington State. Such interactions between species had never been reported in the Gulf of St. Lawrence or its Estuary prior to the 2009 discovery of the young female porpoise.

Signs of a generalized inflammatory reaction in this harbour porpoise were observed during the necropsy. According to veterinarians, the most plausible hypothesis is that the skin wounds caused by the lacerations resulted in a bacterial infection, and therefore that the mortality of the young porpoise was probably the consequence of an attack from one or more toothed whales.

Is this what happened to the harbour porpoise in L’Anse-au-Griffon this past week? Impossible to know for sure, since the whale quickly fell prey to scavengers once it washed ashore, and the remains of the carcass will not be able to provide scientists with sufficient information. 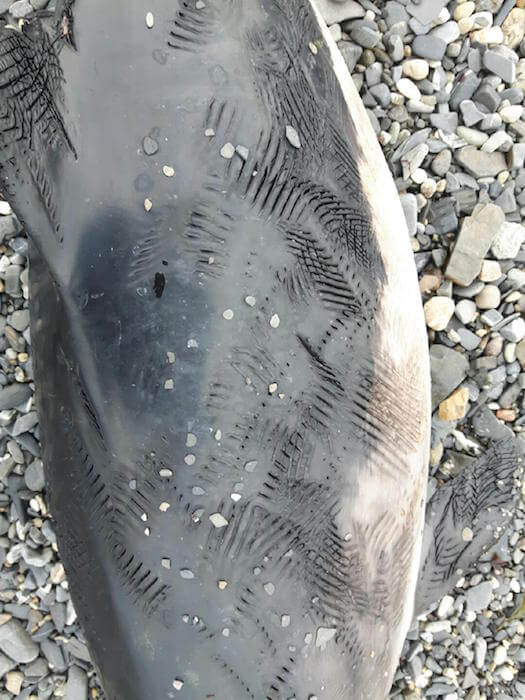 Other noteworthy facts: the presence of another harbour porpoise carcass was confirmed on Tuesday afternoon in Cap-des-Rosiers in the Gaspé Peninsula. It also shows rake marks that are suggestive of dolphin teeth. Observers from the News from Afield network report the presence of thousands of white-sided dolphins in the waters of the Gulf of St. Lawrence, which is an interesting coincidence!

A Marine Mammal Emergencies volunteer showed great vigilance this Saturday when he spotted a white mass with birds perched on top, drifting off Sainte-Flavie in the Bas-Saint-Laurent region. According to him, there was no doubt that it was a beluga carcass being pushed by the current in front of his house. The following day, his initial impressions proved to be true when the carcass finished its course opposite Domaine Bel Azur in Baie-des-Sables.

The beluga carcass recovery expert was dispatched to the scene; the beluga appeared fresh and therefore an excellent candidate for a necropsy at FMV. He quickly sensed that he was dealing with a very large adult male and the field data corroborated this impression: 4.80 metres long and weighing in at about 1.5 tonnes. The carcass underwent a comprehensive necropsy on Tuesday evening at FMV in an effort to shed light on the causes of mortality of this beluga. Stay tuned for further updates! 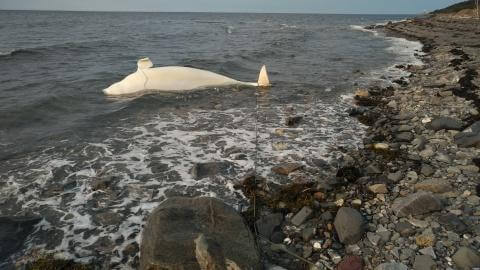 A minke whale was reported adrift the morning of September 6 off Cloridorme in the Gaspé Peninsula before being washed ashore the following day in front of houses in Saint-Maurice-de-l’Échouerie. The fishermen who reported it at sea immediately noticed the conspicuous streaks on the whale’s belly, indicating that it was probably the victim of an entanglement in fishing gear. Did she manage to free herself, or was she left to drift after being found dead ensnared in the ropes? Impossible to know for sure, or to know in what type of gear it got caught in. The carcass was measured and photographed; it was an adult female measuring 7.70 metres long. This situation is a reminder of the importance of reporting any entangled whales, dead or alive, to 1-877-7baleine. 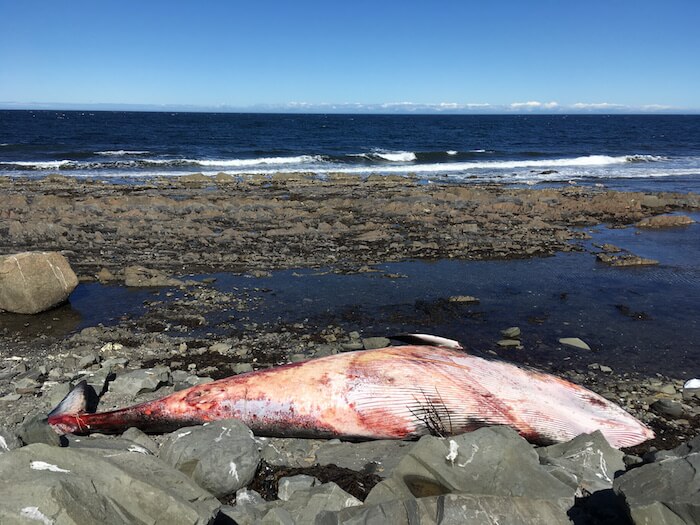 The minke whale had streaks on its belly. © Sarah-Émilie Fournier
Marine Mammal Emergencies - 13/9/2017