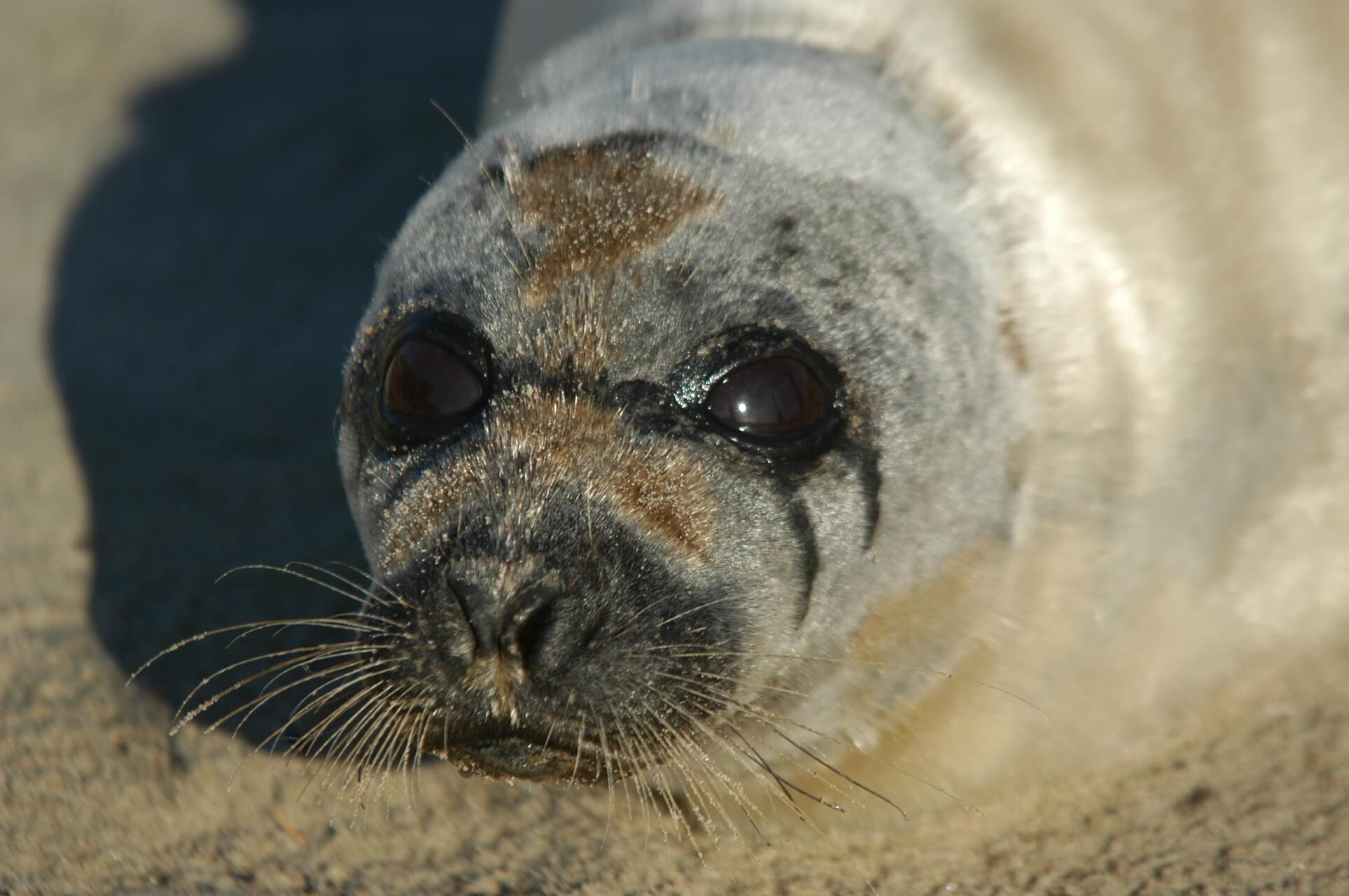 Unlike the majority of marine mammals that are summer visitors to the St. Lawrence, the harp seal inhabits the gulf and estuary in winter. It uses the pack ice for calving, moulting and breeding. Adults show a unique black and white pattern on their back, while newborns are completely white. Harp seals receive considerable media attention due to the hunting of these “whitecoats.”

This is the only species of seal to swim on its back! Its strong attachment to the sea ice makes it rather vulnerable to climate change and melting ice. 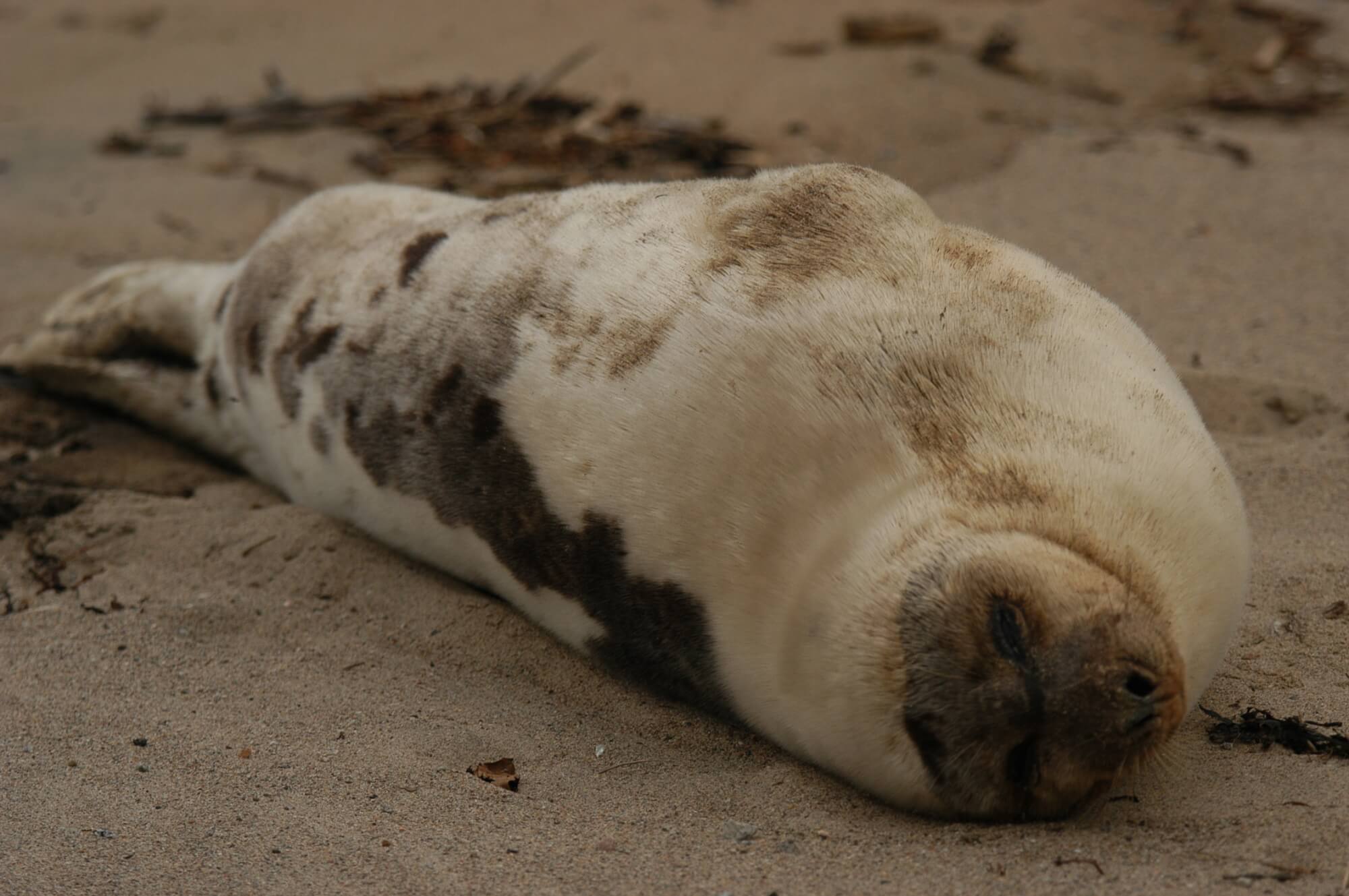 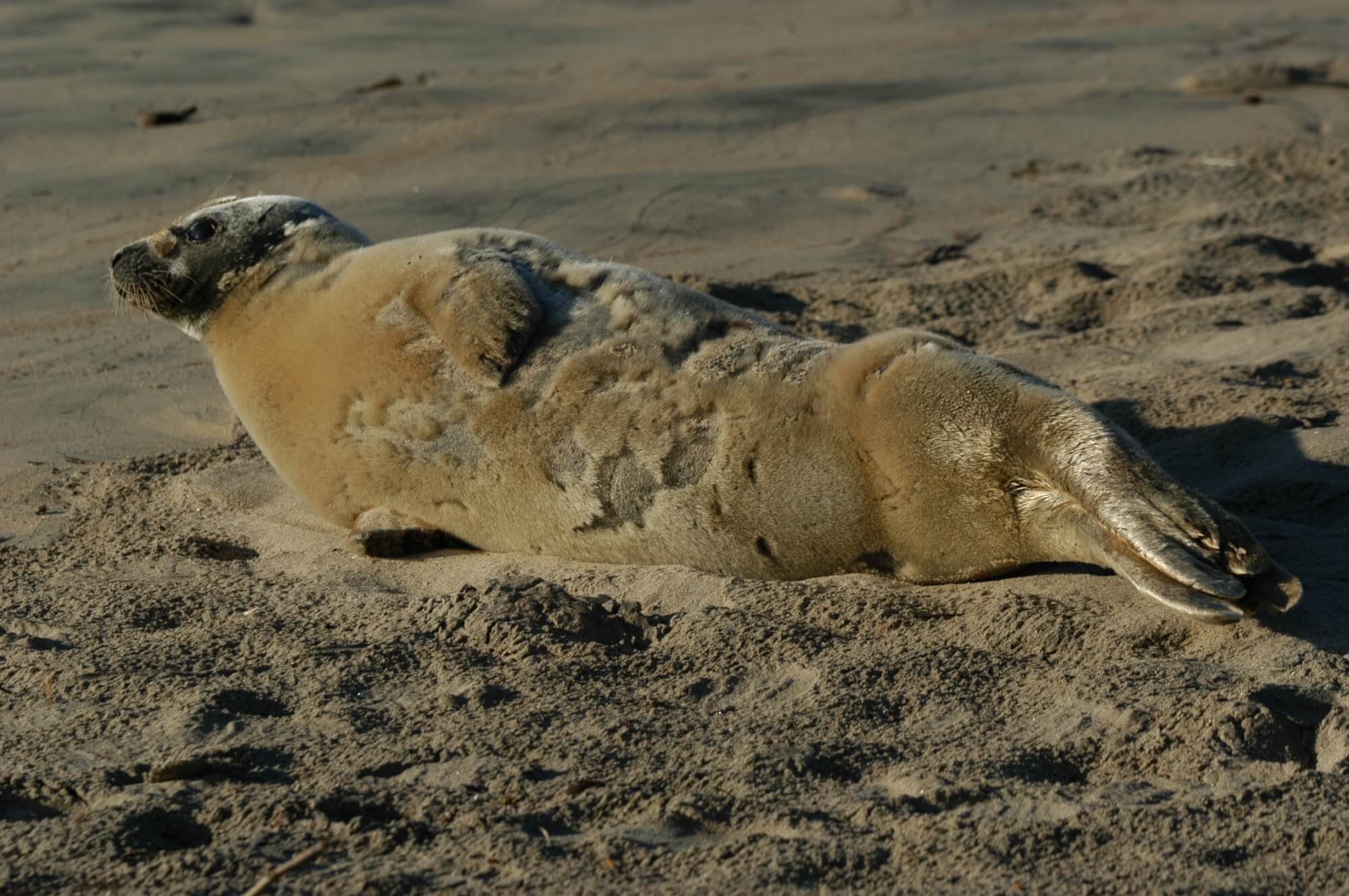 Globally, scientists recognize three distinct populations of harp seals, each differing in morphology, genetics, distribution and behaviour. For example, all harp seals undertake significant migrations as a function of their life cycle (moulting, reproduction, pupping). However, the precise timing of these events may vary from one population to another.

The Northwest Atlantic population is estimated to number 7.4 million individuals. This population – generally considered to be abundant and healthy – is split into three herds, each of which uses a different breeding site. The Gulf herd breeds off the Magdalen Islands in the Gulf of St. Lawrence. The Front herd reproduces off the coasts of southern Labrador and northern Newfoundland. A third herd – the smallest of the three number-wise – is found in the northern parts of the Gulf of St. Lawrence.

The harp seal undertakes an extensive annual migration between its breeding, pupping (also known as whelping), moulting and feeding sites. Migration takes place in groups of several individuals over thousands of kilometres. In the Northwest Atlantic population, harp seals spend the summer months at their feeding grounds in the high seas and in the coastal waters of Greenland and the Canadian Arctic. In fall, the species sets out in search of pack ice for whelping and breeding. In early September, males and females head south toward the waters of northern Newfoundland and southern Labrador as well as the Gulf of St. Lawrence. After the pupping season comes the moulting period, when older individuals head north to moult on the pack ice. Once this stage is completed, they return to their feeding grounds for the summer.

The world’s three populations of harp seals do not interbreed with each other and congregate at different whelping grounds.

In northern Russia, individuals of the Barents/White Sea population breed in the White Sea.

The largest population is the one that inhabits the waters off western Greenland and Eastern Canada. This is the Northwest Atlantic population.

The International Union for Conservation of Nature (IUCN) has designated the global harp seal population as “Least Concern.”

In the Northwest Atlantic, commercial hunting greatly contributed to the decline of the population in the 1960s, which hit a low of 2 million individuals in 1970. The population subsequently increased continuously until it finally stabilized in 1996, though it probably never recovered to its pre-hunting levels. With an estimated 7.4 million individuals, Fisheries and Oceans Canada considers this population to be healthy and abundant.

Though controversial, hunting of this species in Canada continues, primarily in Newfoundland. It is the most commercially important seal species. Newborns are prized for their white fur. The start of the hunting season therefore coincides with the breeding season and continues after the latter has ended.

Current threats to the species include entanglements, habitat degradation, contaminants, climate change, overfishing, hunting, oil exploration and spills, and ship strikes. Climate change is particularly problematic for this species, which requires ice for whelping and pup survival. Unlike other species of seals, giving birth on dry land translates into a certain death for the whitecoat.

Harp seals have a number of predators, including killer whales, sharks, humans and polar bears. They may also fall victim to parasitic infections by any number of species of nematodes. These worms can cause infections in the heart, lungs and digestive system. Although the majority of seals survive these parasitic infections, they can be fatal under certain circumstances. Seals can also fall ill to viral and bacterial infections.

Harp seals are opportunistic predators that hunt for their prey in groups. They feed mainly on fish as well as invertebrates. Analyses of their stomach contents have revealed that they consume a very wide range of species, with 70 species of invertebrates and 67 species of fish having been identified. However, their diet consists mainly of a limited number of species, namely molluscs (squid), crustaceans (shrimp and krill) and fish such as plaice, arctic and Atlantic cod, bullhead, redfish, halibut, capelin, herring and other flatfish.

The harp seal is believed to be the only pinniped to regularly swim on its back. Although scientists do not know the reason for this behaviour, they have raised several hypotheses. The eyes of this species are positioned near the top of its head. When swimming in this position, the animals find themselves completely under water, which allows them to better see the waters below and spot prey, predators or any other source of threat or disturbance. However, scanning the depths does not allow the seal to spot land-roaming predators such as the polar bear.

The harp seal spends much more time swimming and diving than it does on land. Despite being a very agile swimmer, it is probably only a mediocre diver, averaging depths of 400 metres and dive times of approximately 16 minutes. Compared to other seal species, its dives range from shallow to moderately deep. Researchers have observed that in some populations, dive times vary as a function of location, season, and time of day.

Harp seals are highly gregarious, congregating by the thousands on the ice floes for pupping, reproduction and moulting. They also hunt in groups, but these gatherings are not as massive. On the pack ice, multiple animals use the same hole to enter and exit the water, thereby preventing it from freezing shut. The only animals that sometimes live alone are the older bulls. This species spends most of its time in the water and has a unique habit of swimming on its back. On the ice, these seals can be observed lying on their sides or on their bellies.

Scientists have identified 17 different sounds produced by harp seals when they are under water. They have also been known to bark when out of the water.

Both male and female harp seals reach sexual maturity around the age of 4 to 5 years.

After her pup is weaned, the female will mate, sometimes with several males. Mating normally takes place in the water, but may also occur on the pack ice. Bulls compete for mating rights by fighting one another with their front flippers and teeth. If the female’s egg is fertilized, its implantation in the uterus (and thus the continuation of the pregnancy) may be delayed by about 4 months. As a result, the pup may be born 11.8 months after conception, but only 7 months of gestation. The female will also take advantage of this period to feed before beginning to moult on ice floes farther north, which will take place 4 or 5 weeks after she has given birth.

Females must give birth and raise their young (pups) on stable ice, which explains their migration to the pack ice and their gatherings numbering in the thousands. Every year, between late February and mid-March, females give birth to a single pup, which they are able to identify by scent. At birth, the baby seal weighs between 10 and 11 kg, measures 80 to 85 cm long and is not yet protected by a thick layer of fat.

For 12 days, the pup gains about 2.2 kg per day thanks to its mother’s fat-rich milk (57%). By the time it is weaned, the pup weighs between 30 and 45 kg and has developed a 5-centimetre-thick layer of fat. However, the pup may go without eating for 4 to 6 weeks between the time it is weaned and the moment it is ready to take to the water and feed on its own. During this period, it may lose about half its body weight.

Fisheries and Oceans Canada is currently undertaking a number of research projects related to harp seals. These projects aim to expand our knowledge of the species’ habitat use, ecology, diving behaviour, population dynamics, seasonal movements and migratory routes, diet and feeding behaviour. The studies also seek to determine the state of the population, the seal’s role in the ecosystem, the impact of subsistence and commercial hunting, the consequences of anthropogenic activities on the species and the ecosystem. Researchers also study the effects of climate change and oceanographic factors by tracking populations, reproduction, body condition, whelping site locations and pup survival. 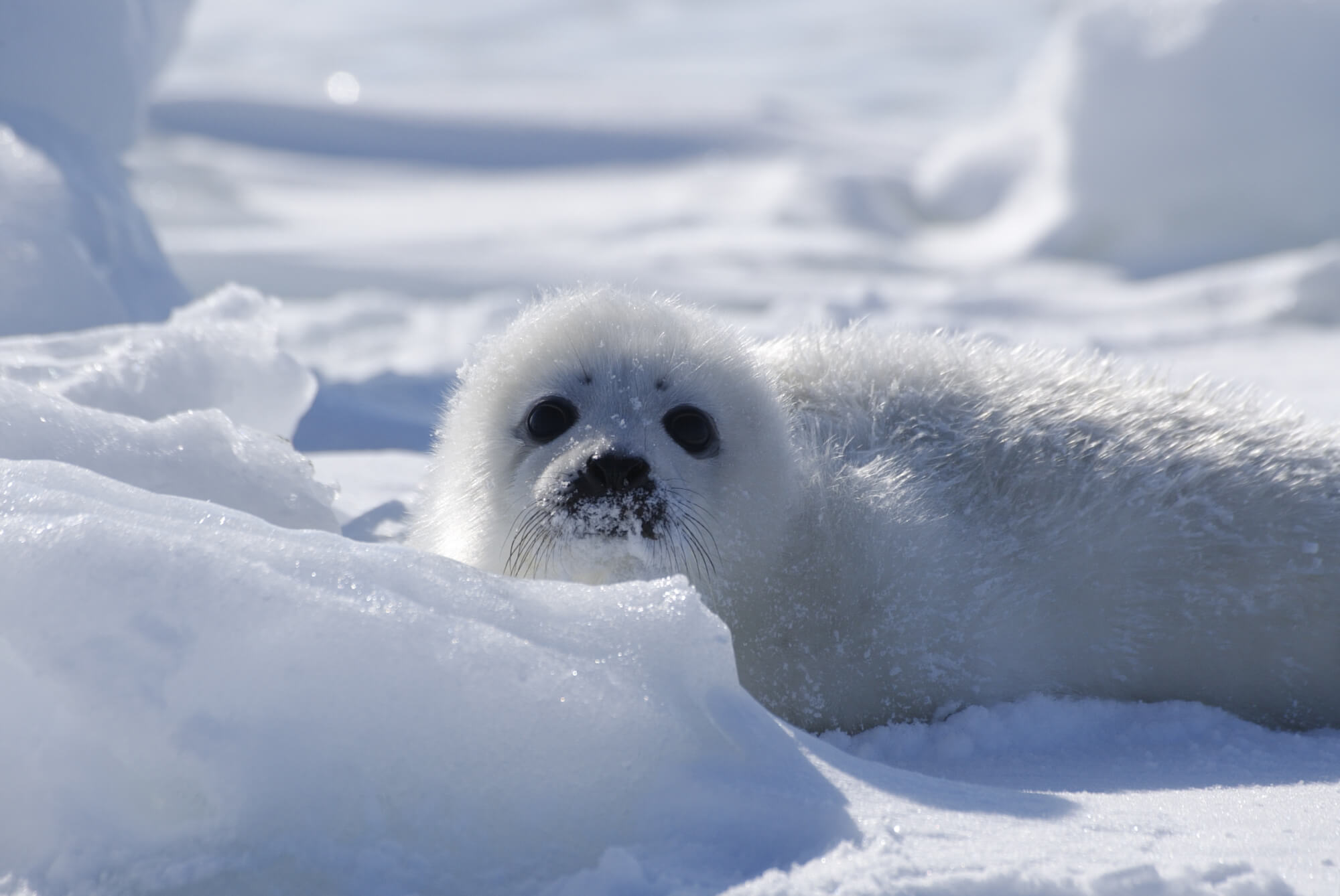 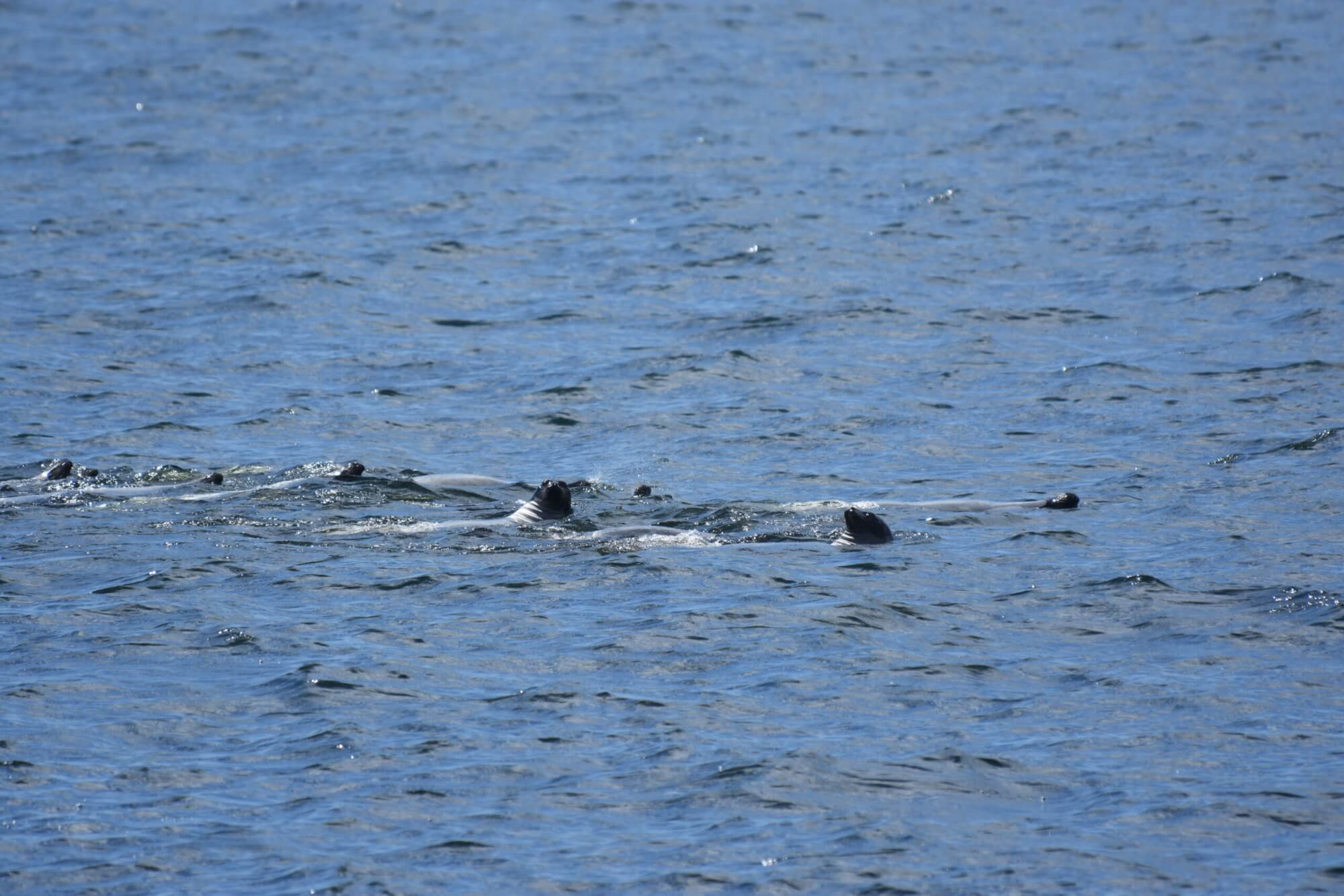 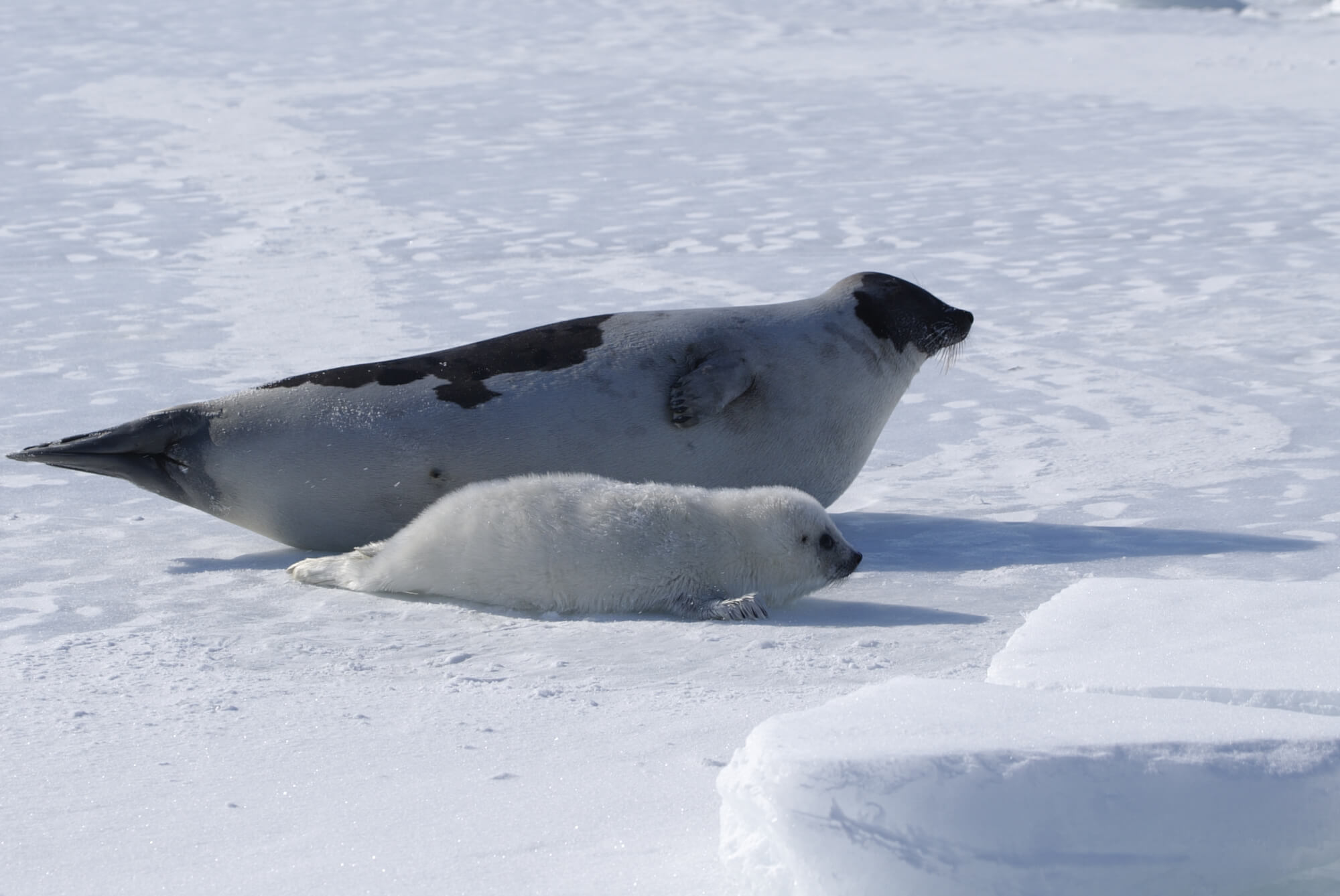