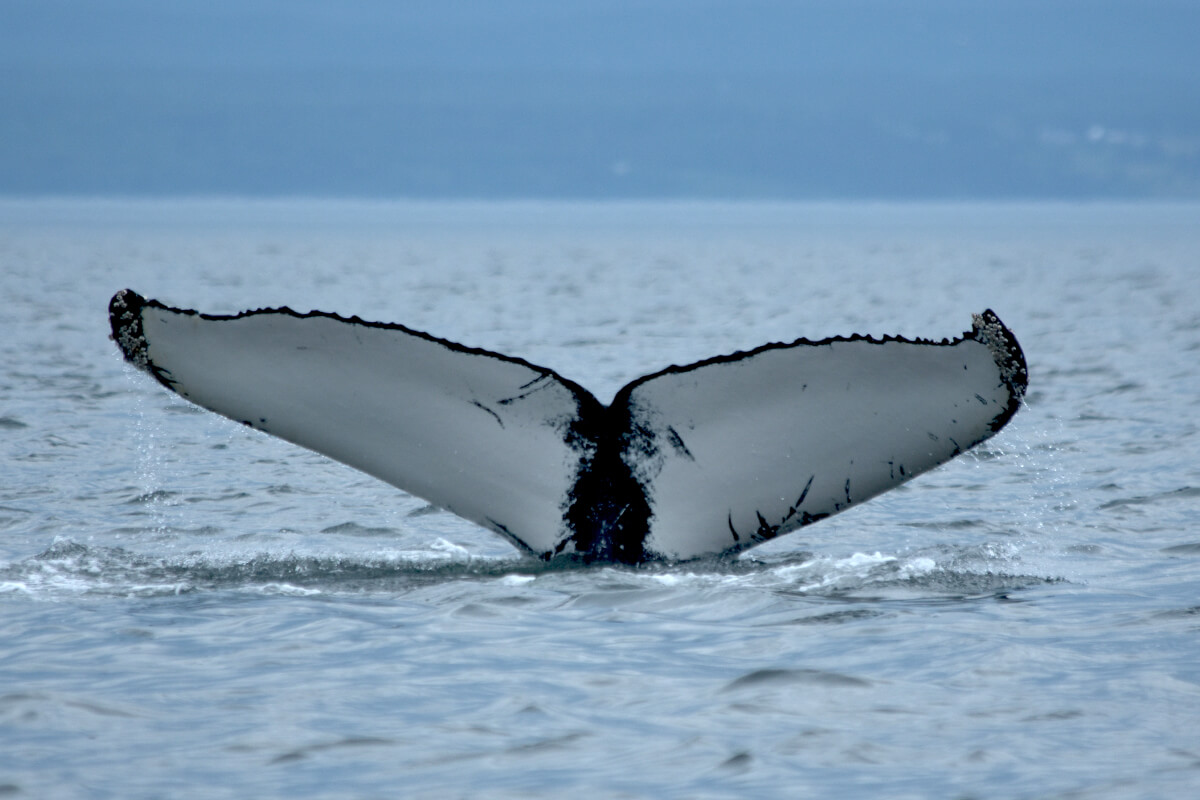 A mostly white tail with three black lines on the left lobe.

In 2017, the Mingan Island Cetacean Study (MICS) photographs a new humpback whale off the Gaspé Peninsula: H887. The following year, GREMM’s team photographs this beautiful, elegant humpback in the Estuary. It then lingers in the area for at least four weeks in August and September. In July 2019, H887 impresses observers with its aerial prowess and surprising behaviours. It was seen rolling on the surface and slapping its pectoral and caudal fins. In 2020, H887 is present once again in the St. Lawrence. For the moment, we know very little about its life or its migrations. To be continued! 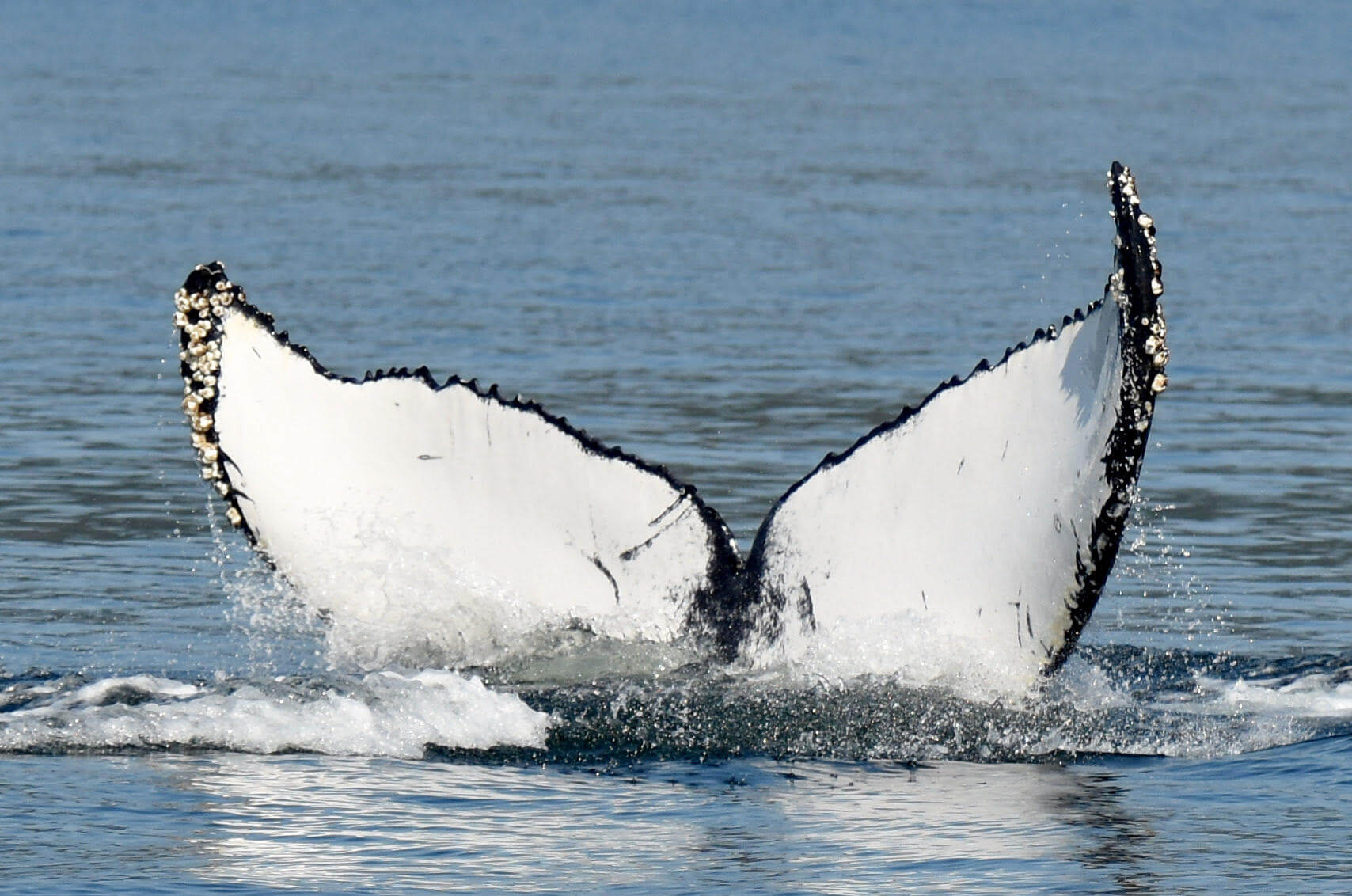 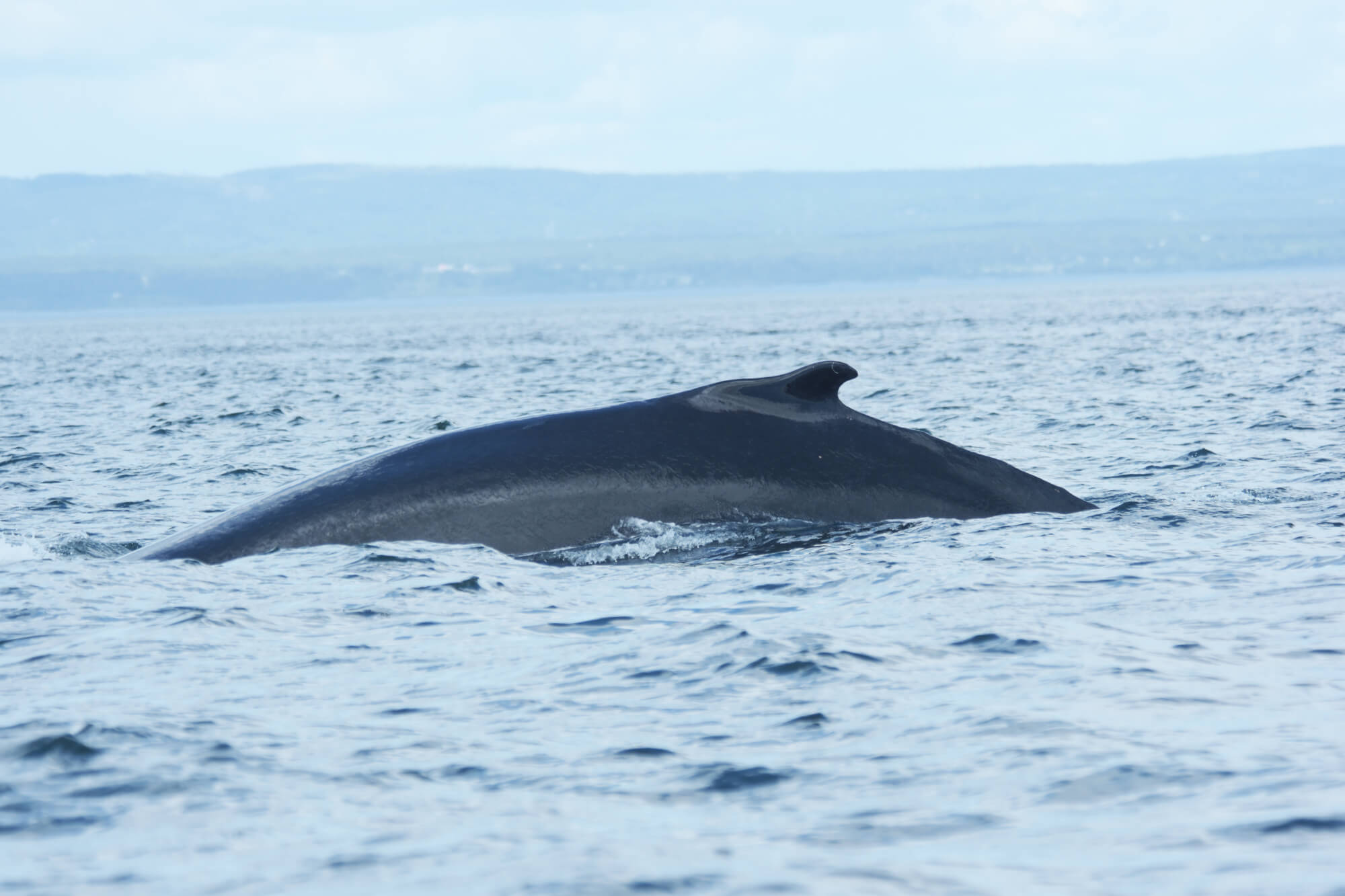 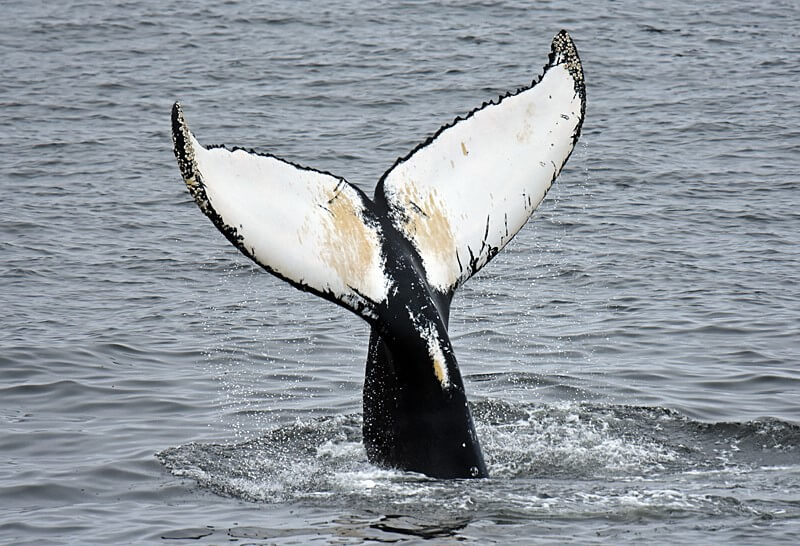 Spotted for its exuberance and antics, the humpback whale H887 has been identified in the estuary for the fourth consecutive year. This year again, strange orange patches adorn its tail. These colorations cannot be used for identification, since they change their arrangement every year: they are diatom colonies.

Diatoms are unicellular algae that proliferate in nutrient-rich waters, such as those of the St. Lawrence, and attach themselves to the skin of cetaceans. Their structural envelope of crystallized silica reflects light, giving whales a golden hue. There are at least 20,000 species of diatoms, adapted to different environments. When a whale leaves cold waters for warm waters, or vice versa, its diatoms detach themselves, not being adapted to the new environment. Some studies even suggest that whales migrate precisely in order to get rid of their parasites! In the Mingan Islands, researchers can recognize whales that have just arrived in the Gulf simply by comparing their grey skin to the gold-tinged skin of individuals that have been present for several weeks. All species of whales can become hosts to diatoms, but they are particularly visible on the white tails of humpback whales.

Among the twenty or so humpback whales currently present in the Estuary, you may have noticed this one. Breaching, swimming on its back, turning over itself, slapping its tail or pectoral fins, H887 is particularly active on the surface. “She’s really special and exuberant. Together with Tic Tac Toe’s calf, she’s the one with the most tricks up her sleeve when we’re observing her,” points out photographer Renaud Pintiaux. Already last year, this same whale had impressed observers with its aerial acrobatics to the point of being nicknamed “queen of antics” by GREMM’s research assistants.

Unfortunately, very little is known about this humpback, not even its age or gender. With its predominantly white tail, H887 can easily be confused with H858, a.k.a. “Queen”, but there is one minor difference in the current photos: H887 features two large gold patches on its tail; these are small parasitic algae called diatoms, which can remain attached for several weeks or even months. First spotted in 2017 off the Gaspé Peninsula, H887 was later the first humpback identified in the St. Lawrence in May 2018 and the last one to leave in October 2019. It therefore seems to enjoy spending time in these prime feeding grounds and on its way to becoming a faithful visitor to the Marine Park.

In 2017, the Mingan Island Cetacean Study (MICS) photographs a new humpback whale off the Gaspé Peninsula: H887. The following year, the GREMM team photographs this beautiful, elegant humpback in the Estuary. It then lingers in the area for at least four weeks in August and September. This year, since early July, H887 has been impressing observers with its aerial prowess and surprising behaviours. It was seen rolling on the surface, slapping its pectoral or caudal fins. Will H887 become a regular visitor to the Estuary or one of its stars?