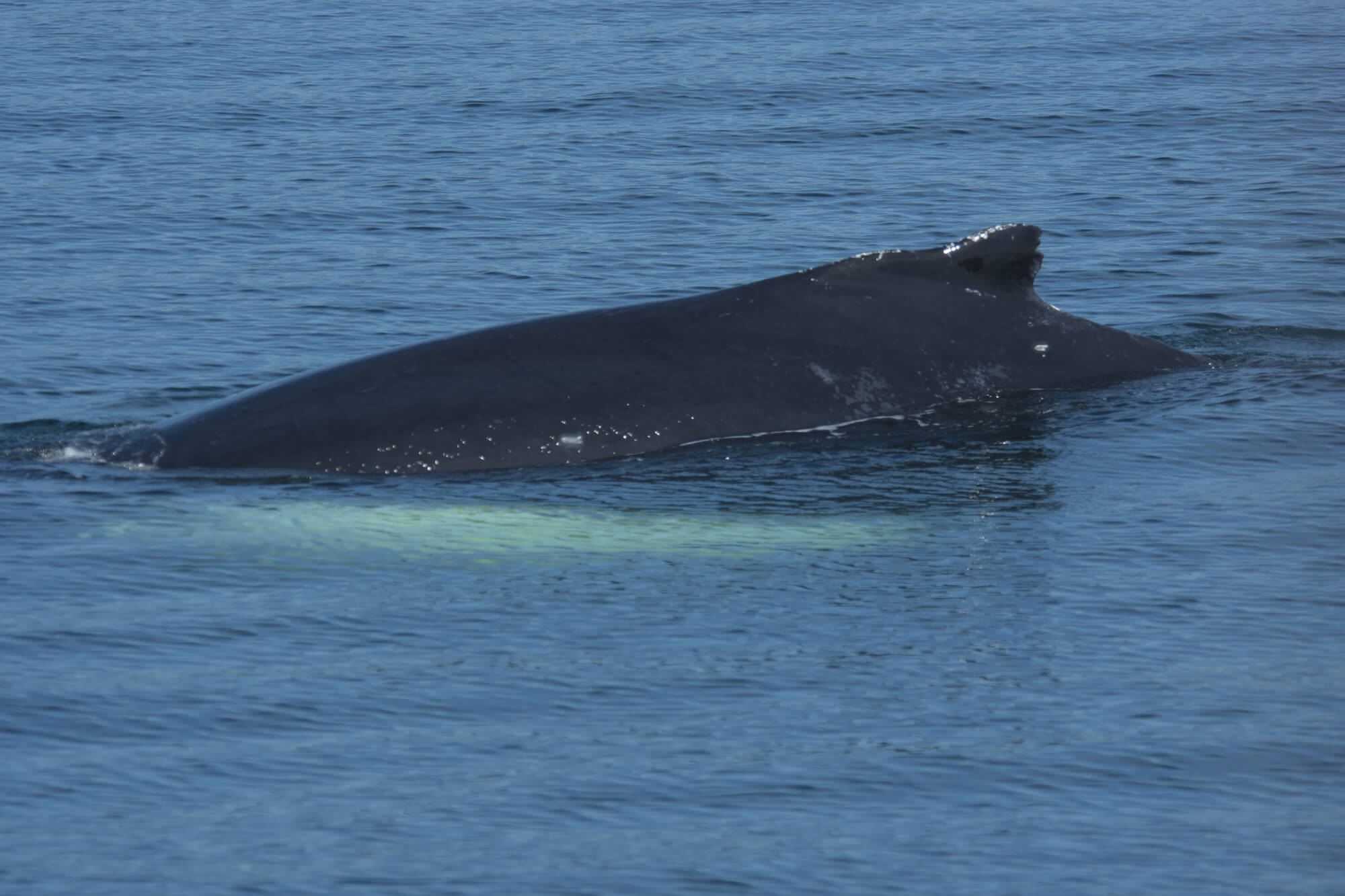 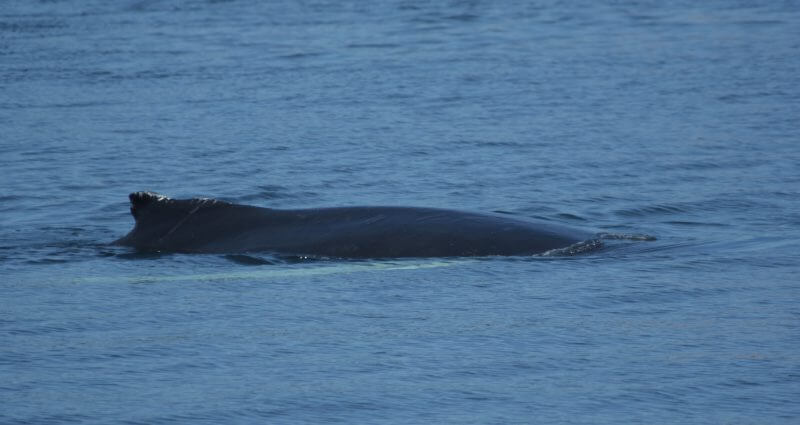 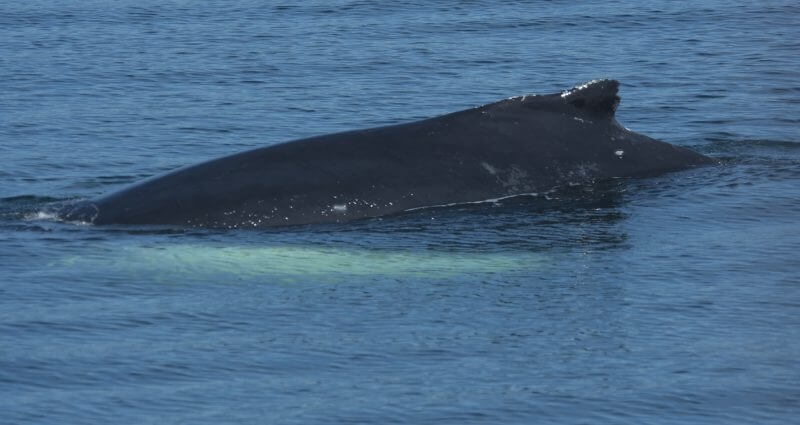 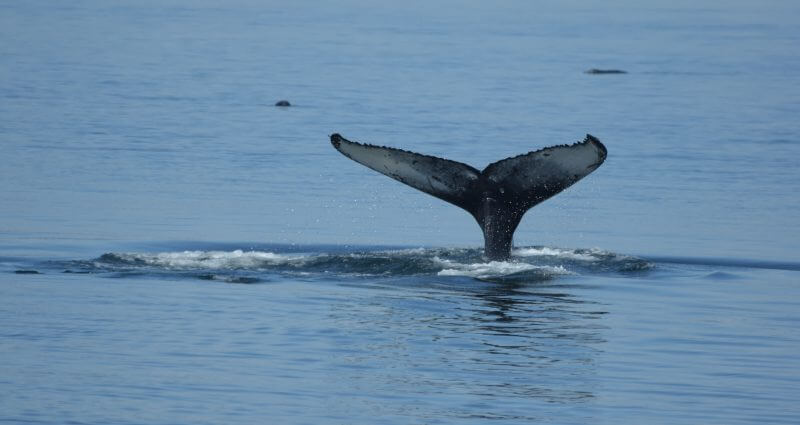 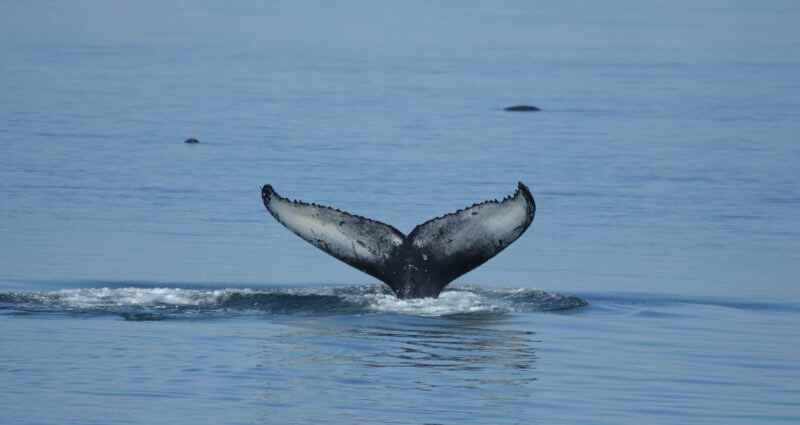 Another humpback whale visited the Marine Park last week: H855. It is recognized by its well rounded dorsal fin that shows a notch at the tip. Its under-tail colour pattern has changed since last year, but some markings are still evident. On each of the two lobes are two small white spots where they meet. In addition, the serrations of the tail did not change, which helped confirm that it was indeed the same animal as the one observed last year. Indeed, H855 was observed last summer swimming near the sides of the well-known Tic Tac Toe. This is why some people nicknamed this young whale “Sudoku”. H855 is probably the third calf of Tic Tac Toe to visit the Marine Park, though biopsies could not confirm their kinship. Tic Tac Toe, who has also been in the Marine Park these past few weeks, does not seem to frequent the same sectors at the same time as H855. Last year, this humpback was observed breaching several times. This year again, it put on such a display for a few lucky observers who happened to be in the right place at the right time.

Breaching behaviour is as impressive as it is enigmatic. What is the sense of expending so much energy to perform such feats? Play, seduction, competition between males… a number of hypotheses have been put forward. And these vary according to different contexts!

It seems that the aerial acrobatics of humpbacks might also serve as a form of communication between groups that are at least four kilometres apart. Additionally, when environmental conditions such as wave noise make communication between individuals more difficult, these breaches are observed more frequently.

In humpbacks, this activity appears to be particularly beneficial for improving their diving abilities. Whales store oxygen mostly in their muscles thanks to myoglobin. Amongst other things, this allows them to stay underwater for extended periods. Myoglobin production increases more quickly in humpbacks than in other whale species. These breaches in their first months of life are believed to allow the muscles to grow faster and thus stimulate the production of myoglobin. Is this why H855 breached several times in 2017? Impossible to say for sure.