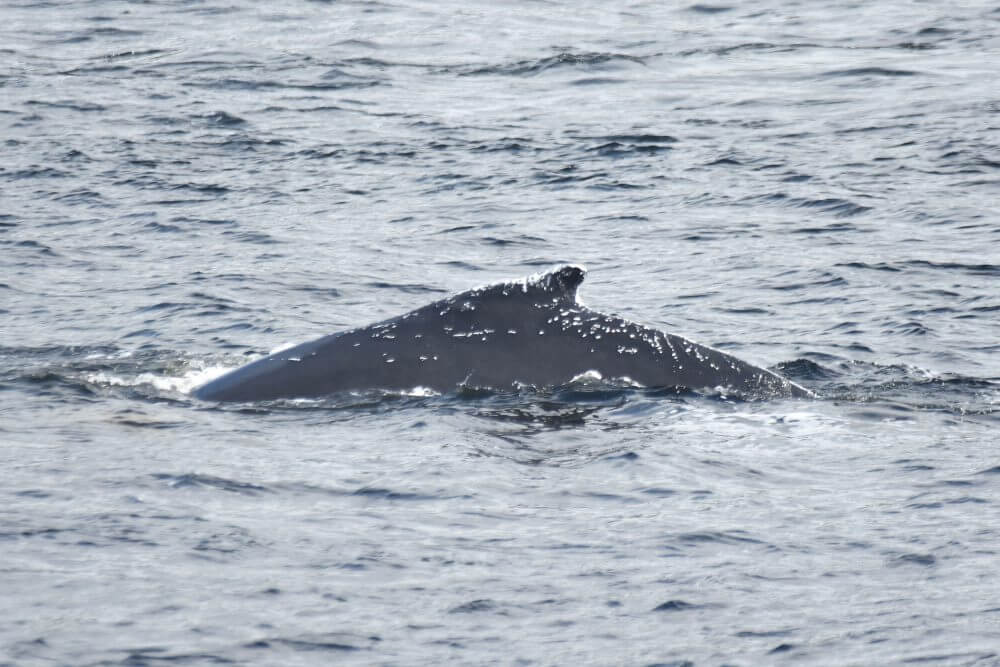 This individual is recognized notably by its small size, its particularly scar-laden dorsal fin, and its habit of not raising its tail when it dives.

This individual without an identification number is one of the Foil calves (H009), a female known to the Mingan Islands Research Station (MICS) team since 1982. He is therefore related to H588, a calf born in 2003 and photographed by the GREMM team in 2009, and High Heels (H725).

In 2016, he explored the marine park sector and the mouth of the Saguenay River, even making an appearance in front of the CIMM. He impressed the gallery with his breathtaking jumps out of the water.

It was sighted in the Mingan Islands area in 2018.

This individual is recognized notably by its small size, its particularly scar-laden dorsal fin, and its habit of not raising its tail when it dives. This young humpback that is in the Estuary is the calf of Fleuret, a female known to the Mingan Island Cetacean Study (MICS) since 1982 and often observed near Gaspé and the Mingan Archipelago and Anticosti Island regions. This calf does not yet have an identification number, but it was observed last year, the year it was born. It is still not known whether it is a male or a female. This is not the first time one of Fleuret’s calves has been exploring the Estuary. In 2009, the GREMM team managed to photograph H588, a calf born in 2003.

Young humpback whales often come to explore the Estuary. They are perhaps searching for new feeding grounds away from competition from other adult humpbacks. Some of them have even adopted the region and we are lucky enough to see them more than once. This was the case of Aramis (Tic Tac Toe’s daughter), Blizzard (a.k.a. Blanche-Neige), Gaspar and Pi-Rat. This juvenile has been exploring the Saguenay-St. Lawrence Marine Park area since early May. This week, we even saw it exploring the mouth of the Saguenay. It was even sighted off of Pointe-Rouge, then in front of the Marine Mammal Interpretation Centre, before finally, to everyone’s surprise, breaching several times near Buoy S8 near Pointe-aux-Vaches. Perhaps this new individual will also adopt the Estuary as a feeding area!