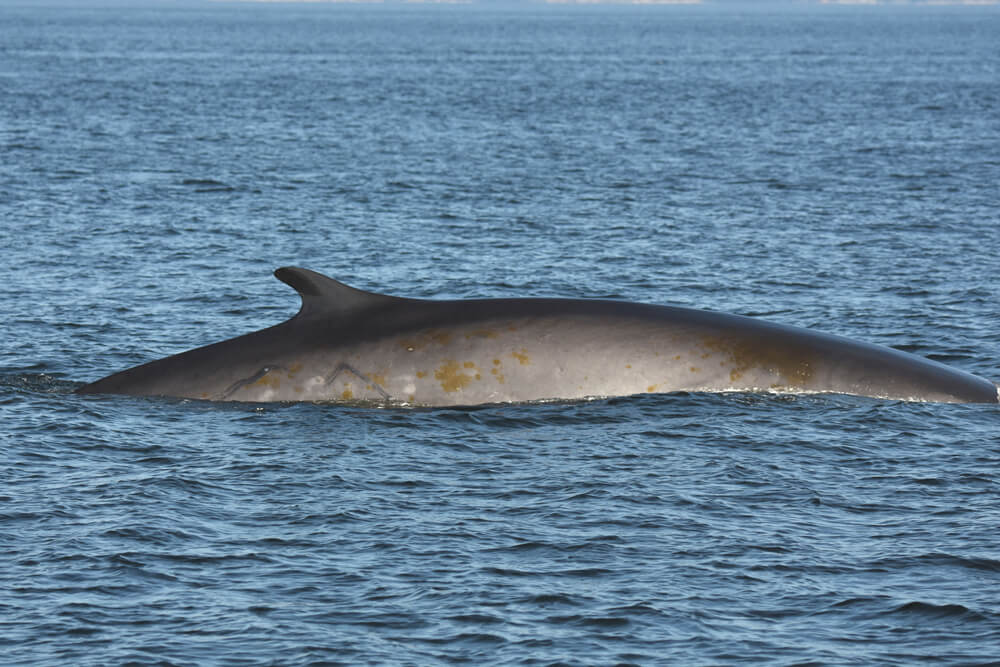 Bp913 was photographed in early September this year. Despite what his faithfulness to the Estuary might suggest (he skipped just two seasons since 1997), Bp913 is not easy to recognize. First of all, his dorsal fin is “perfect”, with no notches or scars. Only the semicircle-shaped tip offers the first clue to differentiate Bp913 from other fin whales. One must then look for the small pale marking just above the white line on the right chevron and the white spots on his right flank, below the dorsal fin. On October 11, five fin whales are feeding at the water surface. Is Bp913 amongst them? That question will only be answered with an excellent photo-identification!

Watching these giants feed is breath-taking! They accelerate and open their mouths to take in thousands of litres of water and tiny prey. Their lower jaw then hangs almost perpendicular to the body, as if it were unhooked, and the throat pouch actually touches the abdomen. When a fin whale takes a gulp, water rushes in to fill its ventral pouch. After six seconds, the mouth closes, filled with some 70,000 litres of sea water; then, in less than a minute, the water is expelled through the baleen to filter out prey. The belly then resumes its usual shape.

To achieve this feat that lasts about ten seconds, whales are specially equipped, including jaws loosely articulated on the skeleton, a soft and ductile tongue that inverts like the finger of a glove, expandable folds on the throat and belly in which elastic nerves (capable of doubling in length!) stretch in order to safeguard against potential injury (they play a role in the command to expel the water). Additionally, a rigid Y-shaped fibrocartilage structure extending from the rostrum to the belly is believed to provide some rigidity to this area of ​​the body during gulping.

The linchpin linking these components and synchronizing this finely-tuned operation is hidden in the soft tissues connecting the two mandibles. It is a small, grapefruit-sized organ. It sends a message to the brain to start and coordinate the prey capturing process after receiving information from vibrissa on the whale’s rostrum that detect the presence of prey in the water. What follows is a gulp that is extraordinary and striking to witness, especially when you know all the mechanics hidden under those tons of flesh, muscle and fat!

This fin whale’s dorsal fin has no notch or scar, but its tip forms an almost perfect semicircle. This is the first indicator to differentiate Bp913 from other individuals. To confirm the ID, one must look for the small pale line just above the white line of the right chevron and the white spots on his right side, below the dorsal fin. Bp 913, although difficult to identify at sea, is among the regular visitors to the Saguenay-St. Lawrence Marine Park. Indeed, he has been identified every year since 1997, with the exceptions of 2001 and 2004. He is also found in the latest edition of the Large Rorqual Catalogue. Last summer, Bp 913 was amongst the first fin whales of the season to be identified (Whale Portraits, Volume 14, Issue 1). He had also been spotted several times during the summer and the GREMM-DFO team even managed to fit him with a radio tag.

The large rorqual photo-census in the Saguenay-St. Lawrence Marine Park will be conducted from June 5 to September 18, 2016, operating out of the ports of Tadoussac, Les Bergeronnes and Les Escoumins. Already, seven different fin whales have been caught by the cameras of two research assistants participating in the program. Besides Bp913, three other individuals have been identified: Bp918, Bp942 and Bp945. These other three fin whales were also present in the Marine Park last summer (Whale Portraits, Volume 14, Issue 5). The remaining three individuals are still unidentified for the time being. We will have to wait until fall and more in-depth lab work to see whether or not these individuals are known.

His dorsal fin being rather generic, we rely on the pale little line above the white line of his chevron to recognize Bp913. We can also go by the white spots on his right flank below the dorsal fin. In 2007 and 2008, he was observed with major visible scars on both sides; one of them could be due to a collision. These marks made him easy to identify during his summers in the Estuary, but today he bears no trace of these injuries. Although Bp913 is a difficult individual to identify, we were able to confirm his presence every year since 1997, with the exceptions of 2001 and 2004. This year, he was photographed on June 19 off Cap Granite, in the company of two other fin whales.

Bp913 is one of several individuals whose identification number is temporary. There are still a few steps to take before these animals are assigned a definitive number and they make their entry into the central catalogue. Excerpt from the central fin whale catalogueThe central catalogue of fin whales in the Estuary has been managed by the GREMM since 1986. We add to it photo compilations of individuals identified throughout the season. The catalogue is divided into two parts: Bp ID and Bp IS. Bp ID comprises those individuals whose photos are of higher quality and whose characteristics are more recognizable to limit the chances of creating a duplicate. Bp IS includes individuals who have not been matched to Bp ID, but who show distinctive features. These distinguishing features might be used to match them during a future foray offshore.