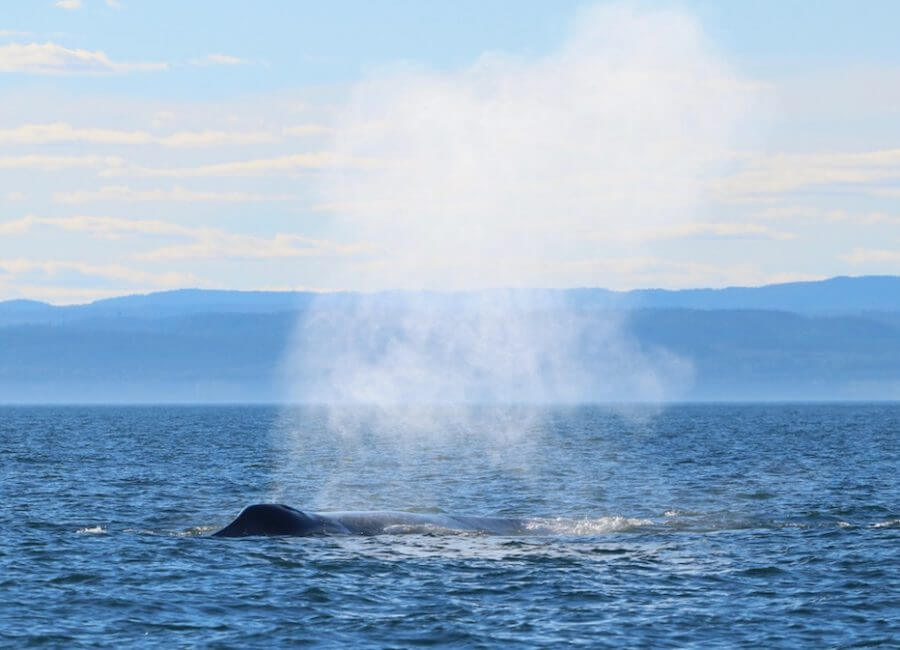 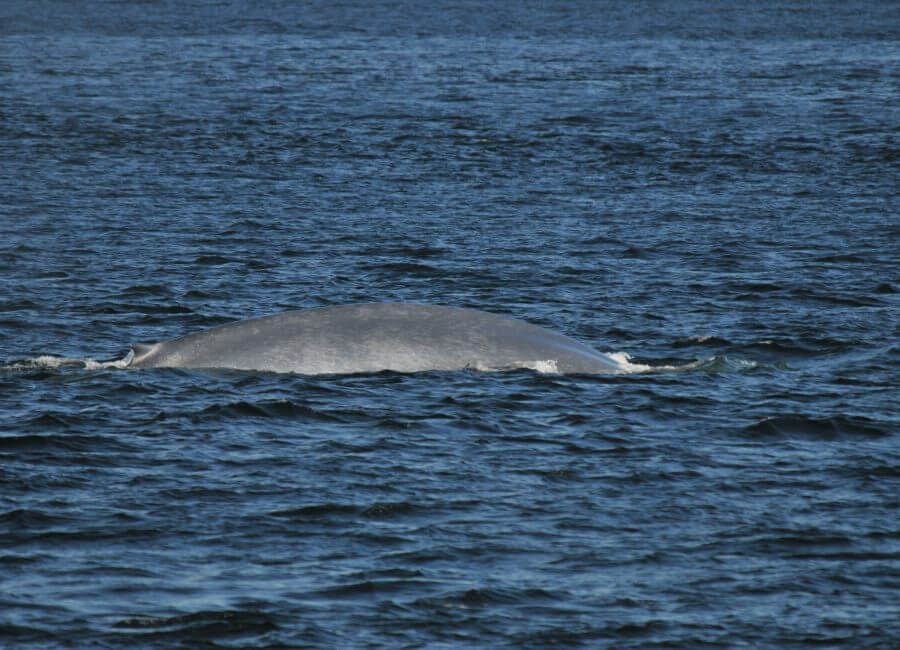 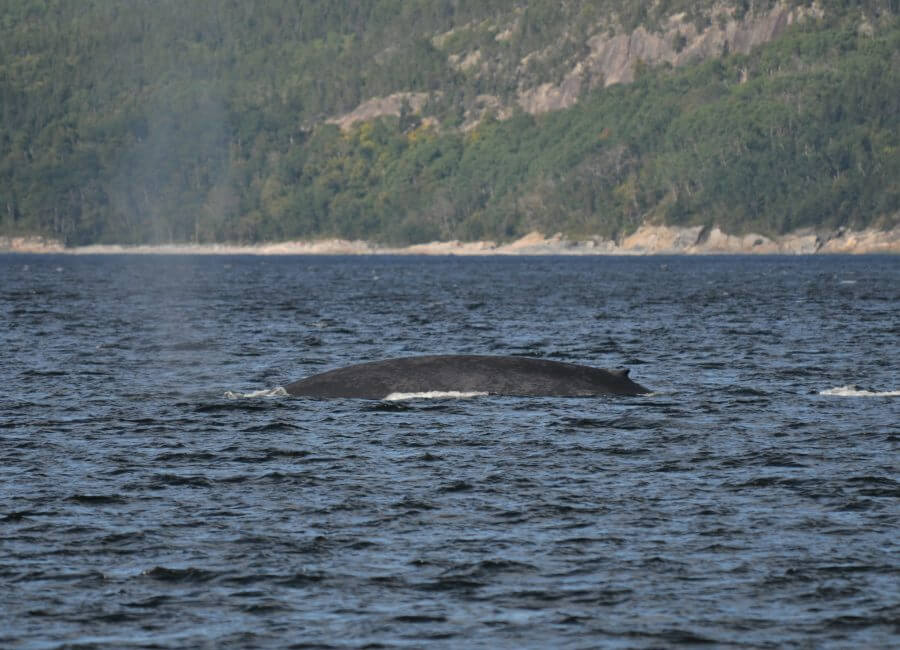 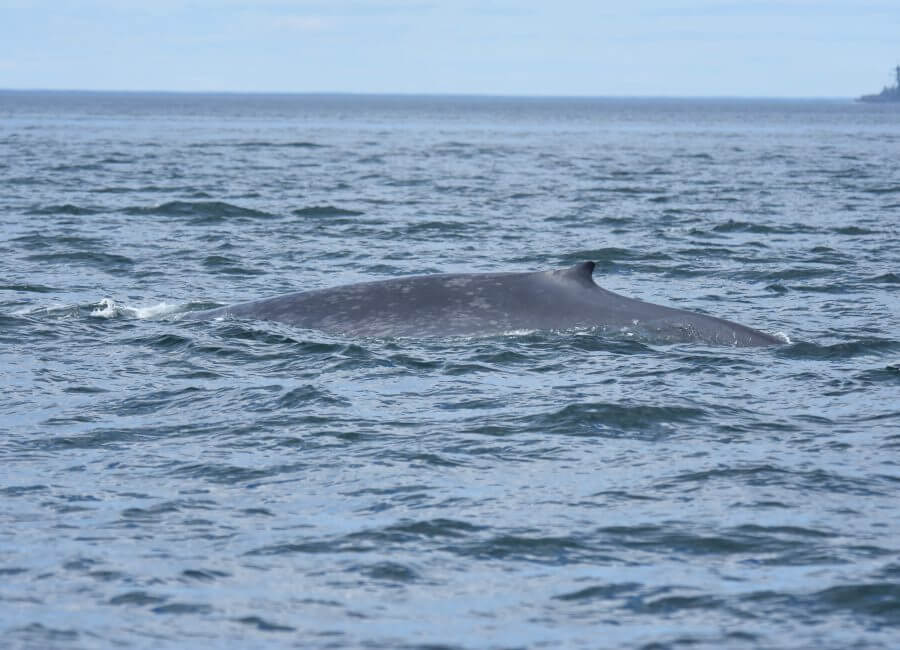 A text by Audrey Tawel-Thibert

A column-shaped spout over six metres high, a body reaching up to a phenomenal 27 metres and bluish-gray in colour with dark speckling: even at a considerable distance, it’s hard to be mistaken… it’s the imposing blue whale! The long-awaited return of this giant to our waters is confirmed, with two individuals having recently been seen. It was on July 23, in Les Escoumins, that our research assistant photographed them. The identity of one of them is soon confirmed: it is B197, a female who in fact is featured in the catalogue of St. Lawrence blue whales kept by the Mingan Island Cetacean Study (MICS), under the name “Pleiades”. There’s just one way to recognize her, and that is to carefully scrutinize her colour pattern.

In 2006, telemetric monitoring was carried out on her within the framework of the large rorqual monitoring project. The suction-cup tag, which held for 24 hours, provided insight into her diving behaviour. Then, in 2008, B197 really stirred up the industry and researchers when she returned with a calf… an extremely rare event, as it was just the 17th blue whale calf documented in the St. Lawrence since 1979!

B197’s visits to our sector have been rather irregular since her first stint here in 1988. Where does she go? She seems to prefer the waters off the Gaspé Peninsula. She was seen in 2004 at Cap de Grosses-Roches, in 2012 off L’Anse-à-Valleau and in 2015 off the northern coast of the Gaspé Peninsula. The migratory patterns of blue whales are still very much an enigma. However, a study led by Véronique Lesage published this year revealed a considerable portion of the seasonal movements of the North Atlantic blue whale population through satellite tracking. The tags deployed in early autumn by the research team, introduced into the fat or the cartilage of the dorsal fin of 24 animals, were mainly aimed at better identifying the areas used by the species in winter to “refuel” and reproduce. Impressive factoid: Symphonie (B244) remained in US waters between mid-December and mid-February, and returned to Canadian waters in mid-March… she travelled a total of 11,918 km during this migration! Substantial results to further shed light on the lives of these fragile mastodons.

Last August 20, about two kilometres off the coast of Cap Granite, while the GREMM-DFO team was attentively monitoring the movements of the humpback whale Irisept (Cocotte) after fitting her with a telemetry tag, two other humpbacks and at least three blue whales were spotted nearby. Among them: female blue whale B197.

In 2006, B197 was also the focus of : telemetric monitoring jointly conducted by these same research teams. This monitoring allowed her dive profiles to be documented over a 24-hour period. Over the course of the first day, she alternated deep dives (80 to 100 m) and shallow dives (20 to 40 m), with or without feeding. In the evening, her dives were even less deep (5 to 30 m). During the night, B197 fed essentially at the surface, and in the early morning, deeper and deeper dives were recorded, stabilizing at 80 to 100 m until the telemetry tag fell off.

What was she eating? Probably her favourite prey: krill. Every mouthful counts for this fragile titan, considered to be endangered. In order to afford this species peace and respect in the Marine Park, a 400 m buffer must be maintained during boat-based observations. Members of the Eco-Whale Alliance have even committed to complying with this distance beyond park boundaries.

In the Marine Park this summer: B137 (Chaparal) and B227 (Eperon) were also identified, namely thanks to the constellation of blue and gray spots that cover their bodies. These two individuals are registered in the MICS-managed blue whale catalogue, which includes over 420 individuals identified to date.